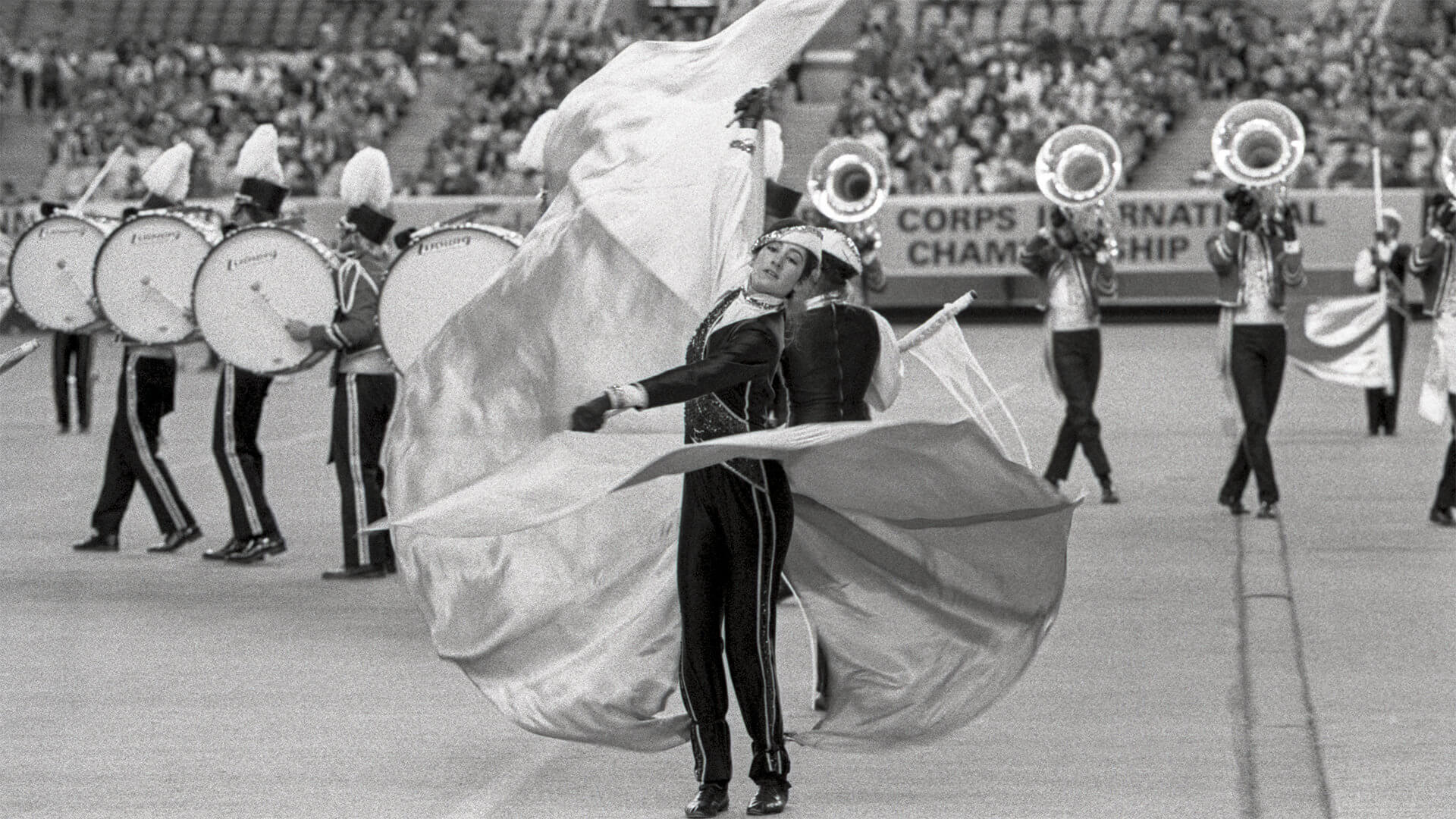 After issues in 1981 that prevented PBS from broadcasting live from Canada, the return of the Drum Corps International World Championships to Montreal in 1982 saw the Finals competition once again on television.

As was done the previous year, the Prelims competition was held within the tight quarters of Molson Stadium at McGill University before moving to the cavernous Olympic Stadium for the Finals. Learning from an echoey 1981 event, in 1982 the performance field was moved back about 15 yards, resulting in less sound getting caught under the stadium’s concrete overhang.

But it wasn’t the overhang that was responsible for the second-place Santa Clara Vanguard coming unglued at the end of their Finals night performance. Surprised and screaming fans reacted so enthusiastically when the corps pulled out an ending of the group’s iconic “Bottle Dance” that members of the corps could not hear themselves side-to-side, resulting in one half of the horns ending the show after the other half in the frigid 41-degree Fahrenheit weather.

Members of the Blue Devils earned their fifth World Championship title in 1982 when the corps became the first to enjoy an undefeated DCI season.

The California corps’ show opened with Rob McConnell’s “T.O.,” which was named after Toronto jazz radio DJ Ted O’Reilly and written as the theme song for his daily show. The song was recorded by McConnell’s Boss Brass, a band comprised of Toronto’s finest studio musicians. Interestingly, McConnell was in the stadium for the 1982 Finals, appearing as co-host of DCI’s live broadcast on PBS.

Getting things underway, the Blue Devils’ visual program started with a large circle of horns surrounded by a large circle of flags. The two circles instantly became two expanding swirls within one another as the music slowly built in intensity. Color guard members utilized flags in addition to wisps of long metallic streamers that reflected the lights of the stadium. Throughout the piece, the guard section amply demonstrated its training in jazz dance, something that was still rather new to the drum corps activity.

Brought back from the corps’ 1980 World Championship-winning show, Hank Levy’s smooth jazz “Pegasus” came off Stan Kenton’s final studio recording, the 1972 “Journey Into Capricorn.” Levy was a jazz composer and saxophonist who often wrote for Kenton and Don Ellis and was known for utilizing unusual time signatures even before Dave Brubeck became recognized for that.

With those wings, color guard designer Shirley Dorritie, who had been with the the Blue Devils organization since 1968, was looking for ways that fabric could be connected from the ankle to as high as the performers could reach, with a goal of adding a different visual element and color to the show beyond rifles and flags.

Instantly, the wings generated a lot of discussion throughout the drum corps community. In a 2007 interview, Dorritie said that was due to what had come before: “When we look at the wings now, we don’t see quite that same contrast,” she said. “Before 1982, people had been using flags that matched their uniforms and we didn’t see a lot of variation of color. What the wings gave us was an opportunity to use color in and of itself.”

The corps’ percussion feature utilizied “Paradox,” a tune composed for “Point of Know Return,” the fifth studio album of the rock band, Kansas, which sold more than four million copies in the U.S. alone and became the band’s highest-charting album.

Gene Puerling’s “One More Time, Chuck Corea” came next, returning in a tightened up format from the corps’ 1981 show. At the time, many drum corps fans thought the title was a typo, but Puerling, creator of the four-part jazz vocal group that was originally formed in 1971 to record commercials, wrote the piece as a tribute to both Chick Corea and Chuck Mangione.

Continuing the exploration of unique uses of fabric, eight (and then 16) members of the Blue Devils color guard created long flowing designs in the air with thick red ribbons akin to the type used in rhythmic gymnastics.

The corps’ closer consisted of “People Alone” from the 1980 Richard Dreyfuss and Amy Irving film. It was originally composed by Lalo Schifrin, the Argentinian pianist and composer best known for scoring Clint Eastwood’s “Dirty Harry” films and the “Theme from Mission: Impossible.”

Ending in dramatic fashion, corps members lined up down the opposite 30-yard lines. Two lines of horns “gated” toward each other and joined into one long company front for a final push, which included a brief but familiar recap of brass arranger Wayne Downey’s original “New York Fantasy” played by the corps in 1980 and 1981.