By Flo Brown Sometimes I think that drum corps should be considered a high-impact sport. If we aren't slamming into each other on the field while learning drill, we're stumbling and falling off the busses at 3 a.m. rest stops or slipping on the tiles in the showers. It seems like every aspect of drum corps (and really, all of real life!) has the potential to be dangerous - especially for people who are naturally clumsy on their own. 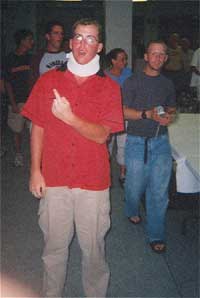 Adam, aka Mullet
Adam was an unlucky guy. He had been given the nickname "Mullet" during the 2002 season after showing up to move-ins with a bad haircut, and since then had been plagued with various misfortunes. ^He was in charge of the Long Ranger, so his duty was to carry around and set up the speaker system. On one particularly unfortunate day, he decided to show off a little by scaling the scaffolding with one hand while holding the Long Ranger with his other. "Of course when I got to that last beam, my hand missed the bar and grabbed air," Mullet reminisced while we discussed his mishaps over the phone recently. "It was really cartoon-like, because I was suspended for a second before I realized I was falling ... and the only thought in my head was 'this is going to hurt.'" He landed on his rear end and managed to break the Long Ranger's fall. Any normal person would have been severely injured by the 20-foot plummet, yet Mullet somehow escaped with just a bruise on his ego. On a free day in Chicago during the 2001 season, Mullet accidentally stubbed his toe in the showers. It wasn't any normal stub, it was the kind that semi-crippled him for his one day of freedom. His friends ran ahead on the streets and taunted him while he dragged his foot behind, wearing his bright red Glassmen bowling shirt while his face became sheet-white from blood loss and exhaustion. "It was like God had heaped all the bad luck in the universe on this poor guy," commented former Glassmen contra Lee Bond. "Too weird to live and too rare to die." Another instance of bad luck befalling our tragic hero was when an airplane flew overhead during a rehearsal in New York. Everyone was told to look up to see what was apparently a very interesting plane, and Mullet unfortunately looked up too fast. Eyewitness accounts all agreed that he was on his knees faster than anyone could say, "Hey look, it's a bird, it's a plane!" He had suffered a whiplash. After a hospital visit and several painkillers, Adam seemed to be OK. He was in a somnambulant haze, and speaking in third person as "The Mullet," but we figured he deserved to have a little escape from his unlucky reality. He spent one week in a neck brace (while developing an odd tan line from it), and was back in business by the next weekend. I can't wait to share my Mullet stories with future drum corps generations, and I hope to see more people like him in years to come. If you've got a Mullet-like person in your drum corps, feel free to contact me and share your stories too. Other stories by Flo Brown: Cleanup crew is heaven Appreciating the social aspects of drum corps Drum corps pervades the bay area Color guard karma The night I thought my caption head lost his mind Post-season relationships Raindance Confessions of a guard captain