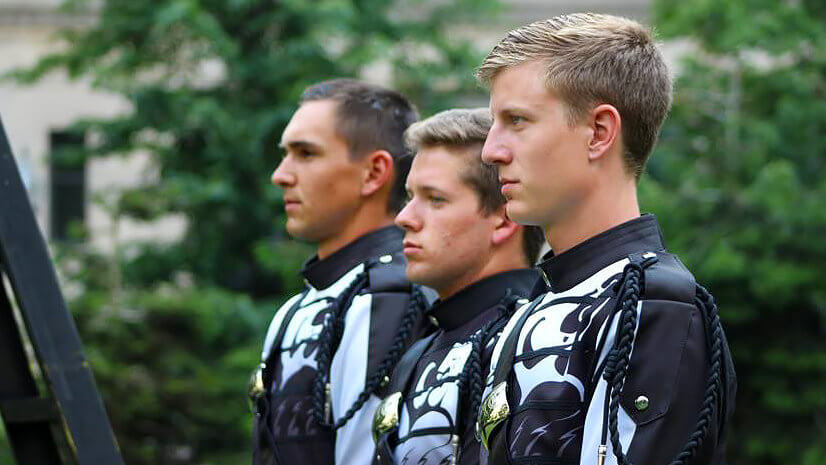 Boston Crusaders drum majors are set to lead their corps in a special performance this Saturday.Photo by: Facebook

• Take a ride in a Blue Devils time machine

The Blue Devils released a video that will take fans 25 years back in time.

Members of the Blue Knights design team and educational staff will present at "Spark! An Ideas Conference" on July 7 (Ogden, Utah) and July 9 (Denver).

The corps will host its third annual “Running with the Stars 5k Fun Run/Walk" on Saturday, June 18 in La Crosse, Wisconsin.

The third episode in the Bluecoats’ video series "True Bloo" features an interview with the corps' center snare drummer.

The corps will host its annual "Spring Fling" on Saturday, June 18 at Cushing Academy in Ashburnham, Massachusetts. The event will feature an exclusive first look at the corps' 2016 merchandise and a full dress rehearsal performance.

The Cadets are searching for a rehearsal site in North Carolina for Sunday, July 31 up to an hour away from Winston-Salem.

Carolina Crown shared a video with highlights from the corps' previous month of spring training rehearsals.

The Colts washed 829 cars at 18 different sites around Dubuque during their annual fundraiser last weekend.

The Columbians showcased their 2016 tour T-shirt which was designed by a member of the corps’ color guard.

The corps’ Marching Music Extravaganza will feature a special preview show on June 17 at Heroes Stadium in San Antonio.

Legends kicked off its 2016 season with the corps’ first spring training rehearsal on June 11.

On Monday, the corps posted a video featuring its brass section captured during a spring training rehearsal in Trafalgar, Indiana.

The corps is hosting its family day and a full dress rehearsal performance on Saturday, June 18 at Monterey Trail High School Stadium.

Music City released a video with highlights from its recent training camp on June 14.

The Oregon Crusaders will debut their 2016 production “Hunted” on Sunday, June 26 at the OC Sneak Peek and Dessert Auction.

Phantom Regiment and the Rockford Symphony Orchestra announced the beginning of Rockford Rhythm, a music program for students ages 12-16.

The corps is hosting its 55th Anniversary “Gathering of the Clans” alumni reuinion at Pioneerland in Cudahy, Wisconsin on Saturday, July 2.

The corps posted its latest episode of “SCV: Backstage” where the Vanguard Cadets design team talks about its 2016 production “The One.”

Shadow is in need of one snare drummer to march with the corps this summer.

Southwind will host a reunion banquet and performance on July 29 in Montgomery, Alabama.

Spartans will host a friends and family day barbeque event on June 26 which will include a performance of the corps' 2016 production “Totem.”