Jeff Fiedler, longtime director of the Cavaliers (and an alum) who lead that corps to six DCI World Championsip titles, and Peggy Twiggs, whose groundbreaking work with the color guards of the 27th Lancers and the Cadets influenced a generation of members and designers (and a 27th Lancers alum), have been elected to the Drum Corps International Hall of Fame for 2005. The two were elected for DCI Hall of Fame selection by the board of directors and DCI hall of fame members, and join Dick Brown, who were elected to the Drum Corps International Hall of Fame by the DCI Hall of Fame Legacy Committee. 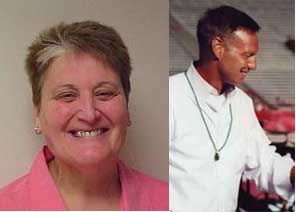 Peggy Twiggs (left) and Jeff Fiedler.
Fiedler joined the Cavalier Cadet corps in 1973, then ascended to the Cavaliers A corps as a baritone player. In 1979 and 1980 (when he aged out) Fiedler served as the corps drum major. From 1980 to 1990, Fiedler was assistant director of personnel and visual caption head of the Cavaliers, and served in other roles with the corps, including stints with the Cavaliers winter guard. In 1990, Fiedler was named the Cavaliers director, a position he still holds. "Jeff's ability to put a successful team together has challenged the members of the Cavaliers to be their very best, and has also served to improve both the color guard and drum corps community," DCI Hall of Famer Adolph DeGrauwe said in his nomination letter. "I am truly honored and humbled to be elected to the DCI Hall of Fame. It is an award that makes me reflect on the number of lives I've affected along the way, as well as enhance my appreciation for the people who are peers, mentors, friends and family, who I have learned from and who have shaped who I am to this point in my life," Fiedler said. "If you look at the performers and alumni of the Cavaliers, you will see the true impact Jeff has had. Their lives have been forever positively enriched. They have a family in the Cavaliers forever. They have a mentor and friend in Jeff. During the many summers on the road, I have met members from the Cavaliers. I have been tremendously impressed with the class they have portrayed. They are a direct reflection of Jeff," DCI Hall of Famer Dave Gibbs said in his nomination letter. Gibbs is the director of the Blue Devils. In addition to his duties with the Cavaliers, Fielder currently is in charge of campus recruiting, scholarships and financial assistance at St. Francis de Sales High School in Chicago, a full-time job from August through May. Margaret "Peggy" Twiggs began her drum corps career with the 27th Lancers of Revere, Mass., in 1967. She aged out there in 1973, when she began instructing that corps color guard. She remained there until 1981, when she joined the instructional staff of the Garfield Cadets, where she remained until 1989 (with some "guest appearances" in 1990). Later she worked with the Emerald Marquis winter guard. Twiggs currently works as a United States probation clerk for the District of Massachusetts. "I can think of nobody who has had a more direct effect on the technical training, accuracy and precision of modern color guard than Peggy," DCI Hall of Famer Michael Cesario said in his nomination letter. "She singularly bridged the gap between old and new drum corps styles, creating champions by emphasizing achievement and personal growth," Cesario said in the letter. "I'm thrilled to say the least," Twiggs said. "And I want to thank each and every person I came across over the years. Especially the people I had the pleasure of teaching," Twiggs said. "As I said, I'm extremely proud to be honored in this way. Drum corps has been such a big part of my life. To be among some of the great names of drum corps is truly an honor. I'm a bit overwhelmed and very happy. Hall of Fame -- wow," Twiggs said. "Peggy has affected so many lives. She is an honorable woman who has gone beyond the call of duty for this activity and it is because of her that guard is what it is today. On a personal level, it is because of her that I am who I am today. Peggy Twiggs is my mentor and someone that will never be forgotten in my eyes," said April Gilligan in a nomination letter. Gilligan is a longtime guard instructor with the Cadets.