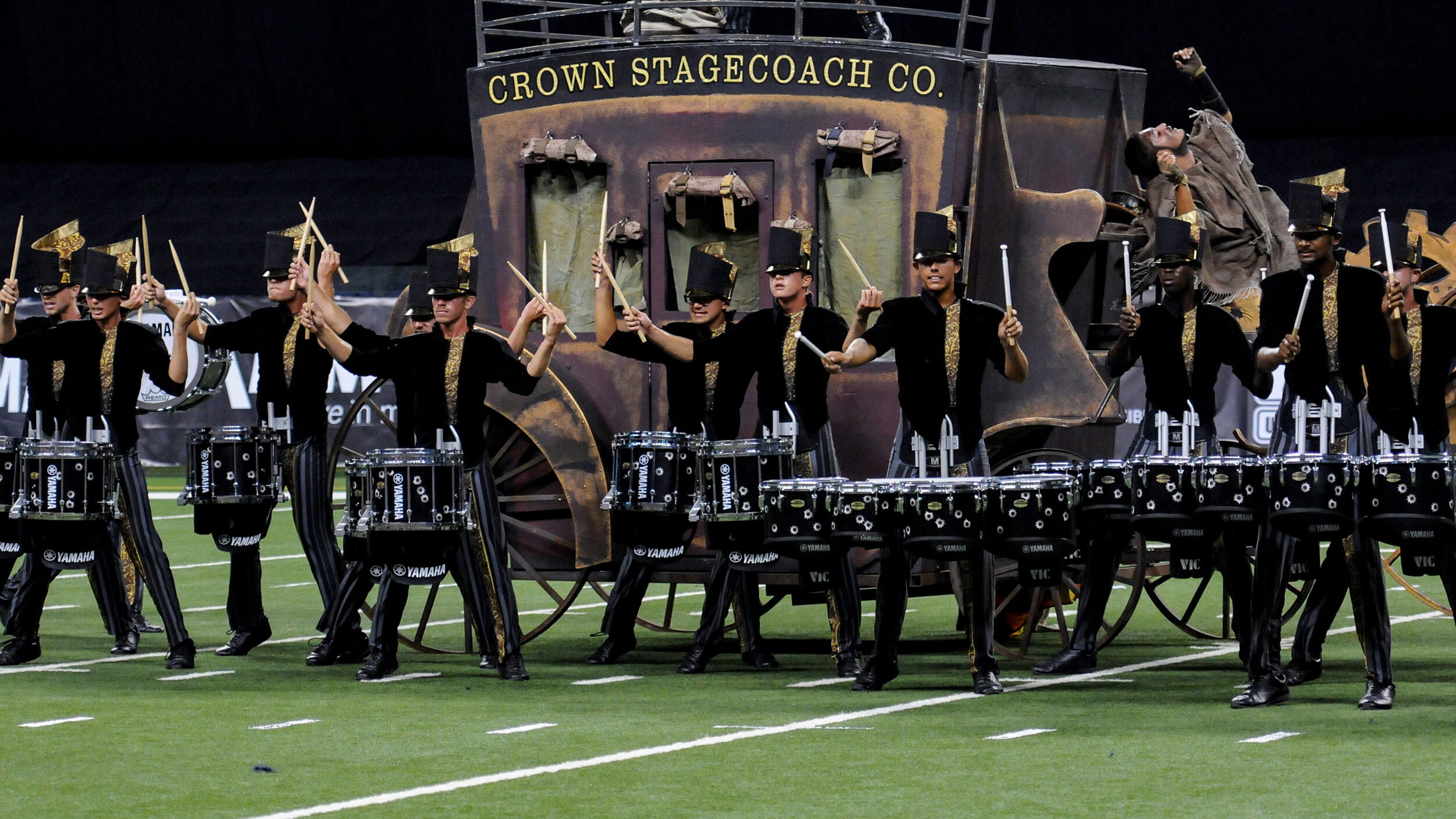 In 2016, Bluecoats won 25 of the 29 DCI Tour events in which it was entered, including all 11 shows heading into the DCI World Championships Finals in Indianapolis.

While Bluecoats’ spread in Finals was only four tenths of a point over Blue Devils’ Shakespearean-themed “The Tempest” and 0.563 points above Carolina Crown’s third-place production, “Down Side Up” earned the Canton, Ohio corps its very first DCI World Championship title.

Carolina Crown’s “Relentless” was a classic tale of vengeance, mercy, and forgiveness set in the Old West. It was the other show in 2016 besides that of Blue Devils to be inspired by William Shakespeare; modeled after his “Titus Andronicus” tragedy from around 1590 that was set during the waning days of the Roman Empire. 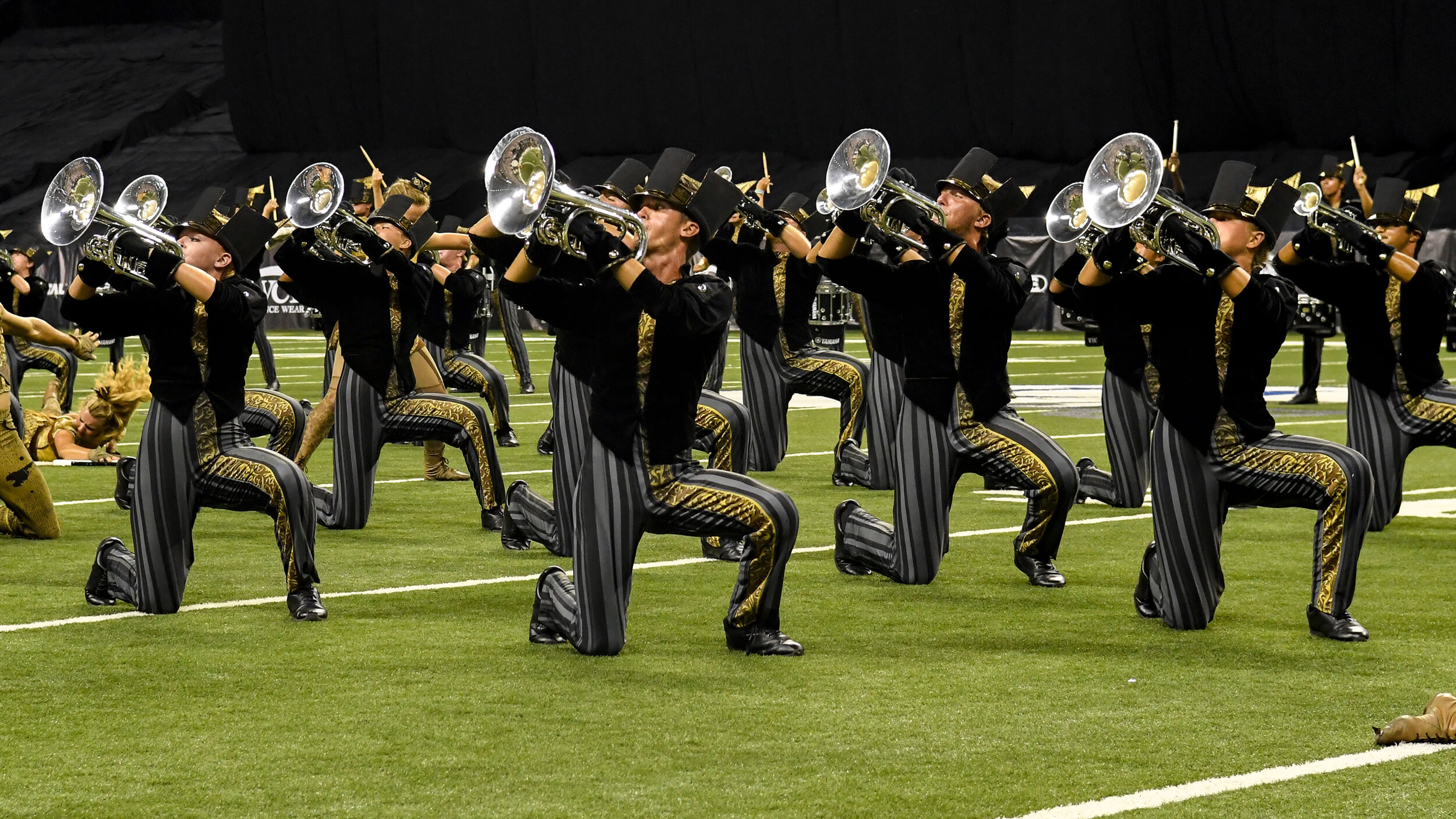 Specifically, the show was built around the lines, “Vengeance is in my heart, death in my hand/Blood and revenge are hammering in my head.” The show also borrowed inspiration from Homer’s ancient “Iliad” and “The Princess Bride,” the William Goldman novel of 1973 and Rob Reiner feature film of 1987, both which brought us the famous utterance, “Hello. My name is Inigo Montoya. You killed my father. Prepare to die.”

Crown wove its own tale of revenge through the setting of a classic Western film, particularly inspired by the famed Sergio Leone “Spaghetti Westerns” of the mid-1960s, and specifically “The Good, The Bad and the Ugly.”

In Crown’s opening segment titled, “Journey,” a life-sized prop stagecoach was introduced, designed in a steampunk manner with large gears in the front. Through the show, it moved from the lower left corner of the field to cross the “desert,” pausing for various climactic episodes to take place on or around it. Color guard costumes were also inspired by a steampunk design sense.

The launch of the voyage was set to Ennio Morricone’s “The Good, the Bad, and the Ugly,” the theme from the 1966 Leone film of the same name. This is the movie that made Clint Eastwood a star, playing the role of “The Man With No Name.” The movie told the story of three gunslingers trying to find buried Confederate gold during the Civil War. Superimposed over the opening music was the introductory xylophone three-note motif from the start of Samuel Barber’s “Medea’s Dance of Vengeance.”

The warbling two-note theme used for each of the three characters (with a different instrument for each) was said to resemble the howling of a coyote and was heard as the stagecoach moved into the center of the field. A thief commandeered the stagecoach and shot the driver, and from then on, he would be hunted down by the son of the man he killed in cold blood.

Next came Morricone’s “Ecstasy of Gold” from the same movie. This is the piece that was performed during the film’s climactic “Mexican standoff,” where the gunslingers were frozen with their guns on each other, knowing that whomever fired first might cause his own death. This led directly to more of the Barber piece, premiered in 1956 and extracted from his 1947 ballet, “Medea,” written for famed choreographer Martha Graham. 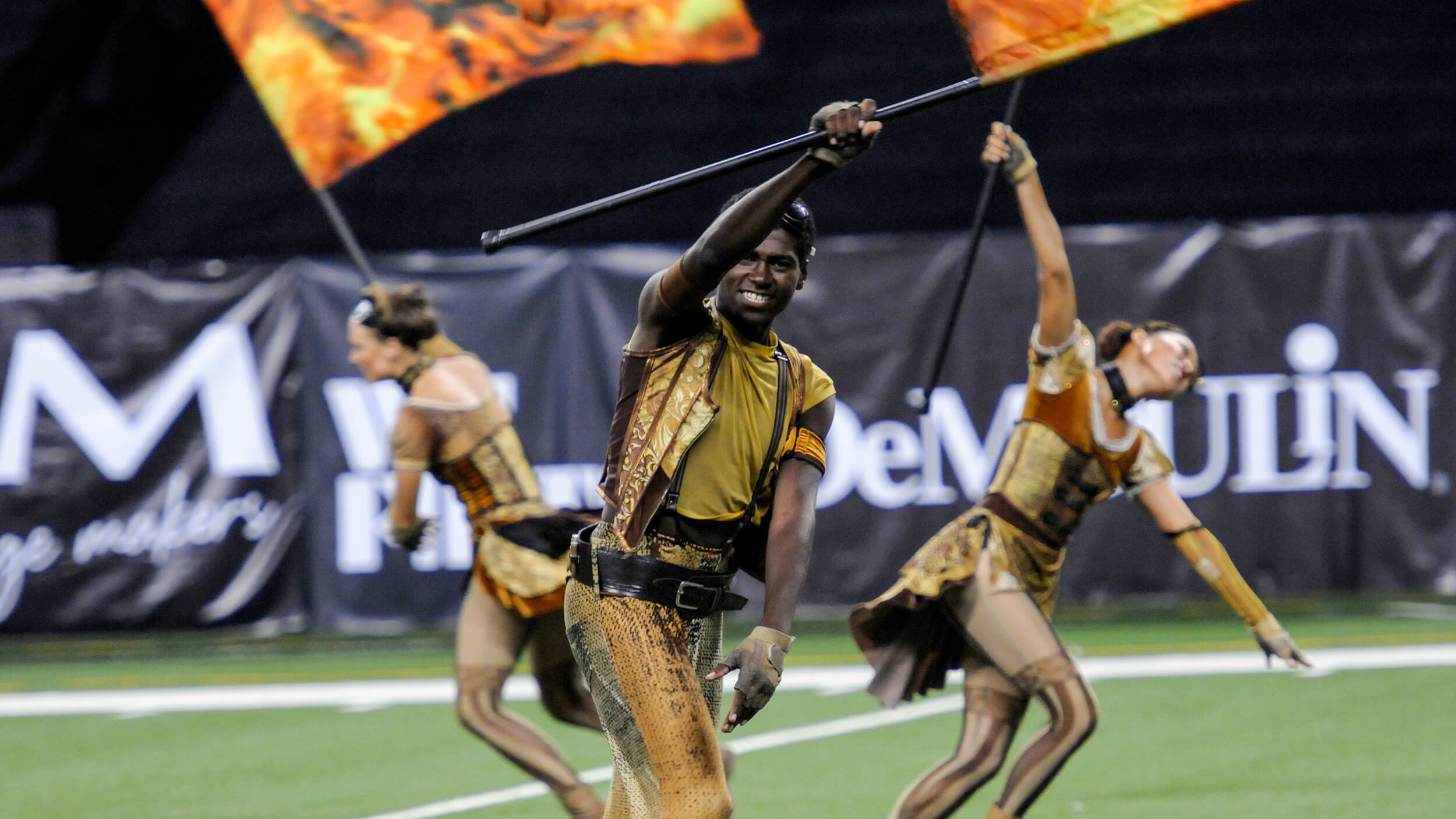 The bass line of “Medea’s Dance of Vengeance,” as well as some other elements from the Barber work, was superimposed under “Flight and Fight,” the third section of Simon Dobson’s 2014 brass band composition, “Journey of the Lone Wolf.” Dobson was inspired by the life of Hungarian composer Béla Bartók, capturing Bartók’s anger in being forced to leave his native Hungary due to the rise of Nazism prior to World War II. This anger was visually expressed by fiery burnt orange flags.

The son of the murdered man started looking for the killer and wound up in a saloon, where he met the femme fatale Roxanne. Music for this section featured a trombone soloist playing “El Tango de Roxanne” from the 2001 film, “Moulin Rouge,” that celebrated the Parisian cabaret best known for the popularization of the can-can. The song, written by Gordon Matthew Sumner, was based on Sting’s 1978 “Roxanne” off The Police debut album, “Outlandos d’Amour.” Color guard members entered through a saloon door while tossing rifles over the door’s frame, then went on to dance with other performers and the cowboy son of the murdered man.

A trumpet player atop the stagecoach started off “Hallelujah” from Leonard Cohen’s 1984 album, “Various Positions.” Though not a success when it was first released, the song has since been recorded by multitudes of other artists and is regarded as one of pop music’s most important “secular hymns.” The tune was earlier performed by Crossmen in 2011 and hinted at by Bluecoats in 2013. Crown mixed it in with “Il Triello (The Trio)” from “The Good, the Bad and the Ugly,” the piece that closed off the aforementioned “Mexican standoff.” The ghost of the murdered father then appeared at his cemetery cross and caught a rifle thrown from 15 yards away.

Next, the bass line from “Medea” appeared under Paul Lovatt-Cooper’s 2009 brass band piece, “Equilibrium.” A return of the main theme from “Medea” led into the vengeful son meeting the killer for the first time, the two engaging in a fight to the death. The son came out victorious and put a rifle up to the killer’s head to dispatch him Old West-style, then, at the urging of another guard member, showed mercy and tossed away the rifle. The corps restated “Hallelujah” while standing in its iconic crown drill formation while other guard members transferred the killer to the inside of the stagecoach. The wagon disappeared from the field with the son standing atop the roof.

This act of mercy was put into the show at the DCI Eastern Classic in Allentown the weekend prior to the World Championships. Earlier, the son had avenged his dad’s murder, but the staff ultimately decided it would be harder for the son to live with the guilt of taking someone’s life, and it was time to put down one’s gun and take the higher road into the western sunset.