By Allison Owen I've tried to write something several times now. I've not yet been able to write anything that I feel makes sense or even begins to explain my summer of 2005. So I'll give it another try. This was the longest and most dynamic summer of my life. I knew going into it that it would seem longer because we were staying in the gym during everydays -- as opposed to my host family last year -- but it really felt like it would never end some days. It also seemed slow for a while in the beginning because I didn't really know anyone since I only joined in May. Moral of that story: Make it a point to meet people before moving in with them, get to know other people. As a member I got to experience new shows, including major regionals. I had never performed in a dome before, and this summer I even got to perform in two over the course of one week. I also performed later in the lineup -- it was pretty cool to be under the lights a few times. 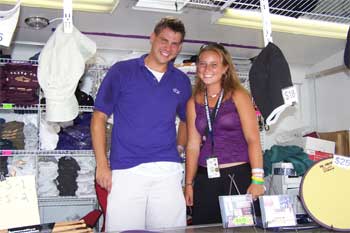 Allison Owen checks in at the souvie booth.
My show rituals this year varied greatly from last year. I didn't have to make sure my flags were taped and taken care of, I didn't have to get into halves or even full uniform before getting on the bus, I didn't have to warm up, and I didn't have the pre-show prayer circle like I was used to. When we arrived at show sites, "the conducting team" (Karl, Jennifer, and I) went to the show coordinator and checked the corps in before returning to the buses to change and find our appropriate sections to take them to gate.

I was lucky enough to have many forms of communication with the outside world this summer. Not only could I receive mail on tour, I could send it. We also got e-mails printed off about once a week. It was a great feeling to go look at the mail and see something with my name on it.

I also received visits from loved ones this season. I had no idea what I was missing out on last summer, but now I know and my summers cannot be complete without a visitor or two. My sponsor, Matt, came to several shows to see me and that was one of the greatest surprises I can imagine. My band director also came to a few shows and that completely made my week. A few of my fellow band members even came with our band director to finals. It was pretty awesome to hang out with friends from school at finals. I had a home show this year. Last year the closest I came to home was Memphis -- which is about eight or nine hours away from where I live. On July 12 I got to play in one of the first stadiums I ever performed in. Not only was it a mere less-than-two-hour trip to my house from the stadium, a good majority of my band came to Sevierville. So last season I didn't get any visitors and this year most of my band came. I can't complain. Speaking of my band, a few guys I went to school with last year march Carolina Crown. I had never had classmates in corps, but when I moved to Central I had this instant "bond" with the guys from Crown. Taylor, Devin and Sean are great guys so I loved getting to see them. There was also a guy from our area, Tom, in the Madison Scouts guard, so I always had something to look forward to when I got to see someone from back home. New for me in 2005 was having a boyfriend on tour. Not only did I try out the "dating on tour" thing, Taylor marches soprano at Crown. It was really different to have someone to care about when you're doing this crazy activity, but it's even crazier when that someone else is doing the same thing somewhere else. After July 9 we were on tour together for basically the rest of the summer, so that made things easier. I actually felt compelled to -- and most certainly did -- watch another corps warm up. I got to meet some pretty cool people from hanging around Crown's horn line so much. Last summer I didn't really get into the whole "souvie" thing. In retrospect I wish I had, but I really didn't buy much at all -- I think I have maybe two shirts from 2004. However, this season I definitely could have owned my own souvie booth with all the shirts and what not that I purchased over the course of the summer. I made friends with some of the souvie crews and I could easily tell when something new came in. Next to our souvie crew, Crown's was my favorite and I often stopped by just to say hey.

Finals week in itself was a completely new experience. Obviously there were the differences in the scheduling and the stadium, but it went further than that for me. As long as the summer felt for me, finals week still snuck up on me. I wasn't ready for it at all. Suddenly everyday occurrences became the last time we would all be together doing that particular thing. I didn't think I would be as sad for the end this time around, seeing as I didn't have a huge section and things of that nature. But I was. I cried more than I had imagined I would and I was sad for the end. At finals I was privileged enough to have a way -cool DCI Media badge, which allowed me to be down near the field for the Cadets and retreat. That was probably one of the coolest things I did all summer because that was the closest I got to being a part of the only retreat of the season. Being down there for retreat helped me wrap up my summer. What used to be a nightly occurrence only happened once this year, and I was right there to hear it. I definitely think it was a good ending to a crazy summer. Ultimately the biggest difference for me in 2005 was that I was not performing. I missed color guard so much more than I had EVER anticipated I would. It was the first time since I started color guard in the eighth grade that I had any form of a break from it, so I had no idea what to expect. Now that I do know how much I missed guard, I don't want to miss out anymore. A song I often hear on the radio is "Big Yellow Taxi," currently sung by Counting Crows. A line from the lyrics that will forever stand out in my mind is "You don't know what you've got 'til it's gone." I couldn't possibly agree more. I think now that I'm pretty much adjusted back to "normal" life, I know what I'm missing back in that crazy drum corps thing. I've had two completely different summers and certainly several more to come. I don't know where I'll be or what I'll be doing, but I know that drum corps is definitely something I can't live without. I can't wait to see what crazy things next summer brings me. Allison Owen, 16, is a junior at Sullivan Central HS in Blountville, Tenn. She's in assistant conductor for Southwind and enjoys dancing, writing, English, guard, photography, having fun and performing. For college she would love to attend the University of Oklahoma and major in journalism or English; however, she'll probably end up at the University of Memphis for in-state tuition's sake.