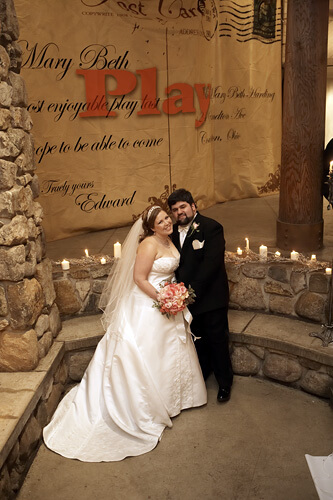 In 2005, the Colts' show "Postcards from Home" featured four gigantic postcards, sent from a fictional "Edward" to his love "Mary Beth." In the final postcard, Edward says he is coming home and would like to speak to Mary's father.

In 2006, the postcards resurfaced at our wedding, a thousand miles from Dubuque in the Carousel House at N.Y.'s Bear Mountain State Park. They were a surprise to the bride, Mary Lass (Phantom Regiment soprano, 2001), from her husband, Ed Eberling (Sound of Long Island, '88, '89, and now a volunteer with the Colts).

It was drum corps that brought us together, and it was great to have this unusual twist as the backdrop to an off-the-field story!