This past weekend was the first camp that I've flown to in over a year. It was pretty weird since I have gotten used to driving myself, but it was pretty easy to get back into the swing of things when it comes to flying. I had an 8 a.m. flight out of Ft. Lauderdale, Fla., which meant I had to be at the airport around 6:30. Yes! I arrived in Philadelphia around 10:45 a.m. and spent the next five or so hours talking to myself. OK, so I wasn't really talking to myself, but I was bored out of my mind! 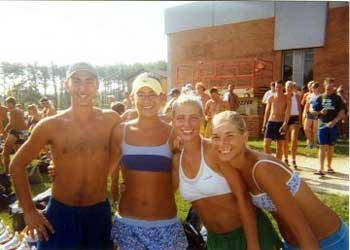 From left to right: Matt Haines, me, Laura Westmoreland, and Tracy Shandor on our way back to rehearsal in North Carolina in 2003.
I was the only Cadet person waiting to get picked up, until I spotted my friend Chris on his way to the pretzel stand. I later found out there was another guy who was sleeping just a few minutes away. A few more people trickled in soon after, so needless to say, I was pretty entertained. Chris had his laptop so we watched some "Family Guy." Then I pretended that I could play drums and messed around some on a drum pad -- the key word here being "messed." I don't quite have the hands that I want at the moment. About an hour or two later, the bus came to pick us up. We had a few extra minutes since our driver had to wait for some more people to come on the bus, so a few of us went back inside to grab something to eat before the ride. They had a Coke machine that took credit cards -- pretty amazing. Once we arrived at the school, some exciting things took place, such as unloading the equipment truck in the dark, and getting ready for rehearsal. This weekend we got another one of our pieces, which is called "Machine." I guess you could say it is the drum feature piece, but don't worry. There's some "throwdown" horn stuff in there for all of you brass buffs. The drum line is sick -- what an incredible book, and boy, are they playing it well. I know everything was recorded at camp, but I don't know if anything will be on yea.org. I don't want to promise that something will go up, but there's a chance something might! As for the brass line -- we are loud. Friday night at camp, some of us played the game "MAD GAB." Basically, there is a short saying written on a small card. One team holds up the card and can see what the card they are holding up is saying. What the other team is looking at is a strange sort of jumbled sentence that is a bunch of words that don't make sense together. So, you have to say the sentence over and over to figure out what it really is on the other side of the card. For example, " Ice hull who chew" is actually " I salute you." It really is -- go ahead and sound it out. It was pretty fun to say the least. We're pretty dorky, what can I say. I took a lot of pictures this weekend, which I am glad about. I love my picture albums.
After an incredible camp, some of us went back to Allentown to watch the Super Bowl. It was a grim night for Eagles fans all over the country. How sad. I wanted the Eagles to win, mainly because it would make all of my friends who are crazed Eagles fans happy. Unfortunately, they were crushed by the Patriots. Today was my first day of training for my new job at the Macaroni Grill. I think I'm really going to love this job. Everyone has to wear a tie, since it is a part of the uniform. I definitely didn't know how to tie one, so I had to have someone who worked there do it for me. I tried to figure it out, but after 20 minutes of almost choking myself, I decided it would be best to let them do it for me. So I have more training today, tomorrow and Friday. I also have two quizzes tomorrow which I have to study for. Lots of stuff to memorize, but I am confident that I will crush them. On Saturday I'm going to fill in for someone and play trumpet at a Renaissance festival. I get to dress up in a costume and act like I'm from the 1400s. Awesome. After that I'm pretty sure I'll be heading down to a winter guard show at my old high school. Another late night -- hopefully some of this article made sense! As for now, I'm going to have to get some sleep. I have a long night of studying, studying, and more studying ahead of me. Have a wonderful week! Paula Hyman is a fourth-year member of the Cadets where she is the mellophone section leader. She is 20 years old and currently single. Originally from South Florida, Paula recently made the move to Allentown, Pa., to work for YEA!, the umbrella organization of the Cadets, Crossmen and the U.S. Scholastic Band Association. She ages out in 2006. Past columns by Paula Hyman: An action-packed Tuesday Home again Camp and Florida Paradise awaits me With the new year comes change Cadets camp a success; Time for winter break Notes from a weekend off Banquets, show and tell -- report from a Cadets camp A Cadets camp report Macy's Day extravaganza Your not-so-typical day Trick-or-treating at a band show Trick-or-treating at a band show It's a show day! What's a free day? Rest stop or heaven? The Move to Allentown Welcome back to the real world