Paula Hyman will be contributing columns to DCI.org each Wednesday. Here's her 10th installment. What have I been up to? This past weekend was the first in a while where I didn't have something to do, and I made sure to take advantage of this opportunity. I woke up around 1:30 p.m., which was splendid. Some people might accuse me of wasting the day, but I enjoyed some much-needed sleep/laying around time. Once I was fully awake, I decided to clean my room because it was getting to be pretty heinous. It feels so nice to have a clean room -- or to at least be able to walk from the bed to the door without tripping over things. 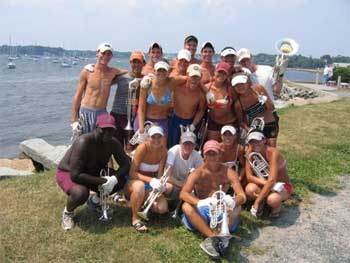 The Cadets relax in Bristol.
I do still have to do a little work on my closet, I'm not going to lie. Once my room-cleaning extravaganza came to a close, I figured it would be a good idea to practice some mello and trumpet -- so I did. After practicing, I decided to watch TV and pass out on the couch for a bit -- only because I could. I'm not a big TV watcher, but I do enjoy it on occasion. After my nap my roommate Mary and I went to Giant to grab a few essentials. Giant is a supermarket, but it is not actually enormous like its name may suggest. One would just expect the name "Giant" means that this establishment would be two or three stories tall -- maybe even the biggest grocery store ever. However, that is not the case. Even though Giant is nothing out of the ordinary, it is a fine supermarket and I do enjoy the fact that they are open 24 hours a day, and for that, Giant, I thank you. So let me get back on track here. What were these so-called "essentials" that Mary and I HAD to pick up? Well, we decided that Saturday night would be movie marathon night -- I know, that sounds intense. We wanted to continue to eat healthy, so we decided to pick up a few low-carb items. In our cart was some movie theatre butter popcorn and Reese's Pieces. (You'll see what we did with those two items in a few minutes) as well as some Wild Cherry Pepsi. Also on the list were some Tostitos gold and salsa, along with baked sour cream and cheddar Ruffles. So much detail right now. On our way home we made sure to stop at Blockbuster to get some movies. The only one worth mentioning is "Mean Girls." Now at first you may be skeptical of this movie, because we both were, but Mary's sister told her to watch it. She did and thought it was hilarious, so she decided that I must see it. Now my favorite comedy of all time is "Dumb and Dumber," however, I am surprised to say that "Mean Girls" is currently my favorite movie. It is hilarious. So if you haven't seen it, go rent it or you'll be missing out! All right back to the popcorn and Reese's pieces. You basically just pour in the Reese's pieces into the bowl of popcorn. The heat melts them a little and it tastes incredible -- unless you hate popcorn or Reese's in which you probably shouldn't eat it. But If you're a fan of the two, this is a must try. I definitely talk about food in every article I write -- oh well. My sister called me Saturday night and said she had two tickets to the Nutcracker in NYC. She couldn't make it, but wanted to know if Mary and I wanted to go. We of course said yes and Sunday was a pretty early weekend wake up (9 a.m.). We were on the road by 10 a.m. and got to NY a little before noon. Our first stop, Rosa's Pizza. Here I go again with the food, but this place is incredible. If you are ever remotely close to College Point, N.Y., you must go there. I'm talking remotely close being two hours or less. They have this chicken Caesar pizza that is amazing. Its basically pizza without red sauce, just a thin layer of cheese and then chicken Caesar salad on top. AHHHHH -- incredible. After lunch with my sister, we got dropped off at the subway station in Flushing, N.Y., and made our journey to the city. We had some time to kill once we got there so we did some shopping. I didn't buy anything, which is good because I don't have any money. We actually only ended up watching about the first five minutes of the Nutcracker. There were a ton of screaming kids in there (in a pretty small hall), so we decided to walk around the city some before heading out. We tried to find the Cold Stone Creamery but I forgot exactly where it was and my sources weren't answering their phones so we settled for Gelato -- which is close enough to ice cream. After a short stay at my sister's house, we then made the trip to the Newark Airport to pick up our friend, Christen. (Cadets mellophone from 2000 to 2003). She teaches at Capital Regiment now and was flying back home from camp, so we picked her up. I get to see her pretty often but it's always fun to hang out with her. We then drove back to Allentown and I went to sleep. That's pretty much it -- basically it was a nice change to finally have a weekend off! This coming weekend we have a camp. I'm of course extremely anxious to get there. We now have the ballad as well as two other pieces of the show, which is exciting. Jay is pounding out show music. He is ridiculous -- in that good way. Actually before camp there is a big get-together in Boston. There will be about 50 or so Cadets from the past and present there so it will definitely be a good time. I'll let you know how all that goes. Paula Hyman is a fourth-year member of the Cadets where she is the mellophone section leader. She is 20 years old and currently single. Originally from South Florida, Paula recently made the move to Allentown, Pa., to work for YEA!, the umbrella organization of the Cadets, Crossmen and the U.S. Scholastic Band Association. She ages out in 2006. Past columns by Paula Hyman: Banquets, show and tell -- report from a Cadets camp A Cadets camp report Macy's Day extravaganza Your not-so-typical day Trick-or-treating at a band show Trick-or-treating at a band show It's a show day! What's a free day? Rest stop or heaven? The Move to Allentown Welcome back to the real world