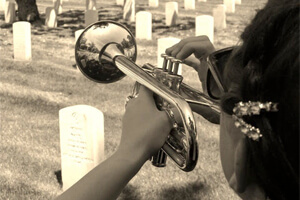 This Memorial Day, as we contemplate the sacrifices made by the men and women of our armed services, we encourage all to also consider what others are already doing to help those who have given of their time, energies—and yes, even their lives—to keep this country safe and free.

In 2000, the United States Congress passed a law that stated all military veterans were entitled to a military funeral, complete with a bugler playing "Taps." That traditional bugle melody is part of the final honor a grateful nation can provide its deceased veterans. However, while all veterans are entitled to this honor, there have not been enough buglers available in the armed forces to provide the service.

Thomas Day founded Bugles Across America (BAA) in 2000 to help assure that more veterans would receive a proper send-off. Day is a United States Marine Corps veteran, a former member of the Cavaliers and a co-founder of the Anaheim Kingsmen. Shortly after founding BAA, the organization was assisting at about 5,000 funerals a year.

Today, that figure is up to around 35,000 funerals annually and growing.

"Part of that increase is due to members of BAA getting out into the communities and spreading the word, part is due to BAA being featured on multitudes of local and national television news broadcasts and in various newspapers and magazines, and part is due to the branches of the military increasingly requesting help from the organization," Day said. 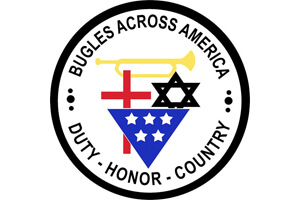 However, there just aren't enough military buglers to supply the increased need at veterans' funerals. About 1,800 veterans pass away every day. Those families who wish a military funeral have to contend with the fact that the combined forces of the military have only about 400 active duty official trumpet players, and recent government cuts have greatly reduced that number.

Due to those budgetary considerations, the Coast Guard now relies on Bugles Across America for the funerals of its veterans. Air Force budget cuts have turned that branch to BAA for assistance. The Navy uses BAA at least 10 times a day just for funerals out of the Great Lakes Naval Training Center north of Chicago. A few weeks ago, the Jefferson Barracks National Cemetery outside St. Louis asked BAA to come in and assume duties for "Taps" at veterans' funerals. Each day, BAA serves all five branches of the military in some way.

To accomplish that, Bugles Across America relies on 7,500 members who range in age from 11 to 86. About 2,000 of the members are female. All are volunteers, including Day, who does dozens of funerals every week.

Still, it takes money to put out the training materials and get the word out to more people, approximately $85,000 each year. The organization has no rent as it's currently run out of Day's house in suburban Chicago. He put his entire retirement fund from the State of Illinois into starting the organization and spreading the word.

play a bugle, trumpet or flugelhorn for military funerals. One of the unique facets of the organization is that it will work with individuals who are not familiar with brass instruments to learn to play the 24 notes of "Taps." 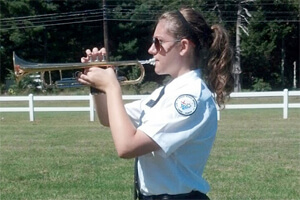 From BAA free of charge, beginners are sent two books on how to learn to play "Taps." They also receive a CD to play along with, a trumpet mouthpiece and a plastic device into which the mouthpiece is inserted so that the future BAA volunteer gets a feel for the pressure needed to make the brass instrument "speak." Those items also are distributed free of charge.

And after one can comfortably sound "Taps" on the mouthpiece, Bugles Across America will even send those individuals a horn, also without charge. The organization finds these instruments on eBay, at flea markets and from generous donors. Each is repaired and reconditioned by Steve Winans, the Valve Doctor, from Lemont, Ill.

If anyone has bugles (valves or no vales), trumpets or flugelhorns that are no longer being used, Bugles Across America would be grateful to receive them as a donation. Your unused instruments could provide comfort for grieving families of deceased veterans. It's a win-win situation for all.

It should be stressed that BAA receives no government funding. Donations are collected by the organization via its website, PayPal and Network for Good.

Running the organization for more than a decade, Day admits that the letters and comments he's received from families have made him cry. "The handshakes and hugs I receive from the families are the greatest memories," he said. "There is no amount of money that could buy the feeling I and others get after playing 'Taps,' when the families come over to say 'thanks.' The members of BAA all feel this way. It's much like the brotherhood of drum corps."

We hope you all consider doing what you can to help out this wonderful organization. Many drum corps members and fans have already signed up to be available for military funerals. Many more have made contributions of money and instruments. We encourage you all to check out the following website to learn more.
BuglesAcrossAmerica.org

Sounding the bugle on Veterans Day
Fanfare: Bugles Across America