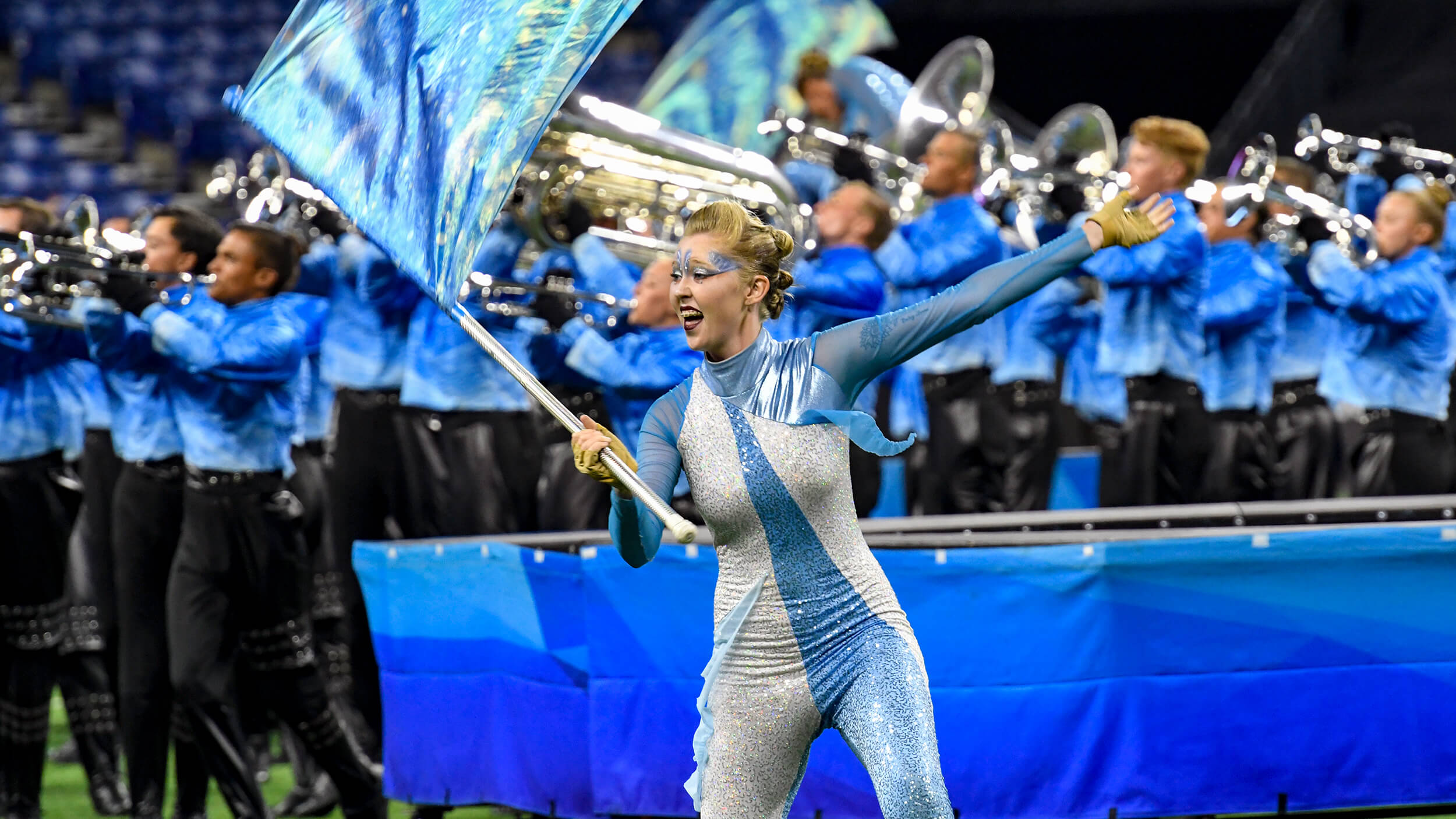 • Spotlight on the 2019 Colts color guard
• Louisiana Stars contingent in the LSU Golden Band
• What it takes for Mandarins to serve 61k meals a season
• And more!

The Academy is conducting a job search for a paid business assistant who will manage a variety of tasks.

Blue Stars is seeking volunteers to help prepare and staff the corps’ Oktoberfest brat stand in LaCrosse, Wisconsin September 24-29. The corps will find free housing for out-of-towners if necessary.

The Cadets’ 85thAnniversary and Celebration of 50 Years of Cadet Women will be held October 12-14 in Garfield, New Jersey, including The Cadets Bowling and Social Spectacular, the Platinum Leadership Gourmet Luncheon and Fundraiser at one of New Jersey’s top gourmet restaurants, and The Cadets' 2019 Hall of Fame Induction Ceremony buffet dinner and dance.

Free shipping is available on all CrownStore orders over $25 through Labor Day.

ICYMI: check out this video of members and staff of The Cavaliers thanking recently deceased corps founder Don Warren for founding the corps in 1948. What is said about the value of the drum corps experience made possible by Warren’s selfless devotion to The Cavaliers can apply to any corps, reminding us why the activity is so important to so many lives.

This video of Colts’ color guard going through its paces in rehearsal is all one needs to show someone who wonders if drum corps guards really work all that hard.

All Crossmen color guard equipment, uniforms, bows, and shields from the corps’ 2019 “Valkyrie” show are now for sale.

Gold created this video thanking each of its 2019 donors.

Jersey Surf has a variety of electronic equipment for sale, including keyboards, microphones, monitors, and a mixing console.

Audition packets for all sections of Madison Scouts’ 2020 corps are now available for purchase.

More than 61,000 meals were prepared for Mandarins members this summer. Take a short peek at what it takes to serve a corps three meals and a snack every day of the season.

Music City’s 2019 show featured some extremely colorful mouse flags guard costumes, as well as classic formal brass and percussion uniforms. All are now available for purchase and are perfect for the ensemble thinking of doing their own salute to rodentia.

Inclement weather forced the members of Pacific Crest to cut short their DCI World Championships Prelims warm-up and seek refuge on their buses. But the unwelcomed weather didn’t prevent the corps from earning 14th place, its highest World Championship finish to date.

A corps’ season isn’t really over until its trucks get cleaned out. Phantom Regiment is undertaking that task on September 7 in South Beloit, Illinois. Lunch will be provided.

Here’s a newly-released video of Raiders’ drum line warming up in the lot prior to the DCI Open Class Finals.

Those interested in joining Santa Clara Vanguard in 2020 should fill out an interest form to be the first to learn the details about the corps’ audition dates and sites in Dallas, Los Angeles, San Jose, Houston, and Orlando.

Take a listen to Seattle Cascades’ horn line warming up in the lot prior to the DCI World Championship Prelims.

In case you were wondering what Shadow’s strikingly colorful guard costumes looked like up close, check out this collection of photos.

Fans of marching cymbal lines won’t want to miss this video of Southwind’s cymbal line warming up for the DCI World Championships Prelims.

Spartans fans will want to celebrate the corps’ first DCI Open Class World Championship in 12 years with this celebratory T-shirt.

Troopers is seeking a paid food services manager for the 2020 season, with duties beginning during the corps’ November audition weekend.