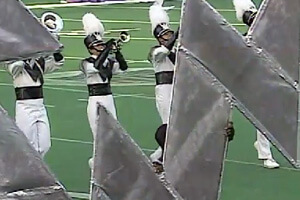 1995 Carolina Crown
This week's download takes a look at 1995, a year that holds many fond memories for corps fans. It was a year that brought us the Cavaliers' stellar update of Gustav Holst's "The Planets," 40th anniversary tributes to the end of World War II by the Cadets of Bergen County and Bluecoats, the Madison Scouts' tour-de-force of pure adrenaline-laced Spanish-flavored entertainment, and the Colts' highest placing show ever. This week only, the Audio Performance Download bundle featuring the top 12 Finalists of 1995 is available for a discounted price of $15.99 (regularly $19.99), along with the Video Performance Download of Carolina Crown's '95 production for just $3.99 (regularly $4.99). View all 1995 downloads. 1995 was also notable for the introduction of Carolina Crown into the World Class World Championship Finals, a position the corps has held every year since with the exception of 2002. After winning the Division II Championship in 1993, '95 was only Crown's second year participating as a World Class (then Division I) corps. At the start, the operative term of Crown's 1995 "Stormworks" show is "aggression," with lightning bolts emblazoned on the uniforms, and massive rumbling thunder sheets and giant lightning bolt props emphasizing the theme. The title of the production was also the title of Steven Melillo's opening composition. Melillo, a popular composer for concert band, was no stranger to drum corps, having composed original music for the all-age champion Bushwackers in 1990.
1995 Carolina Crown performance excerpt.

The following ballad of Enya's "Watermark" is typical of the beautiful moments that have long been associated with the corps. Umbrellas come out as gentle crashing surf sounds float over the field, created by a variety of rain sticks, an ocean drum (a two-sided hand drum encasing hundreds of small pieces of shot that is gently rocked from side to side), and a circular rainmaker machine. More weather-related compositions follow, until the end when the entire corps forms the shape of lightning. As if hit by an unseen bolt, they fall to the ground upon the conclusion of the show. It would take several years for the corps to rediscover the ground as a staging place for a variety of body movements, a unique identity to the corps' contemporary productions. In 1995, while the members laid on the ground as if stunned by the electrical force of the concluding lightning bolt, they would have been equally stunned had they, in their moment of mock-dazed stupor, seen into the future to get a glimpse of the corps' significance today. This week only, you can save on 1995 World Championship Audio and Video Performance Downloads on the DCI Fan Network. Buy the 1995 Carolina Crown Video Performance Download. (Available this week only for $3.99. Regular price: $4.99.) Buy the Audio Performance Download bundle of all 12 Finalists from 1995. (Available this week only for $15.99. Regular price: $19.99.) Offer ends Monday, Jan., 31 at 8:30 a.m. ET.