By Allison Owen Well, it's Monday evening right now, and I just got home from Memphis. I'm a little bit tired and a little bit sore, but I had a great time this weekend at my first -- and most certainly not last -- camp with Memphis Sound. 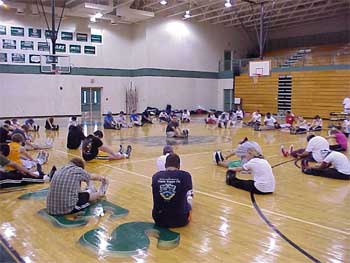 Memphis Sound stretches out this past weekend.
I arrived at Cordova High School Friday evening a little bit apprehensive; I didn't know what exactly to expect, since I missed their first audition date. We weren't able to check in yet so I put my things away and a friend of mine, Kyle, soon greeted me. Then he introduced me to some vets from last year and I got to talk to some other guard people. Everyone I met was very nice and I enjoyed talking to each of them. After a corps meeting we broke into sectionals and the guard took a few minutes to introduce ourselves and to get to know each other. We then worked on movement all evening. The guard caption heads, Emily and Kristin, were great about helping us individually and giving us instruction on things we can work on for the next camp. Saturday was a long but eventful day for all the sections. The guard went for a jog in the morning before we worked on flag and weapon technique, spins, and tosses; the brass and percussion worked on their exercises and learning the opener. At one point during the day, the guard went tracking through a local neighborhood, to work on marching while doing flag work in the wind. In the afternoon there was also a visual rehearsal that included a long stretch and marching basics.   It was a day full of work and new things for vets and rookies alike; I think a lot of things were accomplished and the corps improved from the morning to the evening. We spent Sunday mostly preparing for the show and tell. There was a winter guard using the high school gym so the show and tell was moved to the auditorium and it was decided that the guard would not perform at this camp. Each guard member met with Emily and Kristin for a few minutes to find out our status while the rest of the guard had time to work individually. I am happy to say that during my meeting I was offered a spot -- which I am also pleased to accept -- for the 2004 season. Before the show and tell there was a corps meeting in which we were given some fund-raising opportunities as well as told our tentative tour schedule for 2004. I was very excited to hear of some of the show opportunities that Memphis will be having this summer. During the show and tell the brass and percussion played some exercises and the opener for this summer, which I really enjoyed. The corps then had to clean the school before we could leave; once the school was inspected by the staff we were free to go home. The first flight I was able to schedule out of Memphis was Monday, so I had to miss one day of school. I really don't mind saying that it was worth it. I really enjoyed my weekend with Memphis Sound from the minute I arrived until the minute I left, and I'm still enjoying it. Sure there were times when I wanted to go to sleep or take a break instead of work, but I'm glad we worked all weekend because I learned things that I can work on to improve for the next camp. I have found my home for the summer; the staff was great and everyone else that I met was really nice. I feel like I fit in at Memphis Sound and I'm enjoying the time I spend there. Keep checking in as my rookie year unfolds; now that I've found my drum corps home, the journey is just beginning.
Allison Owen is a sophomore at Science Hill High School in Johnson City, Tenn., who plans to audition for a corps in November. "I'm in the SHHS guard and I like writing, dancing, performing, traveling, photography and having fun. As for after high school/college, I don't know what I want to do ... I just know I would like to do something dealing with color guard, computers or writing," Owen said.