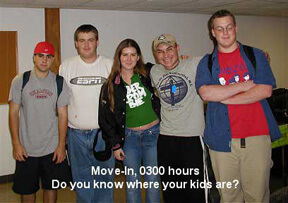 Max Mersinger says: "This was taken at about 3:30 in the morning on the first night of move-in in Heniker, N.H. I'm the second from the left in the ESPN shirt. I'm sorry but I can't remember the names of the others in the picture besides Jose (second from right). "This was after delays and more delays on a flight from Ft. Lauderdale, Fla., to Boston and a two-hour drive, or was it three, to Heniker. I was cut like three weeks later, but I enjoyed every minute of it. "I'm a 17-year-old junior at Flanagan High School in Pembroke Pines, Fla., and I was (for a short time) a part of the Euphonium line of the 2002 Boston Crusaders." Thanks Max! Editor's note: Forzato will return on Monday, March 17. We have received a lot of Forzato submissions -- and we are running them in the order they are received -- so if we haven't run your submission yet, we will eventually. Keep them coming! Would you like to submit a picture for Forzato? E-mail it to dave@dci.org along with where and when the photo was taken, and send some biographical information about yourself as well. We'll give you full credit. Also, let us know if you want your e-mail address included, to get feedback from other drum corps fans.