Paula Hyman, a member of the Cadets from 2002-2006, is in Japan during the next month-and-a-half as a member of the Aimachi Marching Band, a group based near Nagoya. She will share her experiences in a series of DCI.org columns over the next few weeks. My name is Paula Hyman. You may remember me from columns I wrote for DCI.org in 2004 and 2005. Right now I am in Japan, marching as a member of a band called Aimachi. Over the course of the next month, I will be writing to you about my experiences both on and off the "field." I put field in quotation marks because we march on a gym floor, not a football field like in America, but I will get to all of that in a bit. 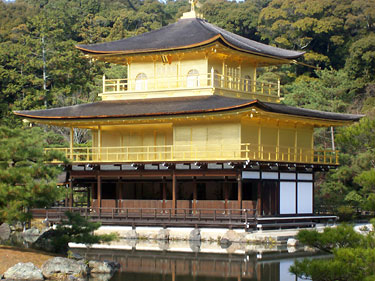 The Golden Temple in Kyoto.
How did I end up in Japan? When I was teaching at UCLA's band camp with a couple of other Cadets members in 2005, Gordon Henderson, the associate director of bands at UCLA, showed us videos of Aimachi. I thought the shows were very entertaining and I was intrigued, but I never thought I'd end up marching there. Fast forward one year, and here I am sitting at a computer in Handa City near Nagoya, Japan. Thanks to Gordon and the very generous people here at Aimachi, two other Cadets members (Matt Haines, baritone 2001-2003 and drum major in 2004 and Chris Gow, baritone 2003, 2005) and I are able to have this incredible experience. Matt and Chris have been in Japan since mid-October when Aimachi's season started. I had commitments teaching marching band, so I wasn't able to leave until last week. 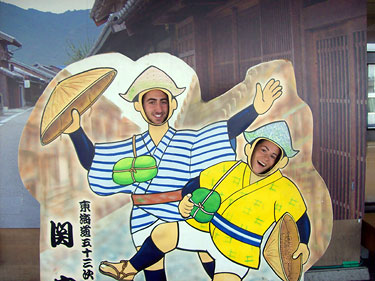 Matt and me at a rest stop on our way to Tenri City, which is the birthplace of the Tenri religion. Many of the Aimachi members follow this religion. It means "the joyous life."
It is one week since I've been in Japan, and I have already experienced so much. I flew into Nagoya airport last Wednesday night and immediately went to rehearsal. In Eastern-style cars, the steering wheel is on the right. Needless to say, I was a little freaked out at first when a car would pass by and the person in what would be the driver's seat in America, was reading a book or sleeping!

During that rehearsal, we only worked on music in the horn arc that night, so it was easy to get into. There are quite a few Japanese members in Aimachi that were members of the Cadets with me so it was great to see all of them. On Thursday morning, the marching rehearsals began, and I went to the gym with Matt and Tatsuo (a long-time member of the trumpet section) to start learning this year's opener to the show.

Japanese fields, or floors are totally different than the typical football field in America. In Japan, the center line is called the 20-yard line, which is the equivalent to our 50-yard line. That is the only solid vertical line on the floor. On each side of the 20 there is a 15, 10 and 5-yard line, but they are only marked with small pieces of tape in the shape of a plus sign every eight steps. Going horizontally across the middle of the field is another line also called the 15-yard line. You could say it is the equivalent to a football field's hash markings, but it is solid all the way across the floor. 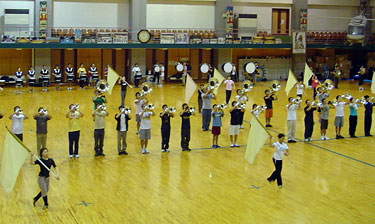 Horizontal and vertical lines divide the floor into quarters. A series of "plus signs" are used to mark additional "yard lines."
To learn the drill formations, I was given a coordinate sheet with my dots on it, but even the way that those are written down is completely different than what I am used to from my marching band and drum corps experiences. Also, the standard marching band/drum corps 8 (steps) to 5 (yards) step size used to mark off coordinates is different. It is closer to an American 7 to 5 or maybe even a little bigger. So as you can imagine, trying to learn all of these new processes has been a little bit confusing.

I got through most of the production's opener before lunch and had the rest learned before practice that night. Everyone here is extremely nice and helpful. Some members of the trumpet section came to rehearsal early and the whole section stayed late to help me learn more of the show. I didn't ask any of them to do that for me, but they came up to me and said that they would help me.

The gym that we rehearse in. The big hanging picture is the founder of the Aimachi church. We bow to him every time we enter or exit the gym.
We rehearse for about two hours each night and all day and night on Sunday, kind of like a day of spring training with the Cadets. On Sunday night, I did a full run through of the show with the band. Now, I have to work on memorizing the show music. As I learn the music, I have been putting it with the drill. I learn more and more each day, and soon enough I will be playing the whole show.

I am also doing my best to learn the Japanese language. Chris and Matt know a lot more than I do since they've been here since October. Chris generally chooses not to speak it unless he has to, and I found out from one of the guard members that some of the things Matt tries to say in Japanese don't make sense. But at least he's trying, right? He seemed a little crushed that he wasn't exactly the master he had thought he was. He still knows more than I do though, so I need to catch up quick!

Have a question for me about my time in Japan? Send me an e-mail at thepaula9@yahoo.com.

Paula Hyman marched as a member of the Cadets from 2002-2006, in the mellophone section. She was section leader in 2004-2005, and horn sergeant in 2006. Hyman lives in South Florida where she teaches various marching bands and middle school brass sections. She will work with Teal Sound during the 2007 drum corps season.