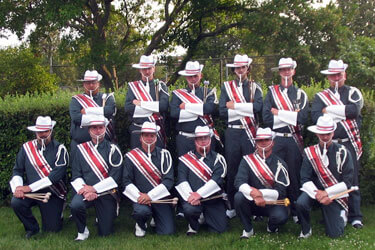 The Madison Scouts Alumni Reunion Project front line.
I remember the first time we all put on the uniforms to do the performance in Sun Prairie, Wis. I watched 240 men put on solid green pants and shirts. It really looked like simple janitorial suits. Then they added that magical sash. I call it a "magical" sash because it transformed a simple janitorial suit into the "Superman Suit." The citation cord, the gauntlets, the spats and that special Madison hat with the red band around it all melded together to create what looked like the 1981 Madison Scouts. I remember standing at the truck in Sun Prairie before the show, watching 111 horn players in that uniform come marching up the hill with their hats tucked neatly in their left arm. I started crying uncontrollably. It was an amazing sight. I thought, "Oh my God, I'm really back in the Madison Scouts!" The performance was a lot of fun. When the crowd went crazy during the company front in "Ice Castles," I cried yet again. That's when I realized that with each performance, this thing was coming closer to ending. I realized at that point that after Semifinals, we wouldn't be doing this anymore. I started to wish our Semifinals performance would never happen. With each camp weekend we got closer to each other, the show got better, we had more fun, we met more guys, we learned more about each other, we learned more about the traditions and rich history of the Madison Scouts, and we grew as brothers and as men. I think for me, the high point of the entire experience came the Wednesday night of the DCI World Championship week. We put on an exhibition with Jubal, Capital Sound and the Madison Scouts. We watched the Scouts perform and they went up to watch us. Seeing our little brothers screaming for us and knowing that we were all part of the same team was a truly spiritual experience. At the conclusion of the show, the 240 members of the MSARP, the current Scouts and other alumni in the stands (more than 450 in total) got together to sing "You'll Never Walk Alone." As we stood there arm-in-arm and brother-to-brother, I think we all realized that this was so much greater than each of us. This was 68 years of the Madison Scouts coming together to erase the years between us and join us all together in the traditions and family. Scott Boerma conducted us and during the silences between phrases, it was amazingly silent. You could have heard a pin drop in that stadium. That moment more than anything else summarized why I had to do this project. 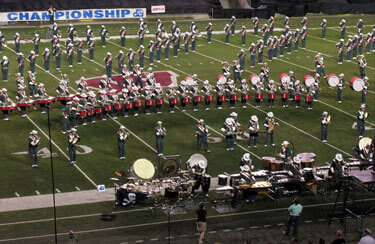 Members of the Madison Scouts Alumni Reunion Project perform the drum solo section of their World Championship performance at Camp Randall Stadium in Madison.
The night of Semifinals is kind of a blur to me. We all had dinner together and we wore our front line members' hockey jerseys we had made. We went to the stadium and prepared for our final night together. The moment the first scout alum walked out of the tunnel, Camp Randall erupted in applause. I got goose bumps as we set up the equipment. The first hit in "The Way We Were" was deafening, both from the 111-man horn line and from the crowd going berserk. The rest of the show just flew by. I don't remember much. I find the most exciting performances of my career are like that. You prepare for hours, spend thousands of dollars and it's over in a heartbeat. There was a party at the Stadium Bar that night and the next day. They showed the video of our performance over and over again. I was unable to go as I had to leave very early the next morning to get back to New Jersey to be at a DCA show with the Bushwackers. That's when I found out about my "close up." Everyone started talking about "that tambourine player who was jamming out during the drum solo." I was like, "Hey, that was me!" Next thing I knew, I was being treated like a conquering hero. All my friends started e-mailing and calling me. Michael Boo even contacted me and asked me to write this piece. While the fame and fortune (yeah, right) that goes with all of this is wonderful, nothing in drum corps is as wonderful as the experience I had preparing for it. It wasn't about performing at Semifinals. It was really about playing with my brothers, learning about the "old" Madison scouts, being part of the history and traditions, reestablishing connections with friends I hadn't seen in nearly 20 years, and being reminded that I will truly "Never Walk Alone."