Andy Dittrich, who wrote a series of columns for us in 2004 and into last summer, will be exploring how drum corps folks stay focused and conditioned in the off-season in a new series of articles. Matt Verburg is the subject this week. Verburg is a student at the University of Central Florida, and in 2005 served as the battery visual technician at Southwind. What techniques do you find to be best effective in maintaining personal musical growth in the off-season? Education of others. By rehashing, reliving, and replicating the information given to you in the form of teaching someone else, you are solidifying that knowledge and categorically internalizing the information to new depths of consciousness. Did you perform in high school or college marching bands during your off-seasons? Did you find that performing with these groups helped you in maintaining or building on the things you learned and perfected during the summer? Why? One year at high school, three at college. Some things, such as consistency, discipline, and a refined ear deteriorate somewhat due to the lower standards, and fellow marchers who are not as dedicated as drum corps brothers. Other things, like leadership skills and teaching skills, are not something every rookie learns on the field in drum corps, but when they return to these other marching activities, the opportunities to learn these skills are endless. Because you have been given all this information, and discover a glaring need for it back home, with the right attitude toward improvement of the ensemble and people around you, the corps member should take full advantage and be a leader. 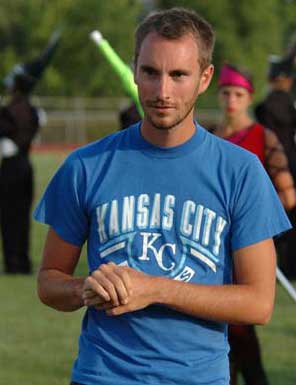 Matt Verburg
Did you, or do you currently, teach high school or college marching band during your off-seasons? Do you find that instructing or writing helps you maintain or build on the things you have learned and perfected during the summer? Why?College staff one year, high school staff sixth year current. There is a continued growth associated with educating younger marching members, but not much in performance areas. I'm sure it doesn't help my posture or diddle quality -- you get the point -- but my organization skills, time management, people skills, and other valuable off-the-field skills are continually sharpened by instilling those abilities into others.Do you recommend any specific exercises for drum corps veterans during the off-season? Physically? A total body, cross-training-type workout routine that focuses on cardiovascular health and the core/center of the body. It doesn't have to be over the top or hyperaggressive, but consistent. Bare minimum every spring semester. Mentally? Teach. Somewhere. Something. Anything.Do you believe that drum corps should encompass a large part of a veteran's life during the off-season? What do you think about winter camps? What do you think about preparation between winter camps?Not at all. A former victim of drum corps burnout myself, I believe that every member should have something else to focus on for a few months. Relax, forget the stresses of tour, have fun at school, make other friends, etc. Of course, keep in contact with those you were close to, but return to long-term career goals, grades, clubs, and work hard in other areas. Hopefully you are maintaining your body and musical skills for your own good, not only for the corps. Personally, there are too many camps. November, December, January, cool. May, then everydays, definitely. But with the decentralization of the corps memberships, and the costs associated with travel, as well as the aforementioned burnout factor, camps could be minimized with little negative effects if handled properly. I've grown to distrust some types of members in their preparation for camps, but with technological advances, strides to the positive are being made. ++++++++ I know I have not been able to vary the perspectives to other drum corps, however, in this case, we have jumped from membership to staff. Matt was a visual tech for Southwind in 2005, and marched in the Southwind snare line in 1999-2000, and 2002-2003. Interesting about Matt's perspective as an instructor is his commentary on winter camps. Burnout is a definite factor in the activity, and winter camps can be a definite contributor to that. I have always thought camps were the most difficult part of the drum corps season. Physically and mentally tossing yourself into something so intense for just a couple of days, and then having very little time to recover from it, is difficult. The decentralization of drum corps is something I have discussed in previous columns, most notably my article on the struggle to field a corps in Texas (congratulations to Revolution on a great season, by the way). Drum corps camps are hard to get to, hard to recover from, but right now, are important to many corps as a way of maintaining membership. It would be a high-trust relationship to not hold many camps during the winter. Not only do you have to trust everyone who showed up early, to show up to everydays, but you have to trust them to practice and improve.