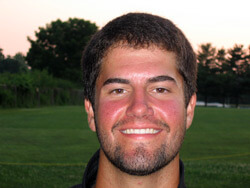 Scott Nelson
Scott Nelson, a 16-year-old second-year tenor drummer with Pacific Crest, knows a little something about working through the pain. He severely pulled a muscle during a pre-season camp and was unable to march in the show until the DCI Eastern Classic (Allentown, Pa.) in early July. Having traveled with the corps cross-country and missing the group's first 10 shows, he was able to work his way back onto the performance field the day before Pacific Crest flew back home to California. At first, doctors told Nelson that an MRI revealed a bone fracture, however that turned out to be from an old injury. A hip specialist found a torn muscle leaving him thinking that he might be out for the entire season. Nelson drummed on the sideline during rehearsals and walked alongside the corps as the members went onto the field for competition. He kept icing and stretching out the muscle, checking how long he could march on it and gradually increasing the time that he would push himself. 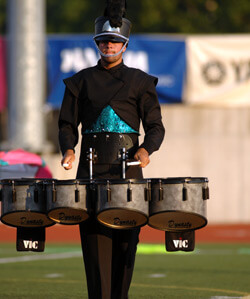 Matt Lackey, tour coordinator for the corps, related that Scott couldn't get out of bed without pain, but that the management and staff had extreme confidence in him. They decided to take him on tour and not fill his spot to give him a chance to recover and work his way back into the show. They didn't know until the day of the Allentown event that he could succeed on the field when he made it through his first performance run-through with the corps and did so without pain. After the Allentown performance, Nelson said that he felt exhilarated to finally be on the competition field, especially since the demand of the show was so high. "I'm really glad that's behind me," said Nelson. "This whole experience taught me what to expect from myself, to have patience and to look into the future to establish goals and to work toward those goals. I feel great. I've missed it so much."