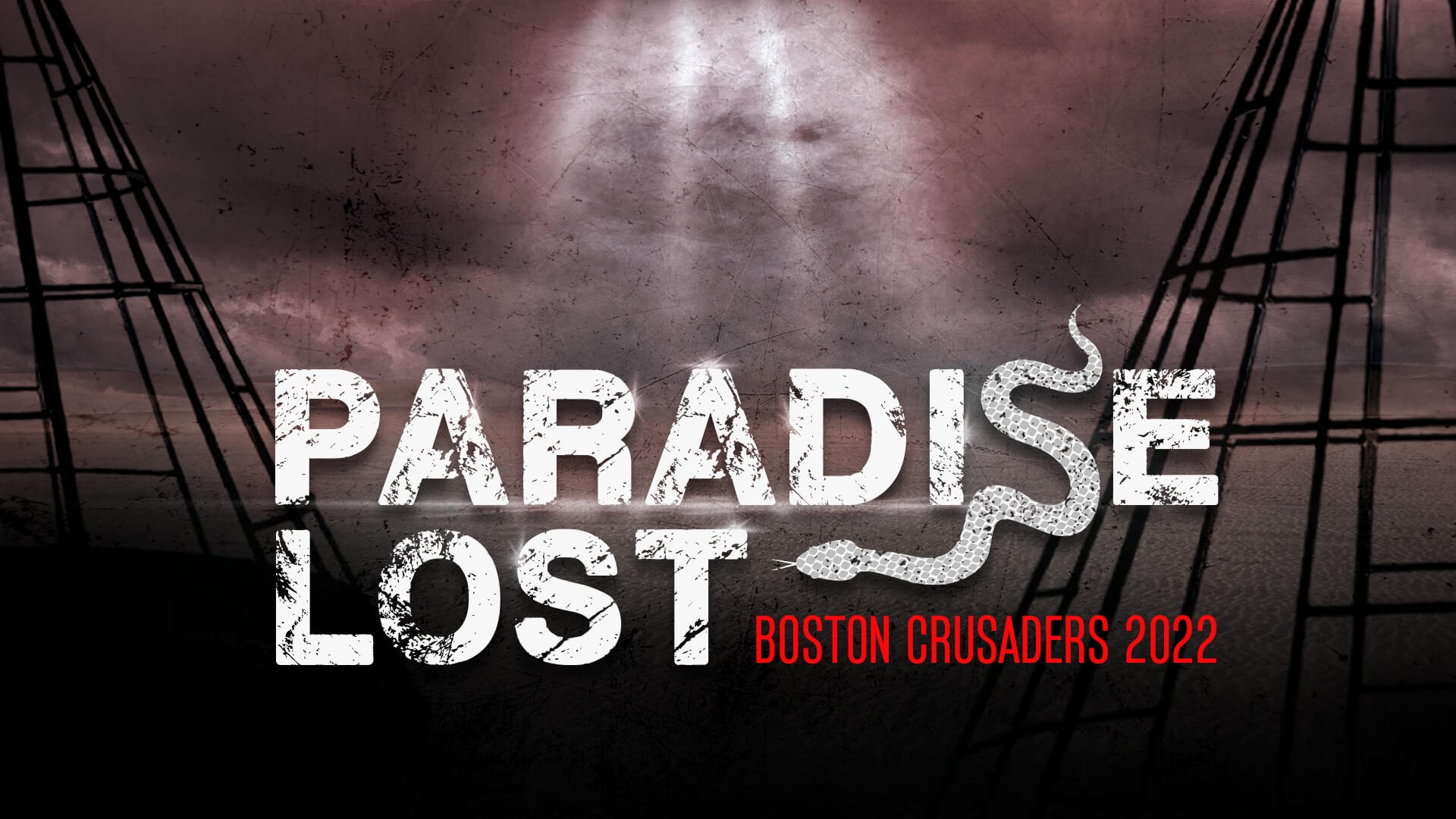 As the 2022 DCI Summer Tour comes into focus, Boston Crusaders dropped exciting details about the corps’ on-field plans for the summer to come.

Just recently moving into their spring training rehearsal site in Castleton, Massachusetts, the Boston corps enters 2022 on the heels of top-six finishes in each of the last three competitive drum corps seasons, as well as 2021’s innovative non-competitive production, “Zoom.”

Here are five key takeaways from Boston Crusaders’ “Giving Day” celebration, during which the corps officially announced its production for 2022:

Boston Crusaders’ 2022 production is titled, “Paradise Lost,” named after the epic poem of the same name written by John Milton in 1667.

The poem — and, presumably, the production — details the experiences of Adam and Eve story, as described in the Bible, their temptation by Satan into consuming forbidden fruit, and their resulting banishment from the paradise they’d inhabited.

The Boston corps is 13 years removed from a show that centered around the story of Adam and Eve; its 2009 production, “The Core of Temptation.”

That being said, it appears as though Boston’s 2022 take on the age-old story will take on a much different tone and approach, given its basis on the Milton poem. None of the corps’ music selections for its 2022 production match those performed in 2009.

Boston Crusaders’ recent setlists of music choices could quite easily be described as “eclectic.” The corps has, in the past few years, been able to pull from a very wide range of source music in creating its productions; 2019’s “Goliath,” for example, featured the likes of “Hamilton,” the “Rocky” movies, and the music of Peter Graham and John Coltraine.

Brass arranger Ryan George, now in his tenth year with Boston Crusaders, spoke highly about the corps’ list of 2022 selections, and particularly, Maslanka.

“In my mind, he’s one of the top-five band composers of all time,” George said.

Maslanka's "A Children's Garden of Dreams," which will serve as Boston Crusaders' opening movement, was also featured in Phantom Regiment's 2018 production, "This New World."

After a string of productions in the late-2010s that artistic director Keith Potter described as carrying the same “epic” style, the corps made a conscious effort to take its program design in a new direction.

According to Potter, while discussing plans for the corps’ next show, the decision was made to approach design first from the perspective of “setting” and “landscape,” rather than characters and events.

“We made a really conscious decision to try to shift the brand,” Potter said. “What does it look like? What does it feel like? What kind of human experience happens in a space that is the center of the story? (These questions) led us to ‘Paradise Lost.’”

George noted that Boston’s music design will take on a slightly new feel as well.

“Since I’ve written for the corps… we’ve never used this many soloists or small ensembles in a show,” he said.

According to its designers, the Boston corps will utilize a brass soloist within the context of its percussion-centric movement.

“They really are in the mix with what the drummers are doing,” George said. “And with the processing of sound, we’re hoping to kind of create this new instrument that hasn’t been heard on the drum corps field before.”

The BACBattery is hitting the ground running this season.

Following their spring training, the Boston Crusaders will officially kick off their season on Thursday, June 28, at the DCI Tour Premiere presented by DeMoulin Bros. & Co. at Ford Field in Detroit. The event is set to be broadcast live in movie theaters across the country.