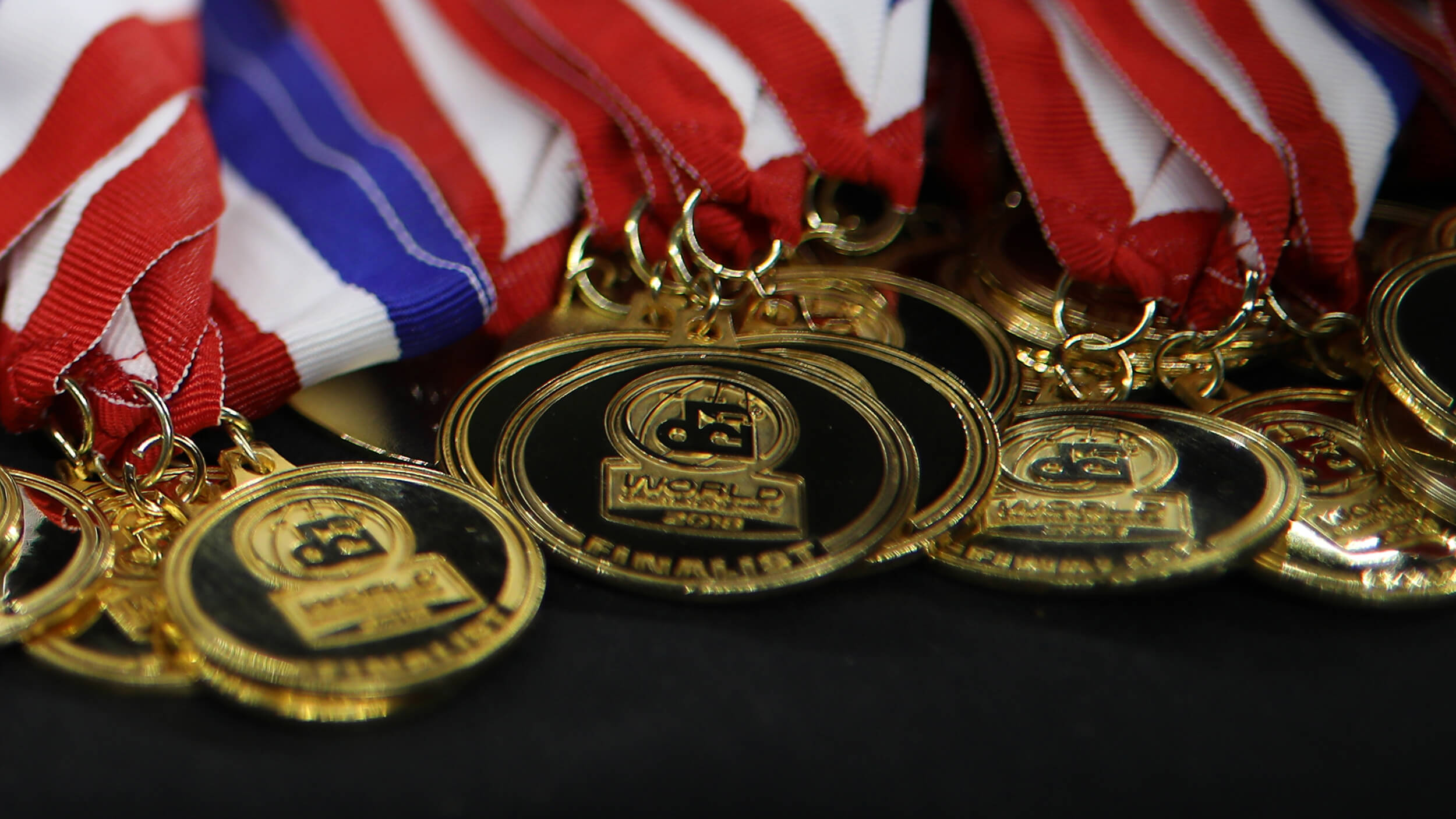 In 2019, Blue Devils and Bluecoats found themselves locked in one of DCI's most historically-compelling races.

But this summer wasn't the only "photo finish." Across 47 years of competition, there have been 16 gold- and silver-medalists separated by half a point or less, not including three ties.

Take a look back at the top 10 closest margins between top-two finishers in DCI history: 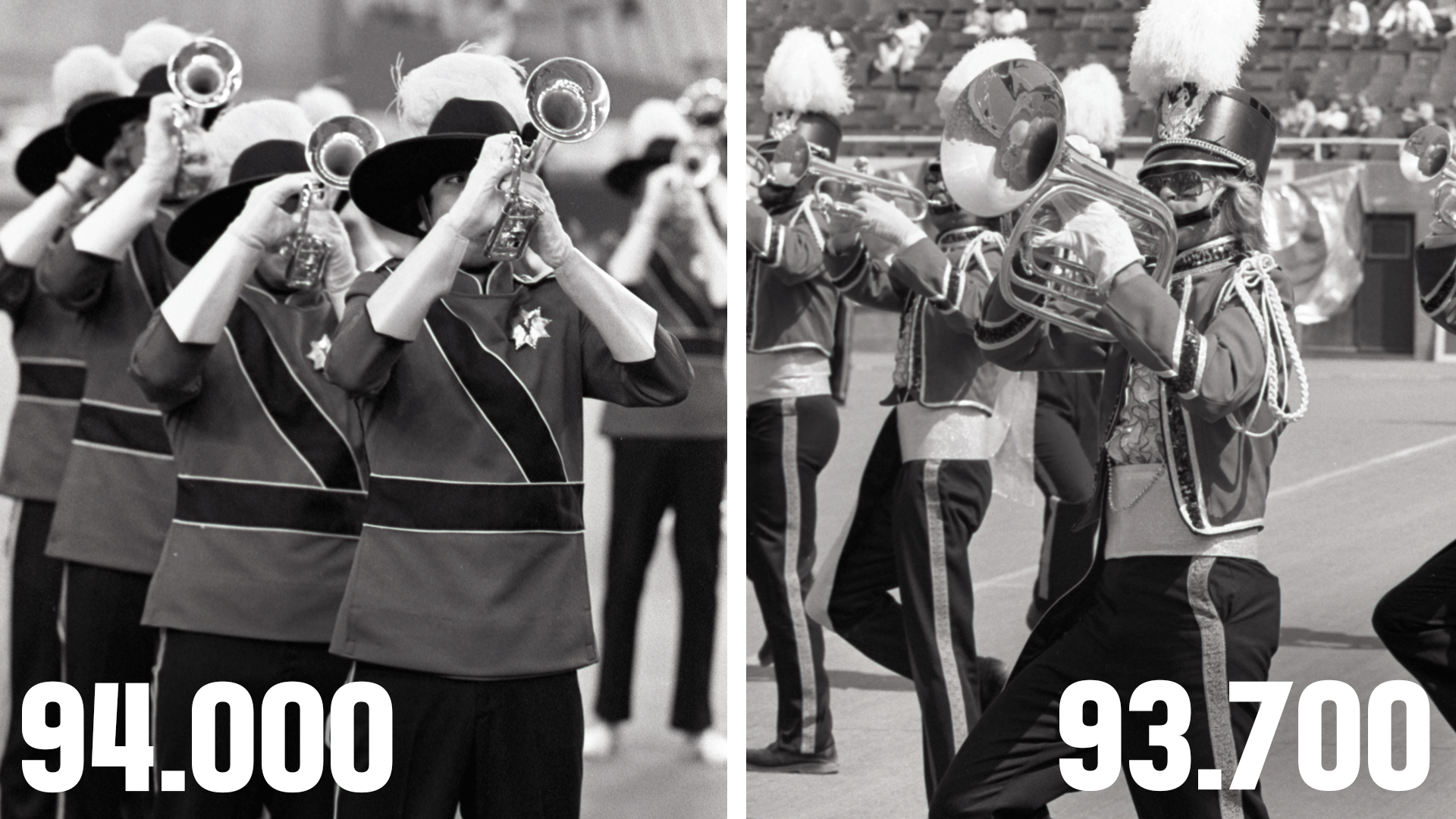 The two Bay Area corps met a dozen times in 1981, and it took until the tail end of the season for any of those meetings to see Santa Clara Vanguard take the lead. The first nine went the way of Blue Devils, with four of the corps' wins coming by more than two points. As late in the season as August 6, Blue Devils owned a lead of 3.2 points. But Vanguard turned on the jets heading into the DCI World Championships in Montreal, ultimately winning the last three meetings, with the very last showdown producing just a three-tenths split. 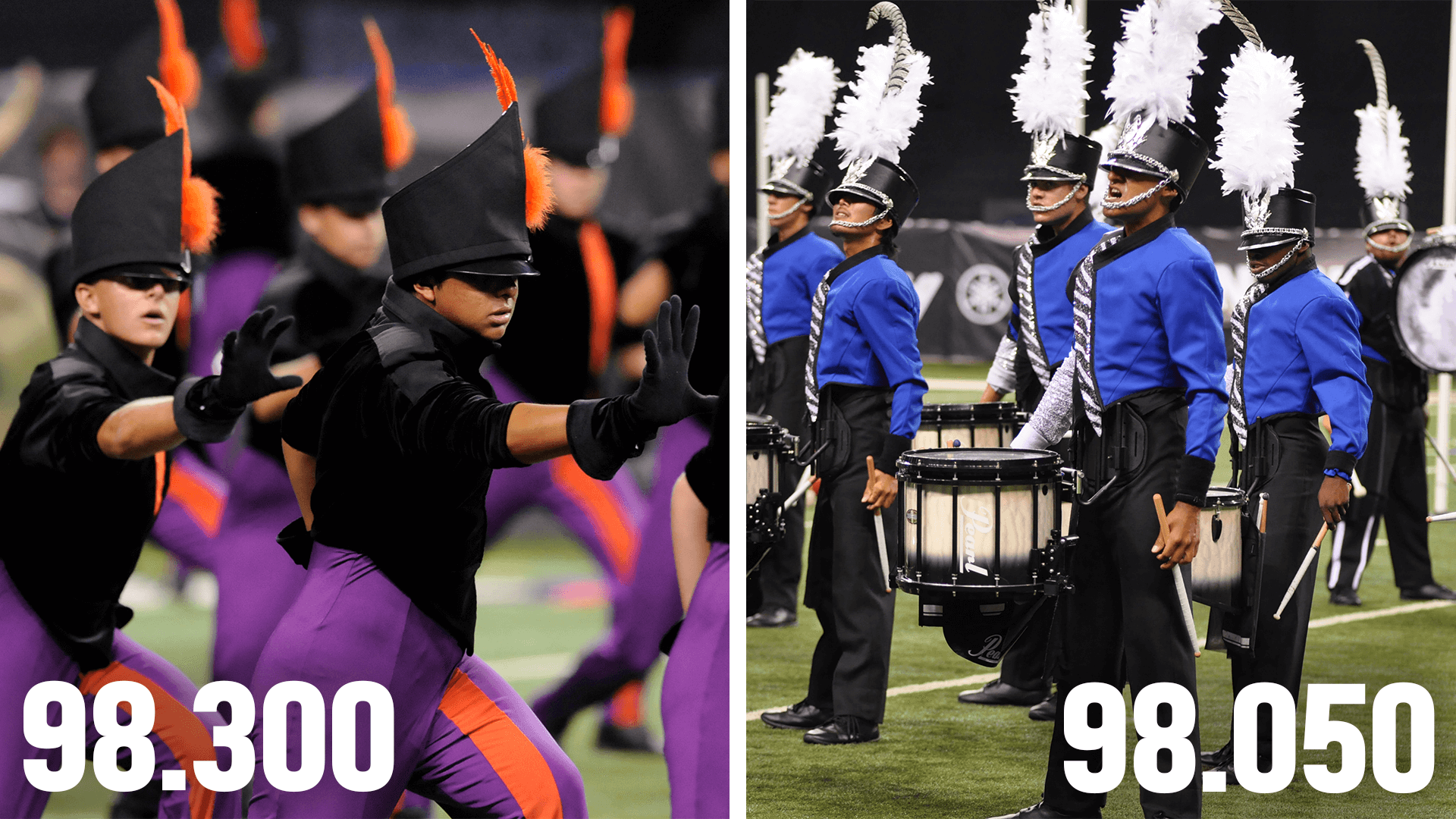 Carolina Crown's decision to start the season out west made 2013's race all the more compelling, as Crown and Blue Devils went head-to-head an astonishing 25 times throughout the season. The South Carolina corps won 14 of those meetings, but 10 of their wins came in the first 12 contests against the Concord corps. Starting with a pair of wins in Texas, Blue Devils went on to win eight of 11 meetings heading into the World Championships — as well as one tie in Buffalo, but ultimately a couple of close wins on the last two nights of the season pushed Crown to its first and only World Class championship trophy. 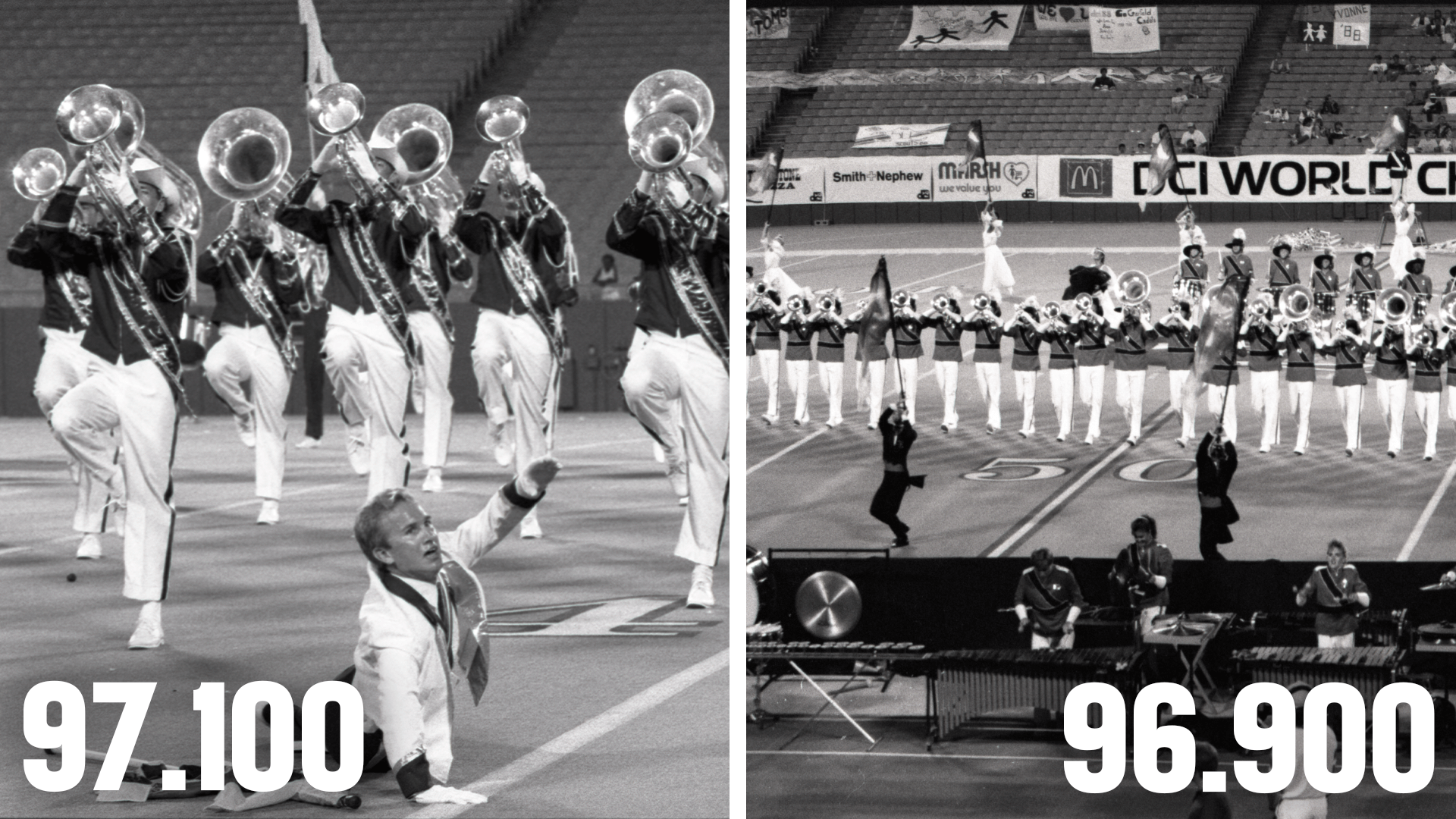 In 1988, Madison Scouts didn't defeat Santa Clara Vanguard in any city other than Kansas City, Missouri, the site of that year's DCI World Championships. Prior to the season-ending showdowns, Vanguard and Madison had met up eight times, with all of those meetings being won by the Northern California corps. Surprisingly enough, all but two of those wins came by more than a point, and one even came by more than three points. But Madison Scouts didn't go down lightly, earning a win in Semifinals by 1.5 points before squeaking out a two-tenths win on the final night of the season. 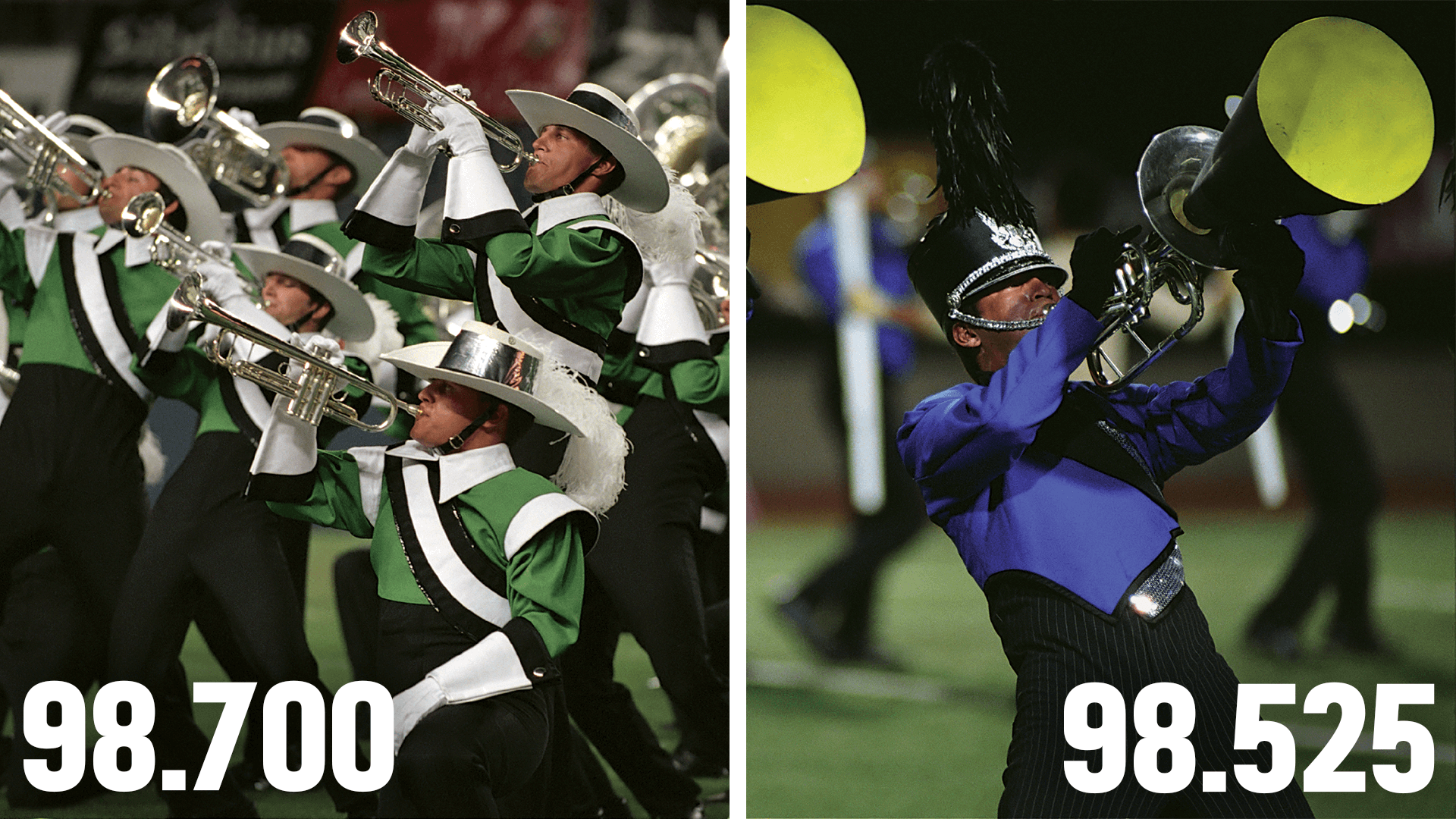 While the Blue Devils' 2004 showing still holds the record for the highest-scoring silver medalist ever, that number fell just shy of giving the Concord corps what would have been its 12th DCI title. Instead, The Cavaliers won their fourth championship in five years, though the Rosemont corps never topped the Blue Devils by more than 0.525 points on its way to that point. The two corps only met five times in 2004, with Blue Devils winning the first two events before the next three went the other direction. In each of those final three victories — all at the DCI World Championships in Denver — The Cavaliers' lead diminished slightly, but was never fully erased. 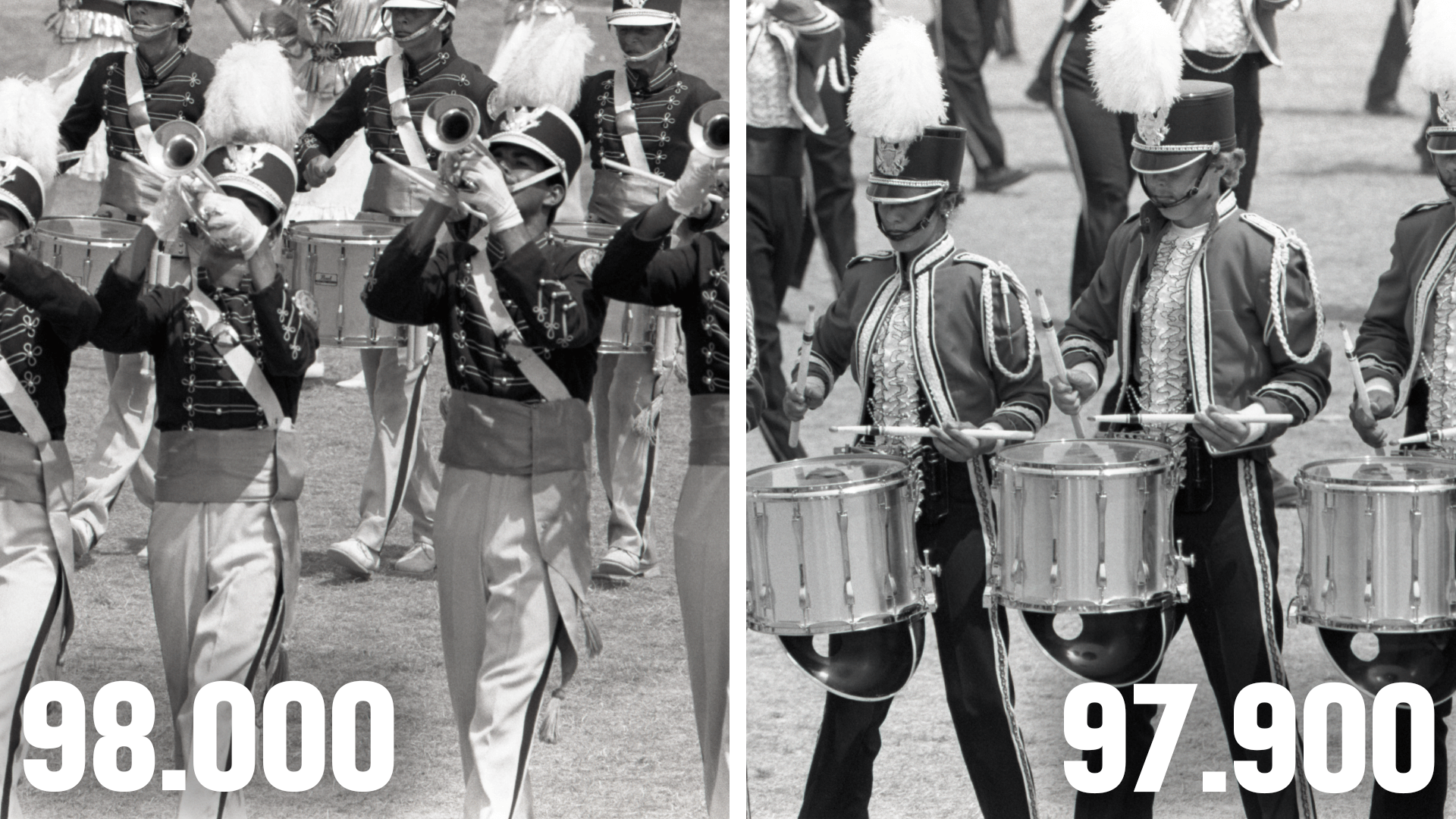 1984 was another close win for the Garfield Cadets, and it stood as the middle year of the corps' three-peat string of championships. The Cadets only lost to that year's silver medalist, Blue Devils, just once in eight meetings, but that lone defeat came right before the tour shifted to Atlanta for the DCI World Championships. The corps, at the time based in New Jersey, held a seven tenths advantage in Semifinals, before its lead was slashed to just a single tenth in Finals. 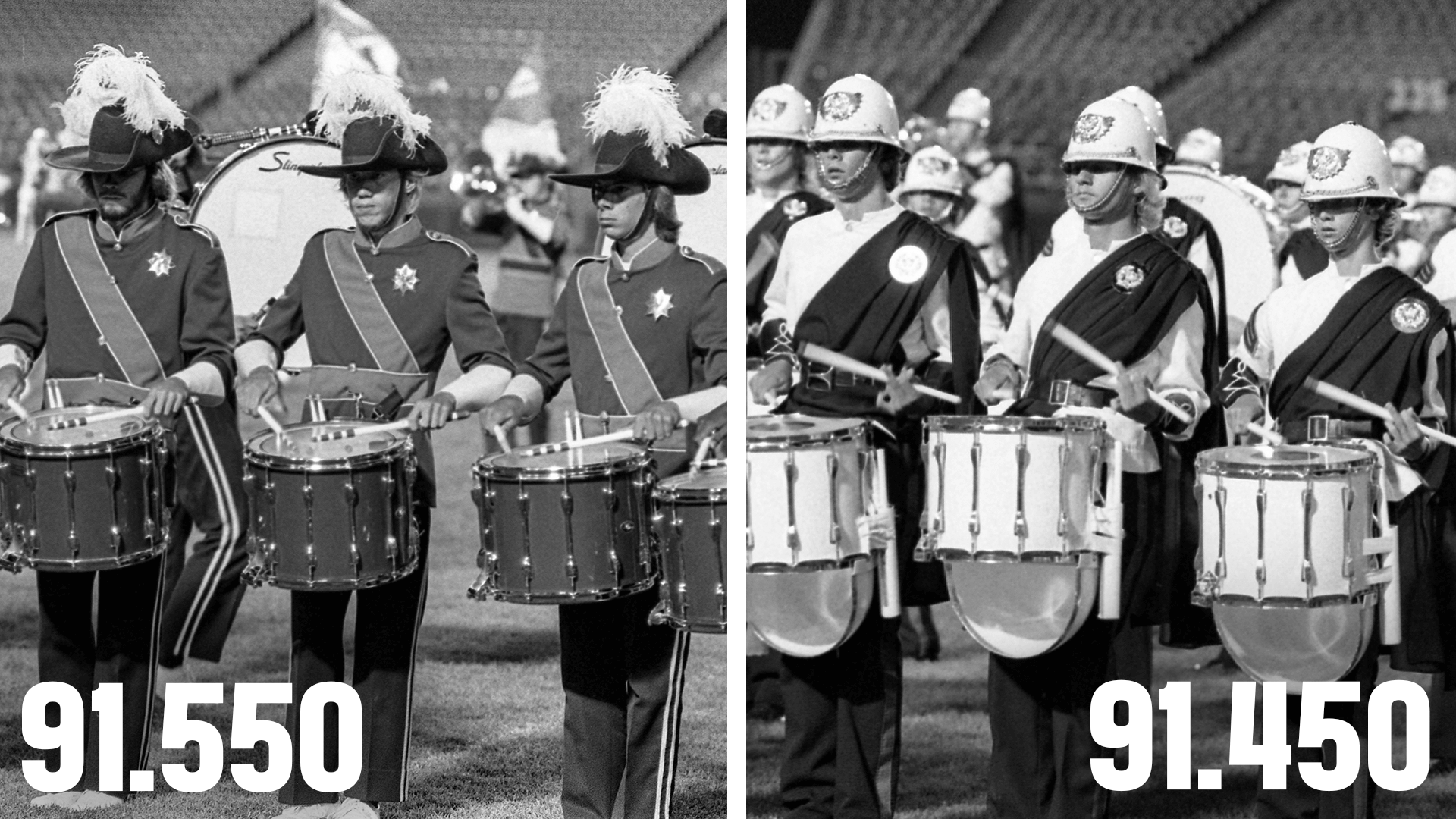 Vanguard and Phantom Regiment met just twice before the DCI World Championships in Denver, with each winning once before tying at the first day of World Championships competition. Vanguard ended up earning its third of now seven titles by just a tenth of a point; neither side defeated the other by more than a point at any meeting across the 1978 season. 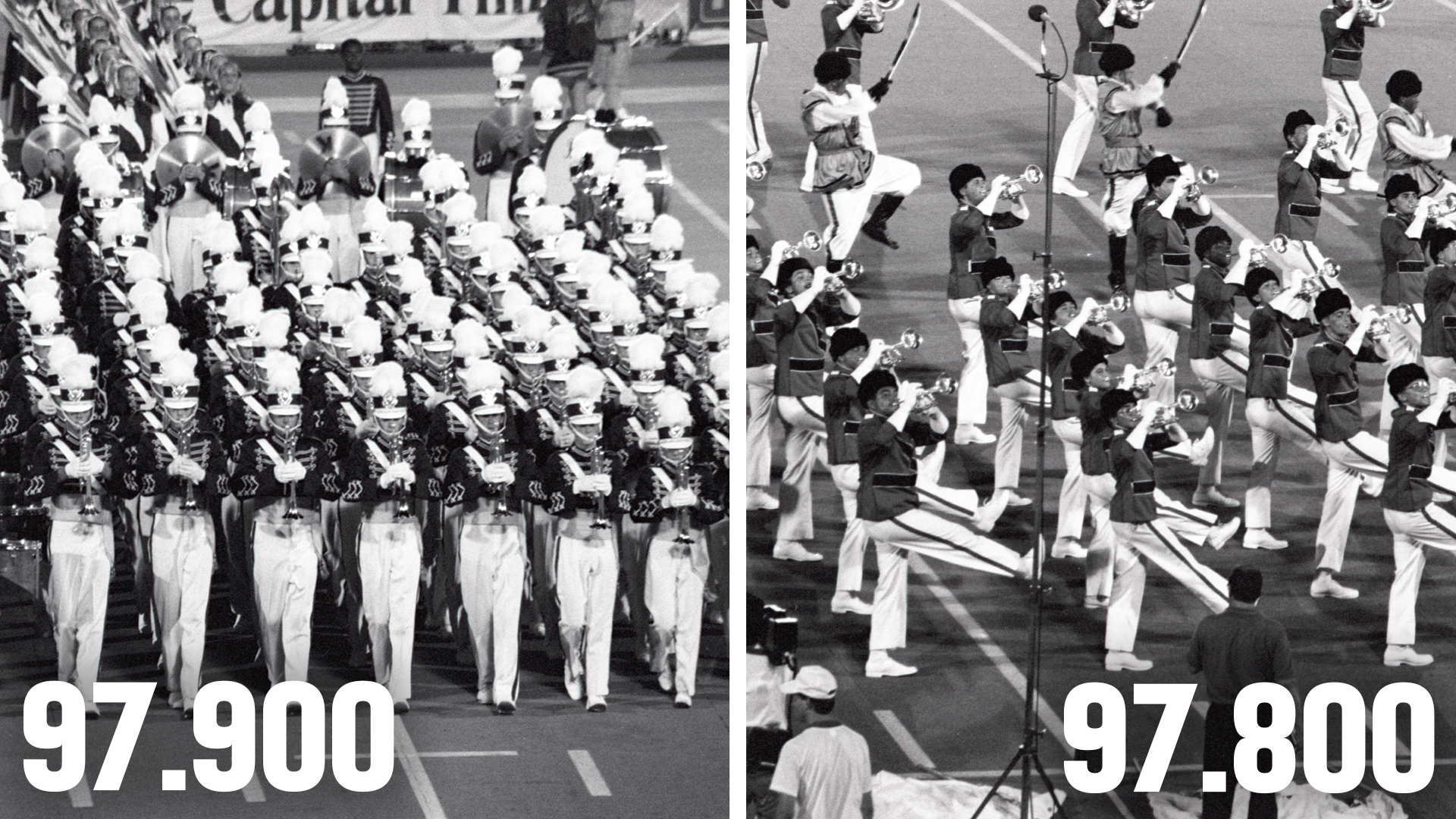 It took until the DCI World Championship Semifinals, held in Madison, Wisconsin, for the Garfield Cadets to finally leapfrog Santa Clara Vanguard, after falling behind the Bay Area corps in five consecutive August meetings leading up to the World Championships. The Cadets only won two out of seven meetings on the season, but they were the last two; the first came by half a point, before the Finals night gap of just one tenth. 1987 marked the corps' fourth title in five years. 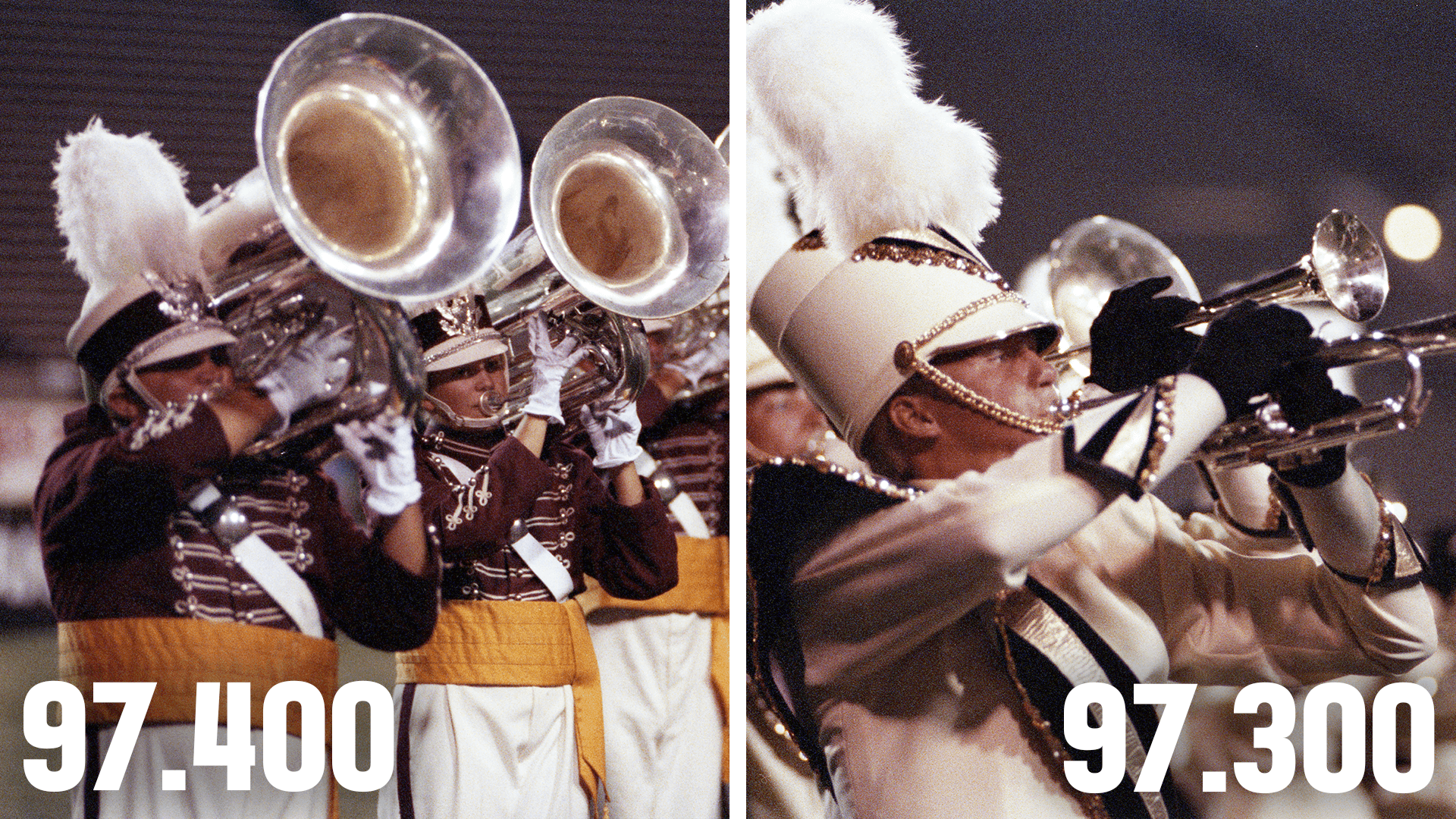 The race in 1993 was back and forth throughout late July and into August. Star of Indiana took three of the first four meetings of the year by relatively solid margins — the lone outlier a July 30 tie — but the Cadets of Bergen County turned things around entering August to defeat Star in four of the corps' last five head-to-head contests. Those last five meetings — the third of which went to Star of Indiana in Quarterfinals — never saw either side win by more than four tenths of a point. 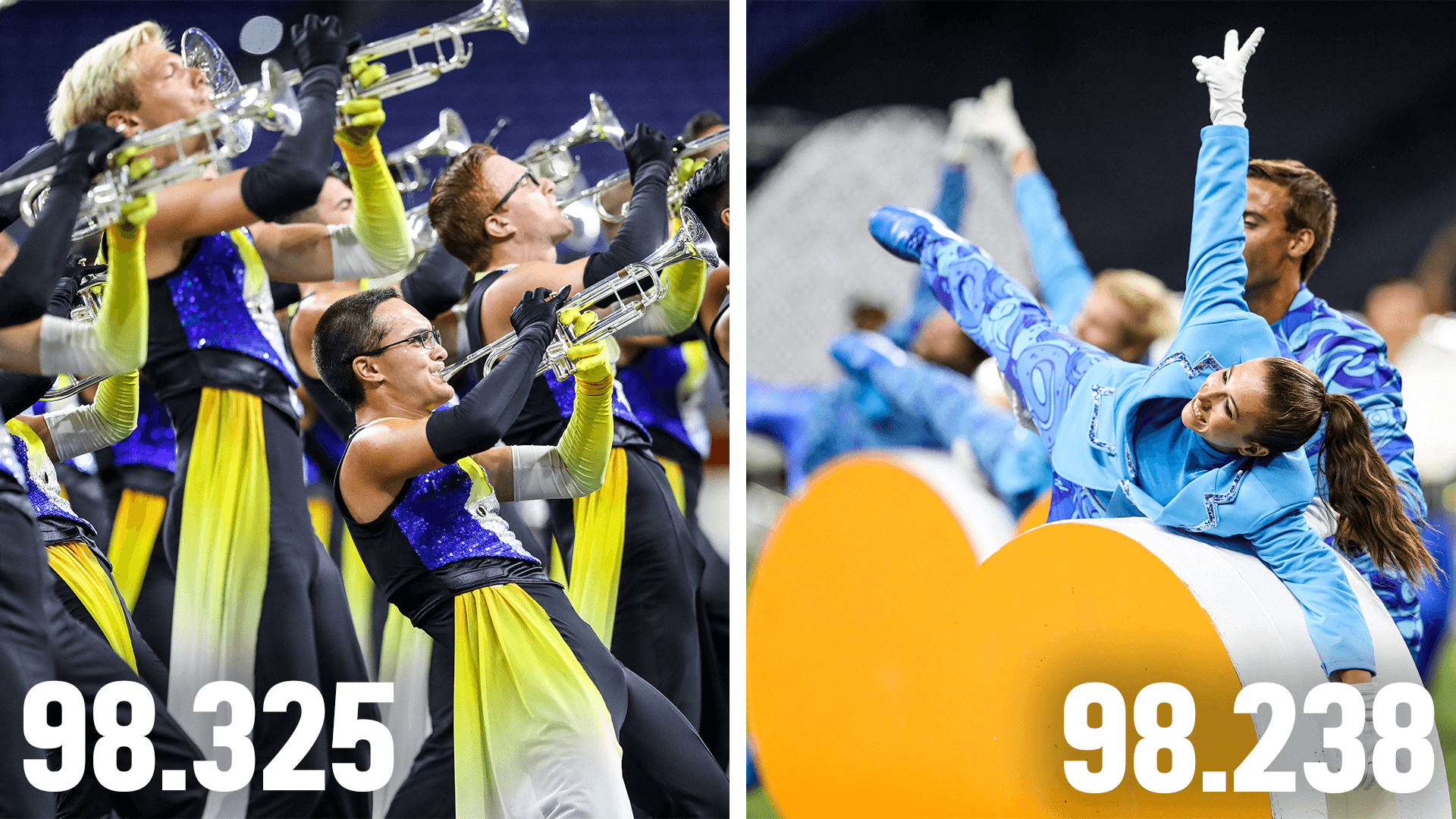 In many statistical senses, 2019's top-two race was one of the most memorable ever, as it saw the two leaders flip back-and-forth on five different occasions in the last two weeks of the season. Bluecoats won seven of the two corps' 12 head-to-head matchups, but aside from the very first meetings — which saw the Canton corps win by 0.650 — neither corps ever beat the other by more than four tenths. Across the three nights of the DCI World Championships, the top two were separated by an average of just 0.112. 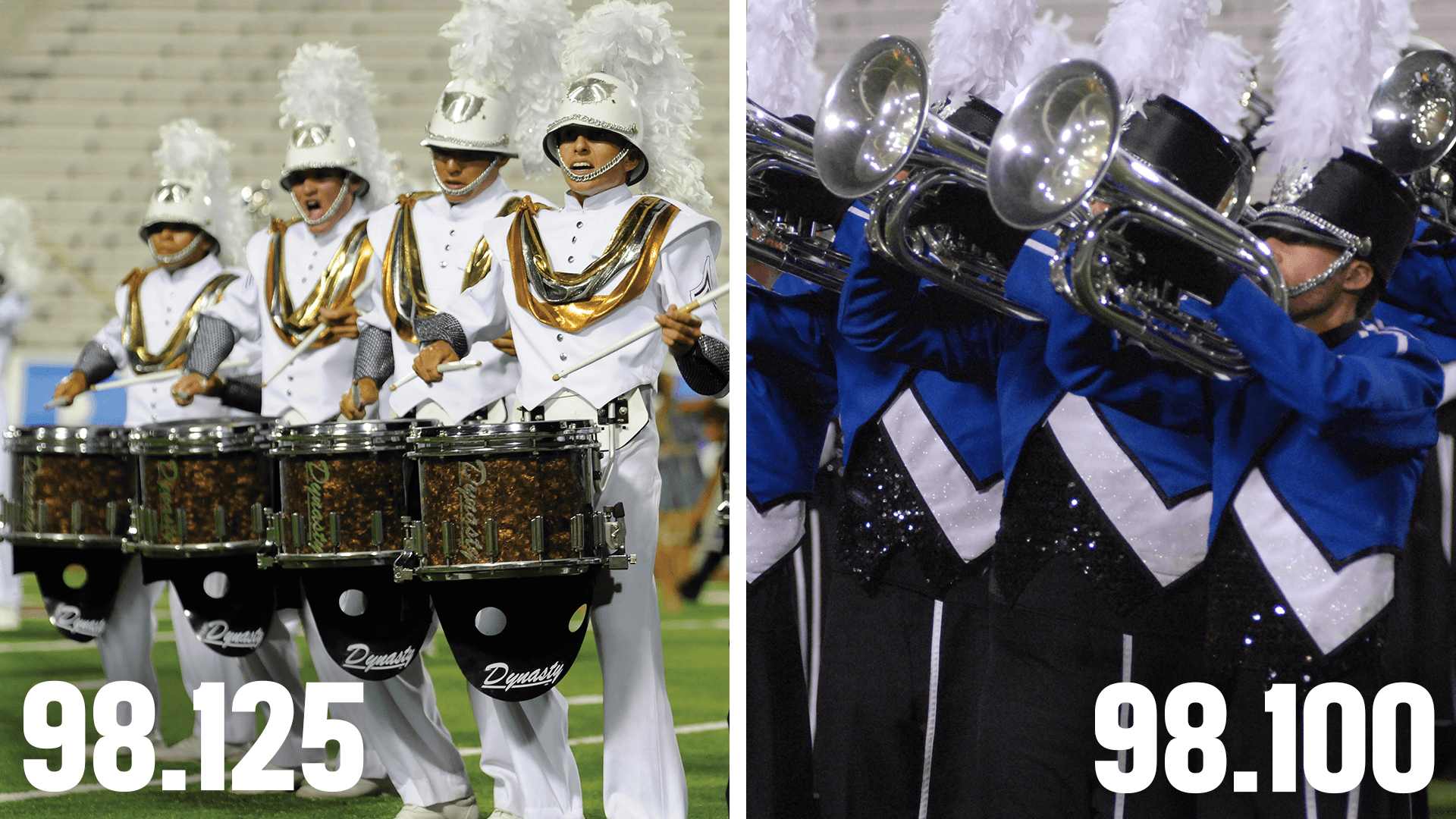 2008's race has historically been known as one of the most exciting, as Phantom Regiment — with its popular "Spartacus" production — stunned the Blue Devils at season's end by just a quarter of a tenth of a point. Interestingly enough, Finals night was Regiment's only head-to-head win against the Concord corps all season; Blue Devils had defeated the Rockford corps in 16 conseuctive meetings, by an average of 1.68 points. In fact, Phantom Regiment never scored within a point of the Blue Devils in 2008 until the World Championship Quarterfinals.