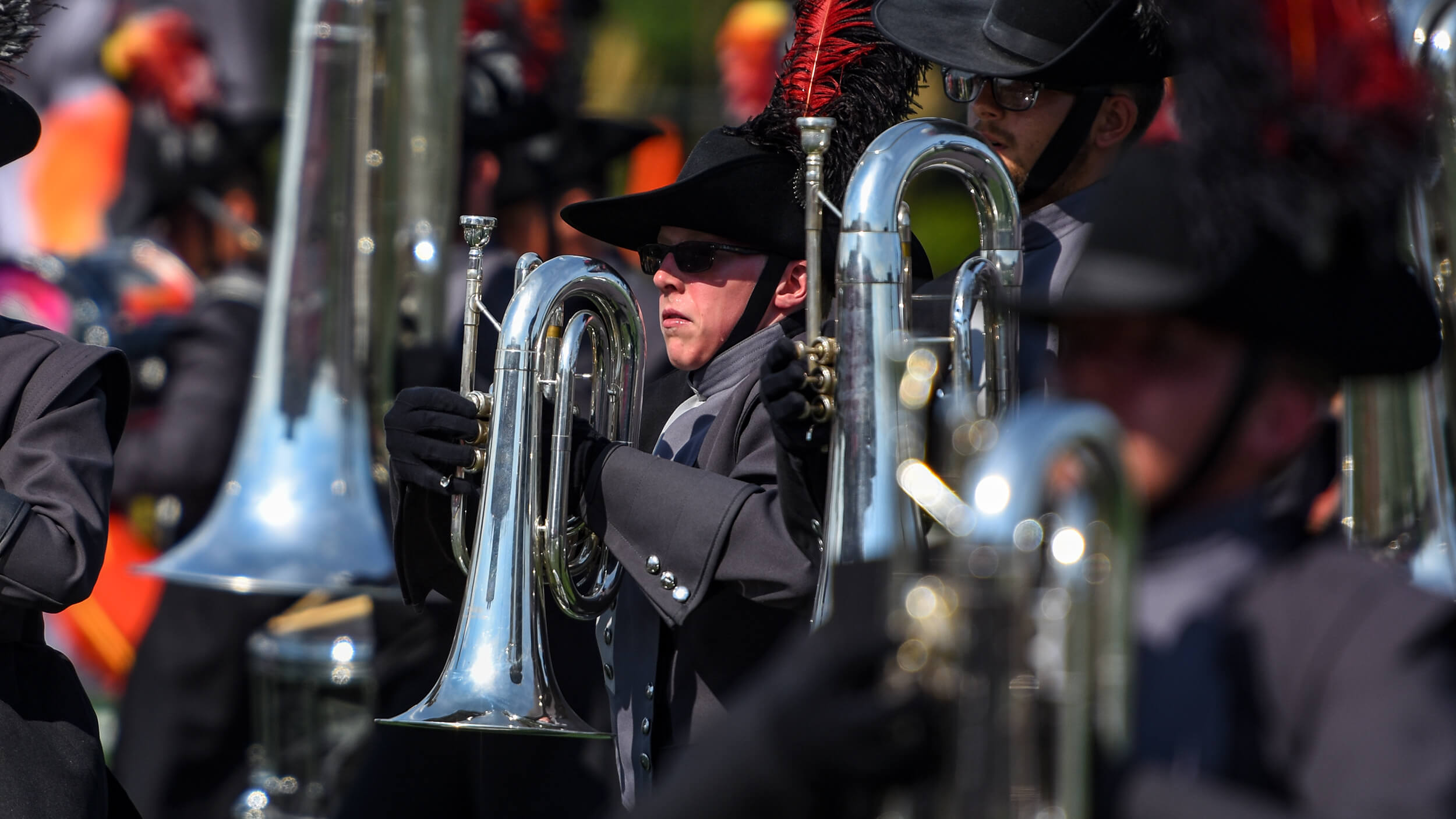 It’s a different kind of audience, the one you experience as part of the annual DCI World Champions’ encore.

Most times, it’s after midnight by the time the gold medalists have the field cleared for one final performance. That doesn’t matter. No one in that crowd is lacking even a sliver of energy.

Every impact moment lights the stands on fire. Standing ovations happen every couple of minutes. Everyone in the crowd knows what’s coming, they’ve been waiting for it all night, and they know full well it’ll be their last taste of DCI for the next ten months.

And they show it.

Really, it can only be described as one of the season’s pinnacle moments. It always is.

The final moments of “Babylon” – a true, season-long crowd favorite with the competitive prowess to back it up – were no exception, as the newly-crowned World Champion Santa Clara Vanguard brought the 2018 season to an explosive finish.

And Payton Pugliese experienced the whole thing, quite literally through the eyes of age-out mellophone player Sean Suarez.

Like any teenage drum corps fan, Pugliese was watching a YouTube video after the conclusion of the 2018 season; this one in particular was one of many “head cam” videos, depicting Vanguard’s encore performance directly from Suarez’s point of view.

Suarez wasn’t just a mellophone player, though. You had to look closely during the video to notice the difference, but Suarez has just three fingers on his right hand — his “playing hand,” if you will, as a member of the brass section.

Suarez, despite a clear physical challenge, experienced the ultimate height of the drum corps activity — performing an all-time iconic production, at Lucas Oil Stadium, with a gold medal around his neck and an avalanche of adoring cheers raining down from the royal blue seats in front of him.

Pugliese knew it even then, his drum corps dreams were fully attainable. Inspired by Suarez’s example, he knew his own cerebral palsy, while certainly presenting an apparent road-block, was nothing he couldn’t overcome as a performer.

‘Well, this guy with three fingers is clearly doing really well with this.” 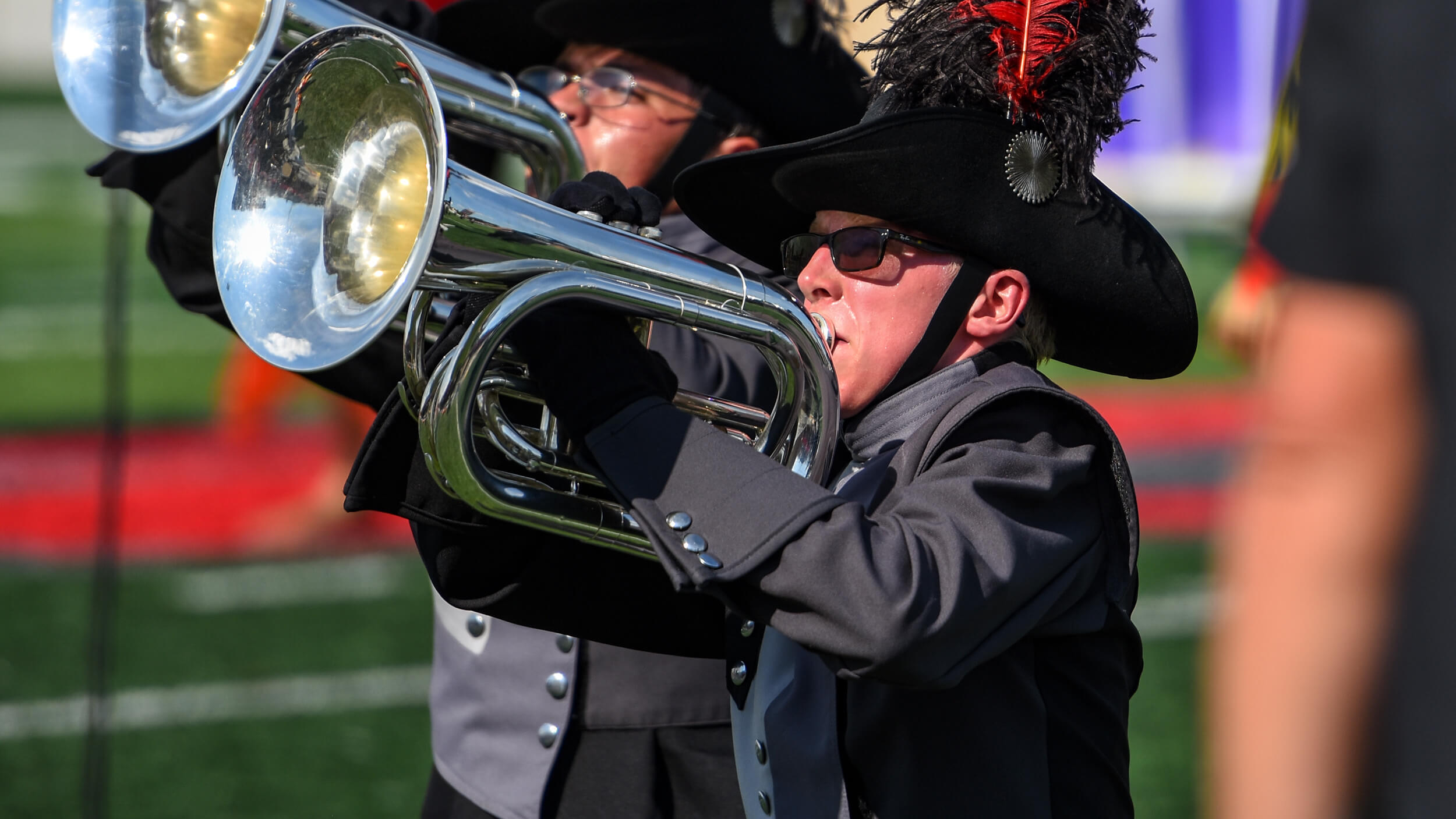 Payton had seen plenty of drum corps in his time, as a regular attendee at the DCI World Championships. He had friends in the activity, too, mostly members of Shadow, an Open Class corps based out of Oregon, Wisconsin.

In particular, he was classmates with the corps’ 2018 drum major Emily Gray.

Payton had his inspiration, and he had his connection. Finally, he took the leap.

“My high school marching band goes to the DCI Finals after our band camp every year,” Payton said. “2017 was my first year going, and I loved seeing all of the stuff they were doing, the quality of the music, and how everything worked; I knew then that I wanted to be a part of that.”

“(Gray) went to my school and then went on to Shadow, and she told us how great it was,” he added. “I figured that it would be a pretty good place to start.”

From the beginning, there were concerns — or, more accurately, question marks — as to how Payton would handle the drum corps season.

The Wisconsin corps had a schedule of all-day spring training rehearsals, before embarking on a two-week, eight-show tour through the midwest.

And it’s summer. It’s humid. It’s long days of athletic and musical challenges. Drum corps is never easy, no matter how you slice it, and Payton and his staff knew full well that would be the case.

“He came to us with a bigger challenge than most kids do,” Shadow director Rebecca Compton-Allen said. “At first, we were concerned that he might get hurt, or that he could potentially hurt others on the field in some of the faster-moving drill, or something like that.”

Those concerns — all valid, entering an uncharted endeavor for all involved — quickly evaporated before the staff’s eyes.

“But we were wrong,” she added. “He was fully capable of doing everything everyone else was.” 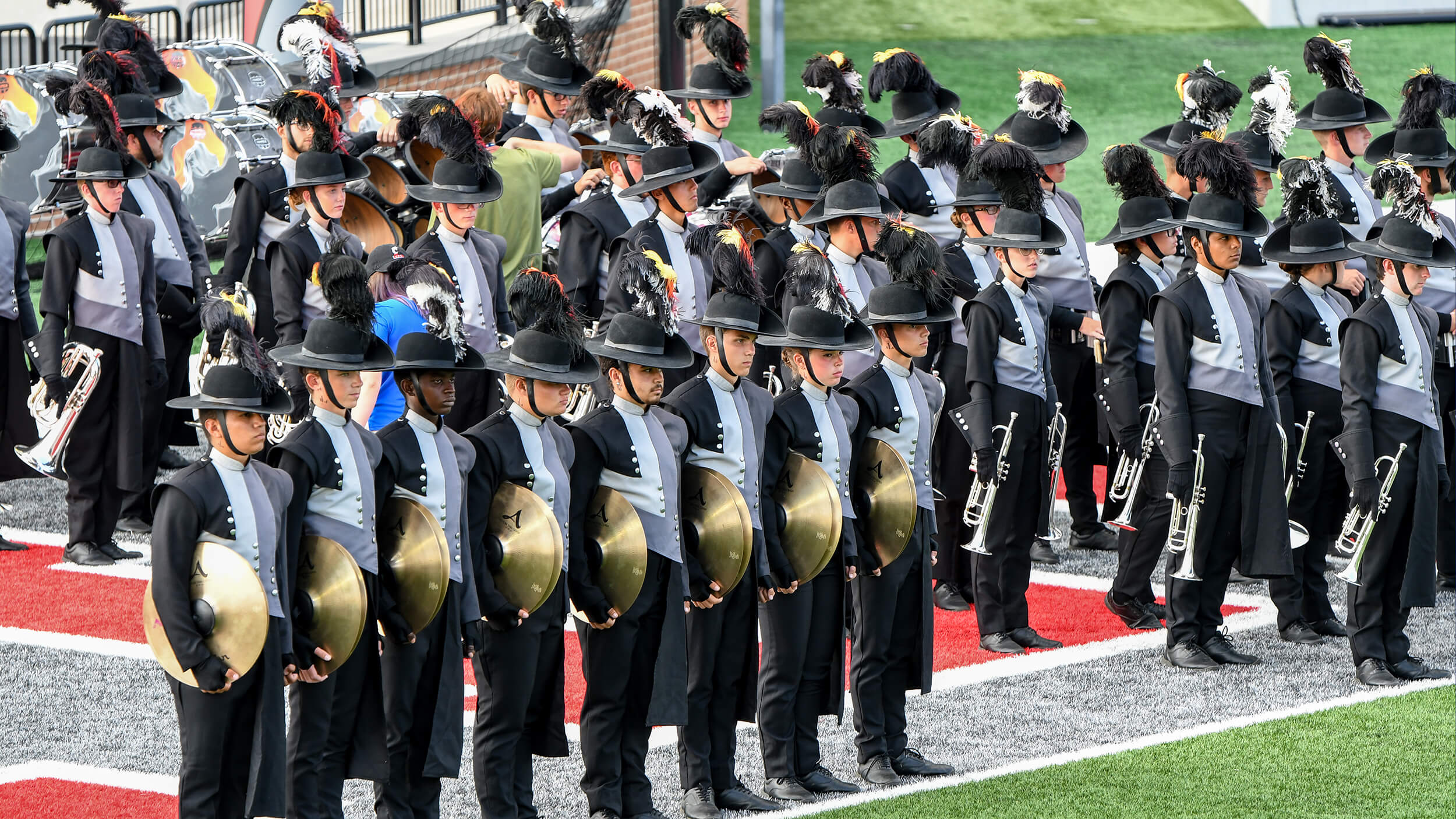 Members of Shadow prepare to perform at the DCI Open Class World Championships in Marion, Ind.

Payton wasn’t scared away by the physical difficulties of the activity. In fact, he actually noted that some of the most trying parts of the summer had to do with the mental capacity it takes to complete a full drum corps season.

“Obviously, it’s physically challenging, but I didn’t realize how much it can affect you being away from home, so there was that,” he said. “That was probably the most surprising part."

Even then, though, no problem. With the right attitude, what’s really standing in your way?

“You can do more than you think you can do,” Payton said. “I honestly went into this not knowing how much I would be able to do, but seeing other people doing the same stuff I was and seeing how everyone else was pushing through everything, it gave me this drive to almost prove that I was going to be able to do it, and it turned out that I was doing it.”

When all was said and done, Payton’s rookie season ended up being abundantly positive. As he put it when trying to pick out one favorite part of the experience, “There’s a lot of good parts about drum corps.”

But nothing stood out more than the friendships.

“It seems kind of weird at first, you’re surrounded by the same people for two months, at least, so it seems like it would be bad,” he said. “But honestly, everyone here has been absolutely amazing, so that’s definitely the best part.”

In the eyes of his director, though, that impact went both ways. The positive effects Payton felt from his fellow Shadow members, he reflected right back to the masses.

“He has a smile on his face every day,” Compton-Allen said. “He’s out there working harder than most of the kids on the field at all times. He is a truly inspirational person, and I’m so glad that DCI is something that’s inspirational to him.

“It’s always special for a corps to have someone to really root for and rally behind, and I think Payton is that person for Shadow Drum and Bugle Corps.”

And at the end of the day, all it took was a little bit of inspiration and the right mindset to conquer doubts and challenges, and ultimately live a dream.

All it really took was that one question.

The answer? You can.

“You’re stronger than you think you are,” Pugliese said. “And despite the fact that there will be challenges in your way, it’s always worth it to go out, because it will change you 100 percent for the better.”