This picture came from Eric Wheeler, a 2006 member of Southwind. 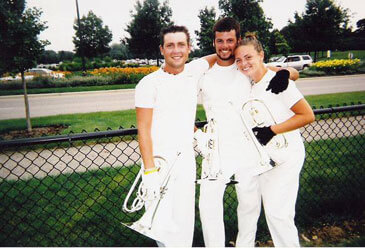 Three of us mellophone players had a disposable camera that we took to most of our shows beginning in mid-season. Before each show, Evan would put the camera in his uniform pocket and we would have someone snap a photo of us sometime during our pre-show warm-up. I can't remember where we were here, but I love this picture. Marie and I both were marching in our fourth season together at Southwind and Evan was marching in his fifth. I was the only one who aged out, though.