Read part 1 of "Eighty-three" Read part 2 of "Eighty-three" Read part 3 of "Eighty-three" Read part 4 of "Eighty-three" Read part 5 of "Eighty-three" The talented staff of the 1983 Garfield Cadets likewise had a talented group of kids to work with. The corps' returning members adapted to the leadership of new director George Hopkins, who quickly changed the corps' mentality. Brian Wilkie Sr.: For any of us "old-time" drum corps folks, 1983 was a jolting wake-up call. The management of the corps, particularly George Hopkins, set out to change the approach we all took toward the competition element of the activity. Up to that point in history, the corps, like every other, took the "win-at-all-cost" view of things. George turned that completely upside down. And some 20 years later, I estimate I have heard his words 1,000 times now from countless directors and instructors (including myself) when walking behind or around any band or corps -- "Focus on what YOU can control, not someone else. Strive to do your best. Be your OWN judge. Do not allow someone else to determine if you are successful." George Hopkins: I was a new director -- I had no idea what I was doing. So, I think it led to the entire corps feeling new. Patrick Zampetti: I just think that the expectations were high and that sub-par performance was not going to be acceptable. This too, applied to the entire organization. Requiring more of the members than of ourselves would not have worked in the long run. Like the instructional team, the list of marching members of the 1983 Cadets now reads like a "Who's who" of contemporary drum corps. Johnny Sanchez: I had the privilege of marching with some incredible people in my years at Garfield. Some of the people you may be familiar with are Michael Klesh, who moved up from bass drum to drum major in 1983. He did a great job as the conductor and really showed where he was heading. Tommy Aungst was in the snare line. He was as passionate then as he is now. Tommy and Michael were from Pennsylvania and we used to play basketball games with the Louisiana boys versus the Pennsylvania boys. They were some pretty heated matches. April Gilligan was in the guard. She has always been a great person and I am glad to have known her as a corpsmate. It showed me what a truly special person she is. Barbara Moroney was a part of that corps as well. "Babs" was always a lot of fun and a great player. The baritone line was filled with great friends. There were two guys I had marched with since my first year in corps, Paul Perniciaro and Troy Naquin. Warren Corman was the consummate Cadet. He had marched in the corps since 1977 and epitomized what a Cadet should be. Eric Sabach, Rich Armstrong, Mark Bishop all marched in that baritone line as well. Back then, the horn line was separated into side one/side two choirs. The first five baritones on my side had over 50 years of marching experience. I had the least at eight years, imagine that. There were about 15 people from the New Orleans area in the corps that year. We had marched a lot of places together. It was very special to age out with that much family around. 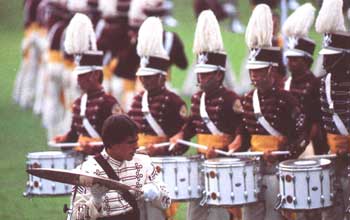 The Garfield Cadets. Photo taken from the 1983 program book.
Eric Sabach: I wish I could drop names here, but we were a family. Even people that you didn't care for, there was some redeeming quality that you were comfortable with, like that annoying cousin. I can't think of one fight or argument that whole summer. We really stuck together and had fun on and off the field. We even all got sick together when a virus ran through the corps in late July. Armed with many returning members, the Garfield Cadets progressed through winter rehearsals, some members knowing that they were on to something big, others knowing that they simply had assembled an extremely talented group of members. Al Chez: The brass line was more refined than the previous seasons. 1982 had some monster players -- including the best lead soprano line I ever heard. The soprano line and baritones had a season-long contest to see who could be the better section. George Hopkins: The percussion line struggled. I had been the percussion caption head in 1982, so when Hannum came in there was much to repair. They were a good bunch, but they were not clean -- not yet. The brass was fabulous. Don Van Doren and Jim (Prime) finished strong in 1982 and they picked up where they left off. The guard was as clean as they come. Peggy Twiggs and her team did a great job. Patrick Zampetti: One of Thom Hannum's greatest contributions to marching percussion was his ability to compose with restraint. In this way, the individual voices could be heard as well as their relationship to the pit and brass charts. This also placed additional performance demands on the members but, in my opinion, makes for a more musical percussion section. Thom's arrangement for "Sanctus" is one of my favorite percussion charts because of this.


Here's a video clip of the infamous "Z-pull" from the 1983 Garfield Cadets' drill. To see this video and future videos on DCI.org you will need to install Flash Player 7.0 onto your computer. If you are having problems with this video feed download Flash player 7.0

I took every chance I could to listen to the brass ensemble put together by Jim Prime and Donnie VanDoren. They had a unique tone and played so in tune, Jimmer would not have had it any other way. Jim Prime: The corps had a strong winter. The staff had become quite adept at handling the demands of recovering from some lean winters of recruitment and attendance from the previous years. Others were concerned with more Earthly issues as the winter progressed. George Hopkins: We struggled though the winter, like we always did, searching for kids, facilities and money! This was my first winter as director. I think the word survival was in my mind. Cooking, trucks, fund-raising -- the world was different for me. Armed with the magical drill design of George Zingali, and the groundbreaking arrangements of Thom Hannum and Jim Prime, the corps took to learning what would become a revolutionary show. George Hopkins I think, like most kids, they took what they were given. I would argue that they had no idea we were breaking new ground. We drummed, we played and -- we did move a lot. That is one thing piece of the puzzle that was clear. This was a visual corps and we did move with great speed and intricacy. Pass-throughs, etc., were new to all of us but the members worked hard. The staff worked hard. We did all we could with little support. It was the way of the East Coast drum corps in the day. Patrick Zampetti: There was such trust and respect for Jimmer, Zingy and Thom that the kids went right along with the plan. Even though we had our moments to "rock the stadium," as bass instructor Steve Kiefer used to say, this was not a satisfying show for those expecting "park and bark" and a huge percussion "throw-down." Johnny Sanchez: We loved the show and performing it was a thrill. Patrick Zampetti: Any time we were able to put multiple sections of the corps together for ensemble sessions, even if it was just the pit and battery, we could see the commitment to musical effect was working. Eric Sabach: (It was clear we were onto something revolutionary) The first time we did the infamous "Z-pull" in a rehearsal in the armory in the Bronx. The indoor field wasn't big enough, so we literally had to march around howitzers to make it work. The staff was the first to ever "throw babies" for that move. Up to that point in my marching career, I had never been around something that I knew would be so special, so early in the winter. On Monday, we'll revisit the Garfield Cadets' summer season of 1983. Purchase the 1983 "Legacy Collection" DVD, which includes the entire Garfield Cadets' 1983 performance. Cast of Characters: Greg Cesario – Cadets' dance choreographer in 1983; still a drill designer Michael Cesario – Cadets' program coordinator in 1983; now a uniform designer and college professor Al Chez – Cadets' brass technician in 1983; now trumpeter on "The Late Show with David Letterman" George Hopkins – director of the Cadets in 1983; still that corps' director Mike Moxley – Blue Devils' designer and instructor in 1983; would become Blue Devils' executive director in 1984; now a stockbroker in San Francisco Jim Prime – Brass arranger for 1983 Cadets; still a drum corps brass arranger Eric Sabach -- Garfield Cadet baritone player, 1981-1984; currently a DCI judge. Johnny Sanchez – Garfield Cadet baritone player in 1983; currently Phantom Regiment's drill designer Marc Sylvester – Cadets instructor in 1983; will design the Cadets' 2004 show Brian Wilkie, Sr. – Garfield Cadets' lead soprano player in 1983; now assistant band director at Southern Regional High School in New Jersey Patrick Zampetti – Cadets snare tech in 1983; founded Studio Z architecture firm in Richmond, Va. George Zingali – Cadets drill designer in 1983; died in 1992