Read part 1 of "Eighty-three" Read part 2 of "Eighty-three" Read part 3 of "Eighty-three" Read part 4 of "Eighty-three" Read part 5 of "Eighty-three" After countless hours of winter practice in late 1982 and early 1983, the Cadets began a surprise run at the DCI trophy in 1983 almost as soon as the season started. Corps director George Hopkins had a simple axiom for the corps rehearsals as the season began: "Work hard!
Get it right." Eric Sabach: As marching members, we wanted to be different. Doing anything, playing anything, or even how we approached rehearsing, we wanted to do it better than anything before and with more dedication. I'd hate to say that we were a machine, because we were not. We were something more -- a tremendous synergy was taking place between all the staff, the members, the support crew, and the show. It was amazing and very special. It seemed like each rehearsal brought a greater expectation of what we needed to be and what we could become. We wanted to be cleaner, faster, louder, softer, subtle and genuine. I think the staff also knew that they had a corps of members that would never say, "We can't do ..." or "We're tired." We wanted more and they knew it. Michael Jones: We practiced so much that spring leading to the season. The "Mass" was a mass mess going into the first show. We just did what we were told because, yes, we knew there was something. Patrick Zampetti: The overriding concern was maximizing musical effect and raising the level of performance. We knew the show could win, but not without a lot of hard work. Jim Prime: The show performance situation entering the 1983 season had an optimistic slant. The corps was on top of its game at the start of the season. Withstanding some inevitable bumps in the road, the momentum generally continued through the early season, the big checkpoint show at Whitewater DCI Midwest, and into the closing few weeks. 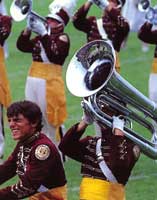