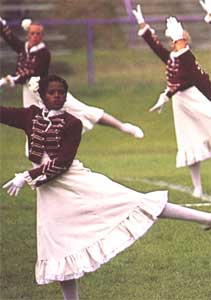 The Garfield Cadets. Taken from the 1983 DCI program book.
Johnny Sanchez: We knew we were on to something special back in 1982. There was a buzz about that show and we really began to change the activity during that season. The 1983 show was the maturation of that idea. The following years (1984, 1985) would far surpass what we accomplished in 1983, but that season really turned the activity on its ear. ^Al Chez: In 1983 the return members had a better feel for Zinagli's drill, and confidence in the entire staff. There was a much different feeling starting the 1983 season. (We had) lots of returnees from 1982; A better feel of George Zingali's and Mark Sylvester's style, and a confidence of knowing what it takes. George Hopkins: 1983 was when we stepped off the ledge. We were young -- Michael Cesario and Jim Prime drove a good deal of the thought process. Zingali, Jimmer (Jim Prime) Cesario -- they made the calls; the rest of us hung on for dear life. Eric Sabach: Zingali, Prime and Michael Cesario were the creative genius behind those shows. (Zingali and Prime) were roommates that lived across the hall from each other and when George had an idea, he would wake Jimmer up in the middle of the night to make sure the horns were in the right place. Cesario would always tell George, "I've seen that before, can't we do anything different than that?" full well knowing that he had just seen something great on paper, but wanted George to exhaust his genius, his art, his soul, into the program. Everybody pushed everybody that summer. I was lucky enough to be around that house helping George and Marc Sylvester chart that show, while I was still marching. I learned so much about the craft that way. So many Cadet age-outs have gone on to other corps as technicians, designers and even directors. Jim Prime: The possibility of programming a piece like "Rocky Point Holiday" really seemed to excite Cesario and Hopkins. Zingali's first outward reaction was that it was "too crazy" to do something with that degree of complexity and tempo. Perhaps this reaction actually convinced us that we could be on to something. I think Michael Cesario sensed that here we had something that even "outcrazied" the "crazy artist." Patrick Zampetti: George Hopkins was the glue that held it all together. He was a very young director but he was still able to get the members of the corps to focus on self-improvement without being distracted by the performance of the judging community or the other competing corps. George Hopkins: (Musically) it was a matter of piecing tunes together. We decided to keep "Rocky Point Holiday," a success by any standard. This was at a time when corps kept a good portion of their show from year to year. And then we added selections from "Mass" (Leonard Bernstein) to that starting point. I remember watching a video of the "Mass" over and over and over! We did what we did and what we liked. We were trying to carve a niche, and perhaps do well.
We had no idea a revolution was underway. Al Chez: The biggest help was that Zingali's drill was so musical. It was not a bunch of drill pages. It was more a visual musical score. Back in 1983, the late Zingali said, "I tried to set a new design standard through visual motion – through making motion interpret the music. The show concept is one of fluid motion that never stops, an intertwining ceaseless motion, but it was a stage for the kids, and the ultimate effect was conveyed in their emotions." Jim Prime: Music from Bernstein's "Mass," which we thought offered a lot of different opportunities for the group, was proposed. With some summer revisions, the show fell into place. Not a flawless total show concept, but put in historical development context of the activity, the 1983 show was strong in terms of relative delineation and completion of ideas. Eric Sabach:(I remember) The first time we played "Almighty Father" from Bernstein's "Mass" in rehearsal and then about two months later in a winter standstill at William Paterson College and the whole audience was silent at the end of the song -- we knew we were going to create new reactions and emotions from the audiences that we would see in the summertime. On Friday, we'll look at the marching members of the 1983 Cadets, and how winter rehearsals progressed. Purchase the 1982 – 1986 "Collector's Series" CD collection, which includes the entire Garfield Cadets' 1983 performance. Cast of Characters: Greg Cesario – Cadets' dance choreographer in 1983; still a drill designer Michael Cesario – Cadets' program coordinator in 1983; now a uniform designer and college professor Al Chez – Cadets' brass technician in 1983; now trumpeter on "The Late Show with David Letterman" George Hopkins – director of the Cadets in 1983; still that corps' director Mike Moxley – Blue Devils' designer and instructor in 1983; would become Blue Devils' executive director in 1984; now a stockbroker in San Francisco Jim Prime – Brass arranger for 1983 Cadets; still a drum corps brass arranger Eric Sabach -- Garfield Cadet baritone player, 1981-1984; currently a DCI judge. Johnny Sanchez – Garfield Cadet baritone player in 1983; currently Phantom Regiment's drill designer Marc Sylvester – Cadets instructor in 1983; will design the Cadets' 2004 show Patrick Zampetti – Cadets snare tech in 1983; founded Studio Z architecture firm in Richmond, Va. George Zingali – Cadets drill designer in 1983; died in 1992