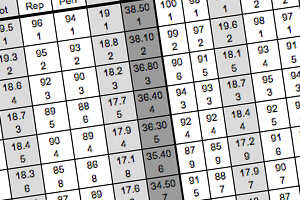 The scores of the Visual Effect and Music Effect captions are counted for full value, but the scores of the three Visual captions (Visual Proficiency, Visual Analysis and Color Guard) and three Music captions (Brass, Music Analysis and Percussion) are each divided in half before being added to the final score, since each of those six judges scores on a scale up to 20.0 max. (If each of those captions were scored up to 10.0 max, to get the same number of possible scores, the judges would have to use half-tenths and carry each caption out to two decimal places instead of just one.)

Vanguard Cadets (1st, 96.15) took 1st in both Effect captions, Visual Proficiency, Color Guard and Brass. All but 0.05 of the 0.45 spread over Blue Devils B came from the corps' 0.40 advantage in total General Effect, (combining Visual Effect with Music Effect). The combined advantage of 0.90 over BDB in Visual Proficiency, Color Guard and Brass accounted for 0.45 of the actual final score once those captions were divided in half. That, combined with total Effect, put Vanguard Cadets 0.85 over Blue Devils B before taking into account BDB's total advantage of 0.40 in the combination of Visual Analysis, Music Analysis and Percussion (after the 0.80 advantage in the raw score of those captions was divided in half). Vanguard Cadets was 2nd to BDB in each of those captions. That 0.40 deficit to BDB, subtracted from the 0.85 advantage in the previously mentioned captions, is what gave Vanguard Cadets a total winning spread of 0.45.

Blue Devils B (2nd, 95.70) was 1st in Visual Analysis, Music Analysis and Percussion by margins over Vanguard Cadets as mentioned above. Four of the remaining five captions placed 2nd, but Color Guard took 3rd—as it did in the Semifinals—slipping both times under Vanguard Cadets and Spartans.

Genesis (3rd, 91.55) was elevated to a medalist position by achieving 3rd-place finishes in Music Effect and all three Music captions. The corps finished 4th in Visual Effect, a full 0.90 down to Vanguard Cadets. In comparison, that was the same margin the corps finished behind the Champion in the combined total of all three Music captions. 5th-place finishes in Visual Proficiency and Visual Analysis, coupled with 6th place in Color Guard, wasn't enough to drop the corps behind Spartans and Music City, each of those corps placing ahead of Genesis in all three Visual captions.

Spartans (4th, 90.55) took 2nd in Color Guard, the first year the guard didn't win the caption since the corps returned in 2010 from a year of inactivity. The guard was only 0.10 down to Vanguard Cadets in both Semifinals and Finals. The corps' strength was in the Visual captions and its relative weakness was the Music captions. They took 3rd in Visual Effect, Visual Proficiency and Visual Analysis, but 4th in Music Effect, 5th in Percussion and 6th in Brass and Music Analysis. Being 1.90 down to Genesis in the combined Music captions accounted for far more than the corps' 1.05 total deficit to Genesis, and its 0.80 deficit to Music City in combined Music almost wiped out its total advantage over that corps of just 0.20. (In Semifinals, the corps placed 5th, 0.25 under Music City.)

Music City (5th, 90.35) was 4th in Music Effect, Visual Proficiency, Visual Analysis, Brass and Music Analysis. The corps couldn't hold on to 4th place due to 5th place in Visual Effect and Color Guard and 6th place in Percussion. While Percussion only accounted for 0.20 of the total spread under Spartans, the Color Guard score accounted for 0.50 of the total spread under its nearest competitor.

Gold (6th, 88.75) moved up a spot from Semifinals, despite dropping one spot in Music Effect, Brass and Music Analysis and remaining in the same positions in the other five captions. The corps' highlight was 4th in Color Guard, perhaps due to the stunning contribution of the members of the martial arts school from China. Visual Effect and Visual Analysis took 6th, Music Effect and Brass placed 8th, and Visual Proficiency, Music Analysis and Percussion each finished 9th.

None of the remaining corps changed positions from Semifinals.

Colt Cadets (10th, 80.90) was 8th in Visual Effect and Visual Proficiency, 12th in Color Guard and 10th in the remaining five captions, including all three Music captions.

Taipei Yeuhfu (77.35, International Class Champion) was 10th in Color Guard, 11th in both Effect captions, Visual Proficiency and Brass and 12th in the other three captions.

Les Stentors (11th, 76.75) was 11th in both Visual Analysis and Music Analysis, Color Guard and Percussion. The remaining four captions all placed 12th.

Open Class corps now head to Indianapolis, where they will compete head-to-head with all the World Class corps at the DCI World Championship Prelims on Thursday, Aug. 8. The Open Class corps placing among the top-25 will again compete in the Friday Semifinals.