Geoffrey C. Whiting was a member of the Auburn Purple Lancers in 1974, the year the corps made DCI World finals. This year is the 30th anniversary of that feat. 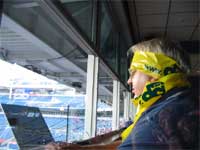