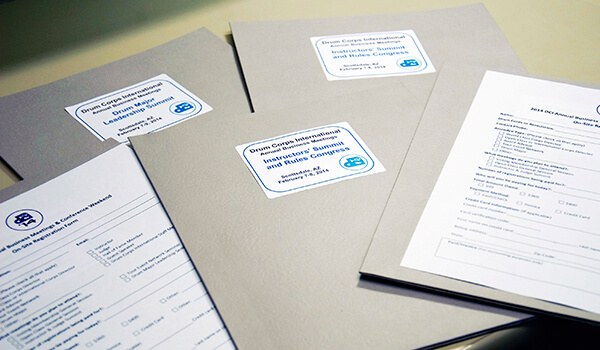 Marking the biggest gathering of the DCI community during the off-season, meetings and workshop sessions are designed to allow the DCI board of directors—along with World and Open Class drum corps—the opportunity to conduct the general business of the association as they prepare and plan for the upcoming summer season.

Highlighting just one small portion this year's meetings will be the first DCI Rules Congress to take place in several years, with two rules change proposals submitted for review and discussion.

Drum Corps International's annual meeting is one of two scheduled times during the off-season that bring representatives from all World Class corps into the same room. With the fall session for the voting membership typically focused on scheduling for the summer, the focus at the winter meeting turns to more general business and a look ahead to the summer months.

"With our 2014 budget approved by the board of directors in November, we'll spend time during these meetings discussing our business strategy with the corps in detail. We'll also take a look back at our 2013 achievements as well as our ongoing opportunities," DCI Executive Director Dan Acheson said.

Other agenda items include annual elections for DCI's nine-member board of directors, a report from a newly-formed business development committee specifically focusing on DCI's digital strategy and online delivery of live events during the summer, and a professional development session for corps managers. Acheson and board of directors chairman Jeff Fiedler of the Santa Clara Vanguard will also facilitate a combined "State of the Activity" discussion with all corps representatives on Saturday morning that will cover the year in review and the season ahead from the corps' perspective.

Drum majors of both World and Open Class corps have been invited to DCI's annual meeting for a three-day leadership workshop. 35 drum majors representing 24 corps are expected to be in attendance, marking a record number for the summit's five-year history.

Drum majors will participate in a series of interactive activities and discussions that are designed to hone team building, goal setting and communication skills, all while helping them build a support network among their peers.

Leading the sessions at this year's seminar, which is organized by DCI Hall of Fame member Gene Monterastelli, will be motivational speaker Fran Kick and a number of award-winning former drum majors from several DCI corps.

"Over time these workshops for the drum majors have evolved to become much more interactive," Monterastelli said. "What's great to see is that even after this weekend is over, they'll continue working together with their group leaders and touching base online and over conference calls throughout the spring."

Open Class directors will begin their sessions in earnest the evening of Friday, Feb. 7. A variety of topics will be on the agenda including annual elections for the Open Class Advisory Committee, a review of the 2014 DCI Tour schedule, and collaborative sessions discussing best practices for recruiting, fundraising, and travel logistics and procedures. As the one time that directors have the opportunity to meet as an entire group in person outside of the summer touring months, Open Class Coordinator David Eddleman says that the time spent together at these meetings is significant to conducting Open Class business.

In addition to directors from the current roster of Open Class corps, representatives of four new groups that have applied to compete in Open Class events this coming summer have been invited to attend. Those groups include Eruption from Washington, Golden Empire from California, Guardians from Texas and South Carolina's Coastal Surge, a group that enjoyed the opportunity to perform in exhibition at several DCI events in 2013. New and re-emerging Open Class corps wishing to participate in the Drum Corps International Tour annually undergo an extensive evaluation process supervised by the Open Class Advisory Committee (made up of seven Open Class corps directors) and key members of the DCI staff who monitor progress and offer assistance.

"We applaud and support these groups' efforts to bring new drum corps into the activity," Eddleman said.

For the first time since 2011, two rules proposals have been submitted for consideration at the DCI annual meeting. Members of the drum corps instructional community will be the first to review and discuss them in Scottsdale.

Conducted on an annual basis in more recent years, after a new judging system was implemented in 2012 and time was taken to let the changes settle in, DCI Artistic Director Michael Cesario says that the Drum Corps International collective has returned to a system where rules change proposals are presented biennially.

"The year in between is when we can stabilize the rules that just went into effect," Cesario said. "It's an opportunity to detail them and to make sure all the judges are on board with the rule moving forward and that it's being interpreted the way the corps want it to be interpreted. It also leaves the opportunity to test potential rules that may be proposed in following seasons."

The two rules proposals presented for review and discussion at the 2014 DCI annual meeting were both submitted by Madison Scouts Artistic Director James Mason. The first proposal addresses the instrumentation of a drum corps ensemble, recommending that any brass instrument, even those not of the "bell-front" variety as stipulated in the current DCI rulebook, be allowed in competition. This proposal aims to give corps the ability to utilize a full range of brass instruments not currently allowed by DCI rules such as trombones, French horns and sousaphones.

Read the "Instrumentation" proposal in its entirety:

The second proposal aims to create an "Entertainment Effect" caption as part of the adjudication process. According to the submission, corps would be awarded points based on their "art of communication with the audience." The proposal is similar in nature to one also submitted by Mason and the Madison Scouts in 2011, which at the time was passed along to a task force for further development and consideration.

Read the "Entertainment Effect" proposal in its entirety:

During the scheduled sessions, instructors will meet by caption in individual caucus sessions to discuss the proposals. One staff member from each eligible corps (World Class member corps and the previous season's Open Class finalists) will be polled to determine whether or not the proposal should be passed along to the full membership to debate, discuss and eventually vote on in the final round of the rules change process.

"The voting membership will be presented with an outline of what happened during the caucus discussions," Cesario said. "This helps the members better understand what's being presented for a vote and helps enrich and inform their decision."

According to Cesario, the two rules submitted this year are just the tip of the iceberg of what instructors will be exposed to and discussing in Arizona.

"There are five or six or seven other things on the plate that aren't rules changes per se, but warrant discussion from this group," Cesario said. These other items cover a wide range of competitive topics from field markings and measurements to the placement of judges on the field during a contest to the interpretation of wording on DCI's adjudication sheets.

"Sometimes these are only two or three word phrases or concerns about judge interpretations of certain things that we'll be talking about," Cesario said. "What we may be doing is taking a poll and getting a general idea of the corps' feelings, concerns and outlook on several things that will help guide future discussion, testing and potential implementation."