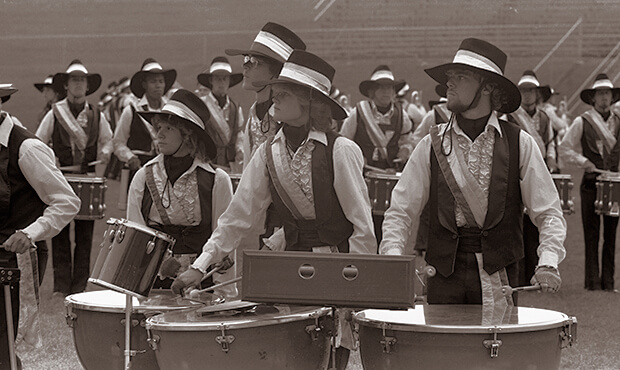 1981 Sky Ryders
Drum Corps International held its 10th World Championship Finals in 1981 at Olympic Stadium in Montreal. That year PBS had difficulties arranging to do its usual live broadcast from Canada, so corps performances were taped at the DCI Midwest event in Whitewater, Wisconsin, two weeks earlier. Notable happenings from 1981 included Santa Clara Vanguard becoming the first and only corps to date to win the DCI title after not being among the top six corps the year before. Blue Devils came within three tenths of a point from enjoying a three-peat, and would have accomplished that honor had it not been for the corps' ninth-place finish in percussion. For the first time, "grounded" front ensemble percussion instruments were allowed that began to replace the heavy mallet keyboards that corps traipsed across the field since DCI's founding. Though the Sky Ryders slipped to 14th in Montreal behind the Freelancers and North Star, the corps was among the top-12 finalists at DCI Midwest and is thus preserved on video. The corps' 1981 production kicked off with "Faces," the final track on Earth, Wind & Fire's 10th studio album of the same name, released in 1980 and considered the band's final "classic" album before it veered toward a heavier dose of digital electronics. Interestingly, the one stationary mallet instrument you see in the accompanying video clip is one of the few bass marimbas ever seen on the field. Note how large the resonators are compared to the resonators on the marimba that is being carried. Today, such an instrument is well within the lower range of the five-octave marimbas that are found in many front ensemble percussion sections. The group's percussion feature "Night Streets" came from Chick Corea's 1976 album, "My Spanish Heart," which was noted for combining Corea's Latin music influences with jazz-fusion. For the first several measures, the snare drummers played on the drumheads with their hands instead of using sticks. The concert standstill production was "Fire Dance," co-written by Eastman School of Music friends Jeff Tyzek and Allen Vizzutti for Woody Herman's 1978 album, "Road Father." The album was noted for being recorded direct-to-disc without the use of any multi-track recording techniques, such as overdubs. Many know Vizzuti for his stellar trumpet performances, but he's also played on more than 150 movie soundtracks. Tyzek, also a noted trumpet player, is the principal pops conductor for six different orchestras in the United States and Canada. The end of the piece featured some of the most outstanding high-note bugle playing of the 1980s, performed by seven of the corps' soprano players. 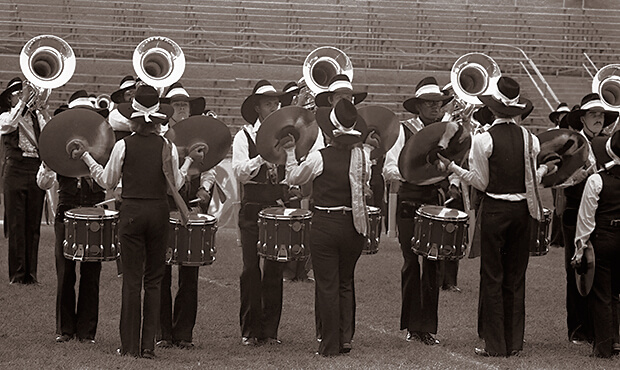 1981 Sky Ryders
George Tuthill's original percussion feature, "Storm," received a huge ovation from the audience when the 14 color guard rifles lined up across 35 yards and nailed a sequential toss down the entire line. That was followed by the middle rifle spinners in each of the two groups of seven on either side of the 50-yard line tossing their rifles high in the air while each of the other 12 tossed their rifles to the guard member standing four rifles away. The corps' closing piece began with "Here's That Rainy Day" by Johnny Burke and James Van Heusen. It's been known as one of the most recorded songs by lounge singers and big-ticket singers alike. Sky Ryders' rendition was based on Dee Barton's arrangement for the Stan Kenton Orchestra, as recorded on Kenton's 1970 "Live at Redlands University" album. Fitting the visual to the music, the corps formed a large umbrella form and rotated it while six guard members at the curved bottom of the umbrella's handle spun multi-colored umbrellas. The closer segued into "Over the Rainbow," written by composer Harold Arlen and lyricist Edgar "Yip" Harburg for the 1939 film, "The Wizard of Oz," the movie that made Judy Garland a star. During a big company front push forward, the corps unveiled a 10-yard-wide rainbow prop in the back of the field, behind which dozens of balloons were released into the air during the final counts of the show.

For this week only, you can save on the Legacy Collection DVD that contains this complete Sky Ryders performance.

Michael Boo was a member of the Cavaliers from 1975-1977. He has written about the drum corps activity for more than a quarter century and serves as a staff writer for various Drum Corps International projects. Boo has written for numerous other publications and has published an honors-winning book on the history of figure skating. As an accomplished composer, Boo holds a bachelor's degree in music education and a master's degree in music theory and composition. He resides in Chesterton, Indiana