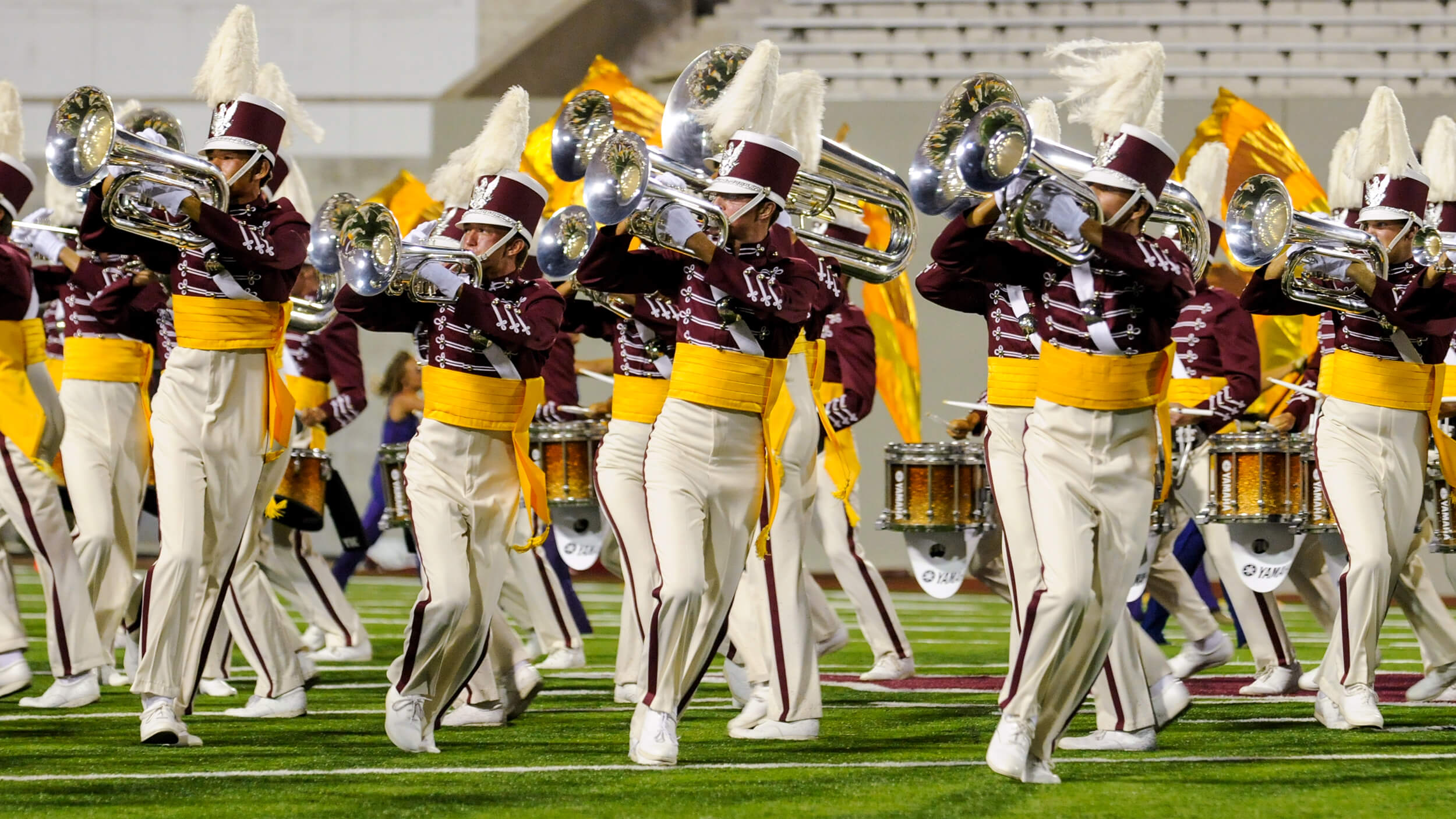 After successfully propelling the plotline of the corps’ production “This I Believe” with narration in 2007, The Cadets doubled down on that commitment to storytelling in 2008’s “...and the pursuit of happiness.”

With compositions primarily from American composer Frank Ticheli, the show took some of its inspiration from the popular National Public Radio show/podcast “This American Life.” As described on the show’s website: “Our favorite sorts of stories have compelling people at the center of them, funny moments, big feelings, surprising plot twists, and interesting ideas. Like little movies for radio.” Taking a similar theme and approach, The Cadets chose to tell the story of fictional character Sarah Jones and the pathway she took in life to find true happiness.

A circular stage platform set on the center mark of the 50-yard line provided the hallmark of this production. The minimalistic theatre-like staging included a window, carpet, two wingback chairs and a side table with a vase and flowers. Two corps members playing the characters of the interview host and Sarah Jones remained there the entire program, acting out the narration that provided the backbone of the production.

According to Cadets staff coordinator Eric Kitchenman, the use of narration, which by DCI rules was still just a few years old in show designers’ toolboxes at this time, aimed to make an emotional connection with audiences. “We incorporate voice in just the right manner wherein emotion is drawn from the performers to the fans and back again,” Kitchenman said in a pre-season interview about the production. “Our programming takes the audience through an array of highs and lows that one would associate with how we look at our lives and the manner in which we progress through a lifetime.” 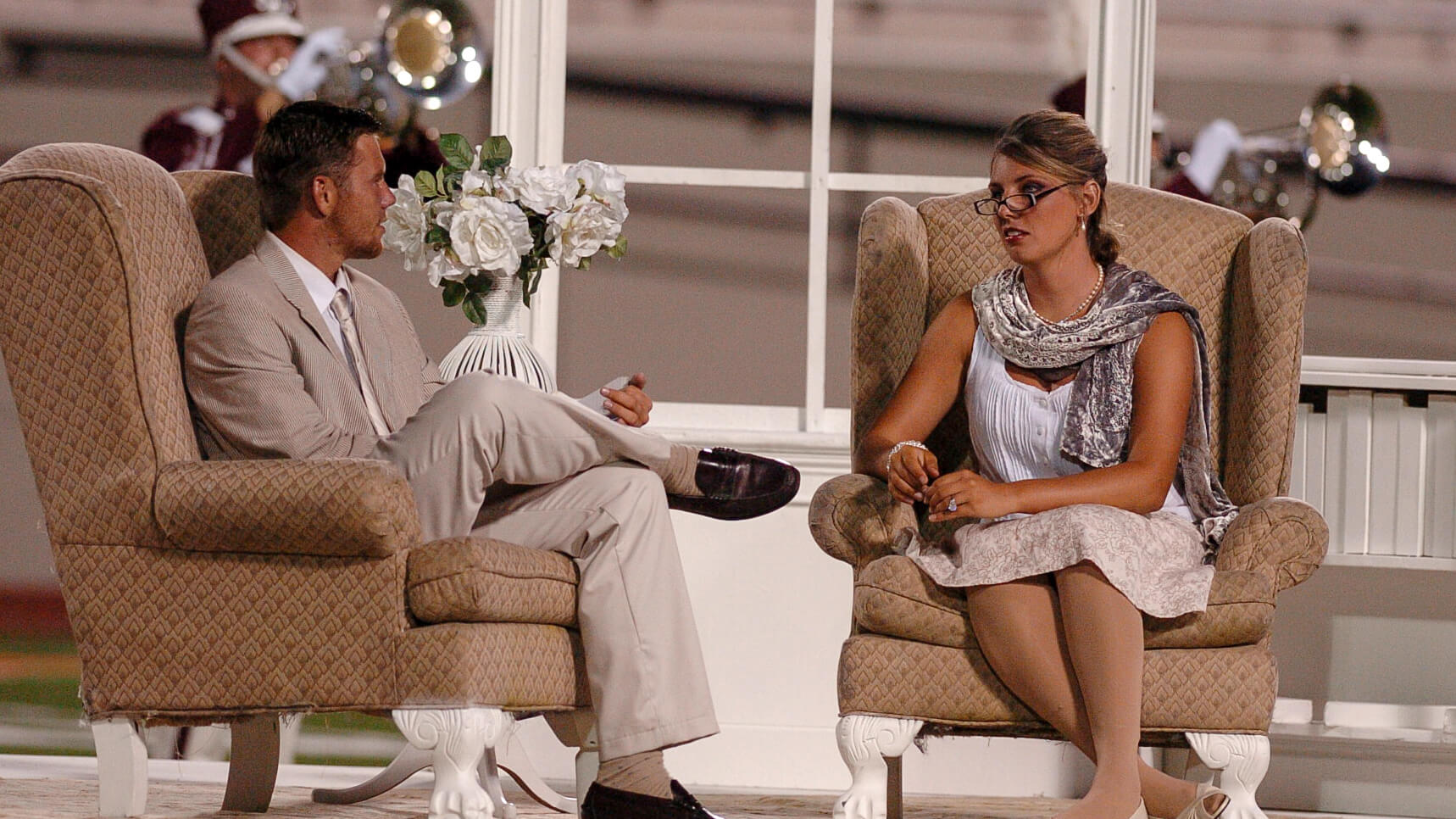 The Cadets wore their classic uniforms in 2008 which included white shoes, cream pants with a maroon stripe down each leg, and their maroon West Point-style military jacket with gold cummerbund and tasseled drop sash. A white cross strap and mirrored buckle along with a maroon and white shako with silver eagle shield and white plumage finished the look. Color guard performers wore purple pants and short-sleeved shirts in various different cuts that had accents of either purple or red.

The show kicked off with the entire corps in concentric circles around the central stage set. Marching backward to expand outward, the horn line came in with a low droning note as the voice of Sarah Jones recited the preamble to the Declaration of Independence: “We hold these truths to be self-evident, that all men are created equal, that they are endowed by their Creator with certain unalienable rights, that among these are life, liberty and…”

Instead of saying the next line, “the pursuit of happiness,” the narrator instead drew out the word “and” as the corps’ horn line turned to the front of the field and entered with a brief but soaring statement of “Simple Gifts” from Aaron Copland’s “Appalachian Spring.”

More spoken word followed introducing the audience to the two narrators and the premise for the interview which was staged as part of the fictional show, “Life in America.” The host promised to give a look into the life of Sarah Jones as she talked about “her past, her present, and her pursuit of happiness.”

Providing an introspective soundtrack underneath this initial narration, the horn line played Frank Ticheli’s “An American Elegy.” He composed the concert band piece in memory of those who lost their lives in the Columbine High School shooting in 1999, writing in the program notes: “It is offered as a tribute to their great strength and courage in the face of a terrible tragedy. I hope the work can also serve as one reminder of how fragile and precious life is and how intimately connected we all are as human beings.”

Giving the horn line an opportunity to crank the volume, the next musical interlude picked up the pace with Ticheli’s “Nitro,” which delved into Sarah Jones’ college years and her reveling in her youthful freedoms. “The independence of doing what I wanted when I wanted—It was a fast and furious life, and I loved it,” she said.

The next narrated segment introduced Jones’ pursuit of courtship and love. “Strong, smart, ambitious, I was absolutely looking for the man of my dreams,” she said. Frank Sullivan’s lively “Round 4” gave the color guard section a chance to showcase their dance moves, as a featured female and male duo took the spotlight while the brass and percussion sections traded musical passages back and forth. 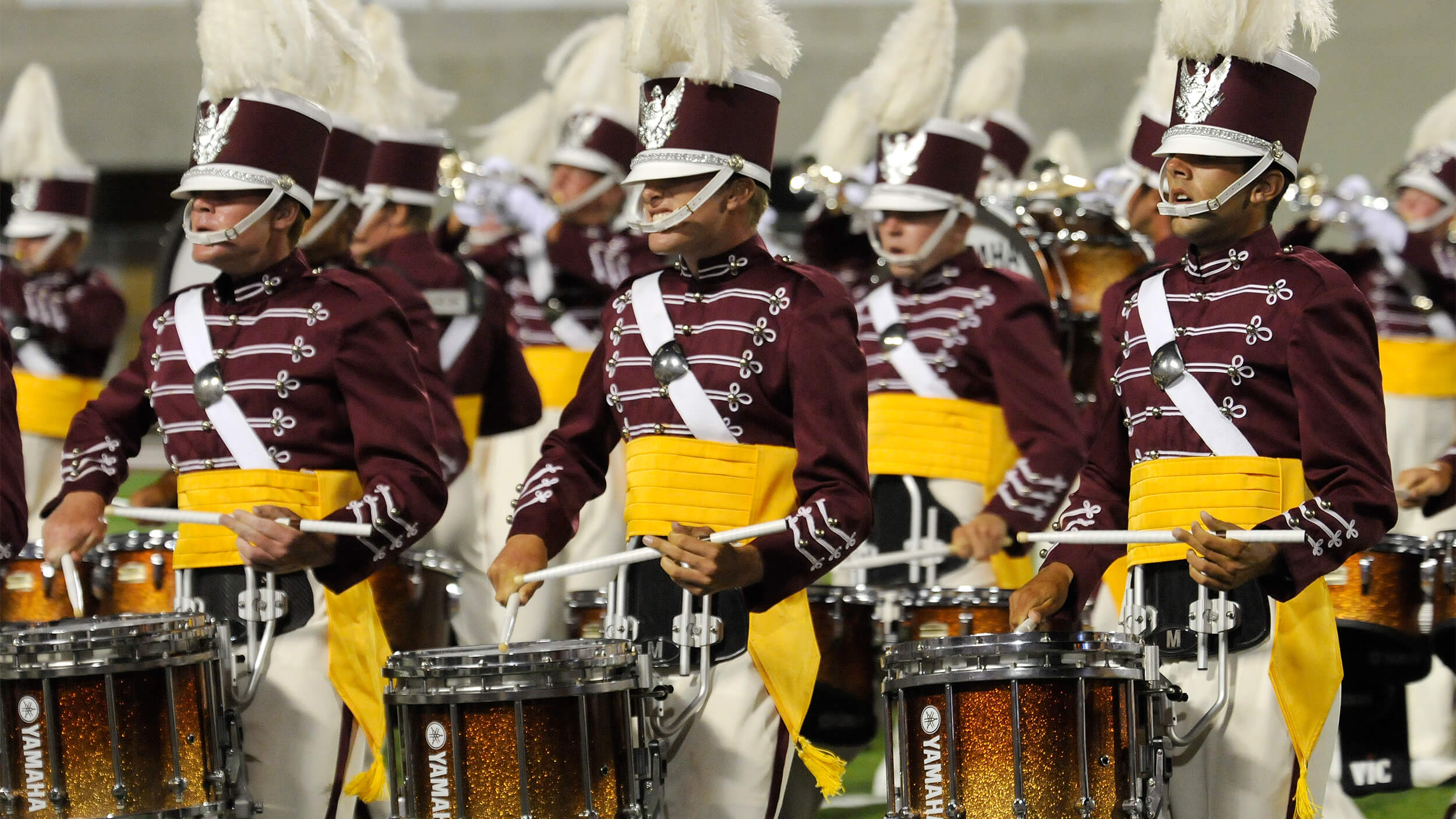 Focusing on the pursuit of happiness related to work, money and power, the next section led the audience through Jones’ life working on Wall Street. A clever color guard moment during a line of narration—“The excitement and the fast pace were wonderful. The speed, the tension the action, I always had to be one step ahead.”—had a color guard member running more than 30 yards across the front of the field acting as the catalyst of a sequential saber toss. As she passed the final performer’s throw on the 20-yard line, she stepped forward just in time to make the catch herself.

Ticheli’s fast-paced “Vesuvius” added tension to this segment that eventually had Sarah Jones come to a contemplative realization. “I see now that happiness isn’t something to be chased, it is not something to find,” she said. “It is here in the world. It is present in every moment, and each day should be a celebration of how lucky we are to be part of this wonderful world.”

In classic Cadets fashion, the corps dramatically accelerated into the ending, marching through a dizzying array of drill formations while reaching speeds upward of 200 beats per minute.

...and the pursuit of Carolina Crown 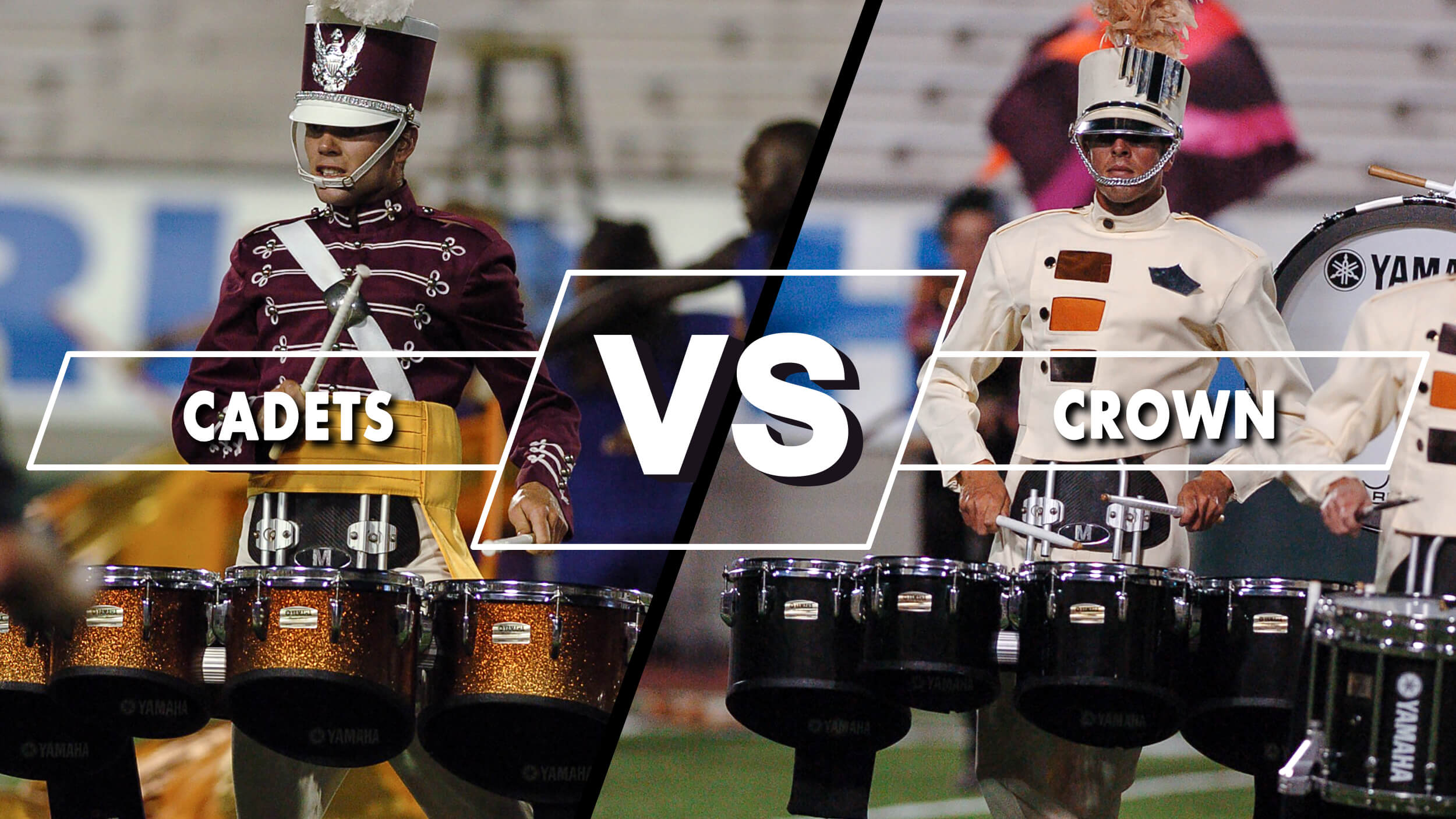 In 2008, Carolina Crown finished the season ahead of the Cadets for the first time in history.

Ultimately besting The Cadets at the DCI World Championship Finals in Bloomington, Indiana, Carolina Crown provided some of corps’ stiffest competition throughout the 2008 DCI Tour.

The Cadets got off to a strong start against Crown in the first half of a season that saw the two corps face each other head-to-head on 20 different occasions. Through June and the first week of July, The Cadets finished ahead of the South Carolina corps in the first six matchups by more than a point.

Carolina Crown snuck ahead by a slim margin of a half a point on July 12 and again on July 15 by just 0.350 points before the Cadets turned the tables in the next two shows, posting a 1.1-point advantage over Crown when the corps reached Texas on July 17. 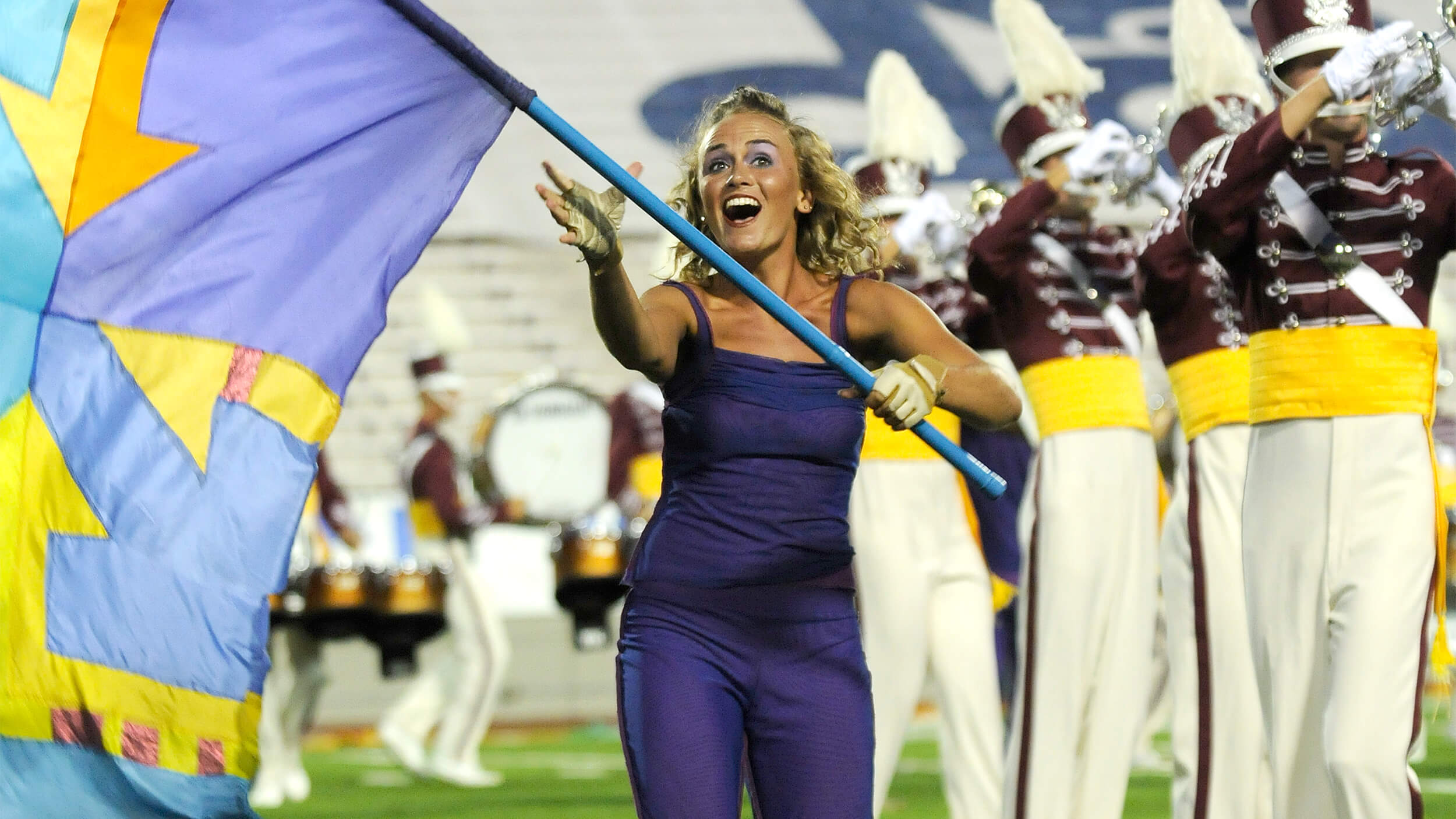 July 19 at the DCI Southwestern Championship in San Antonio, however, proved to be the turning point for Carolina Crown, as the corps finished the next 10 events ahead of The Cadets including the DCI World Championship Finals.

On the judges’ scoresheets at the Finals, The Cadets came within 0.350 points of Crown in the visual caption, but Crown’s one-point and 0.700-point leads in the general effect and music captions respectively sealed a more than two-point advantage overall to end the season ahead of The Cadets for the first time in history.

After taking home a silver medal at the 2007 DCI World Championships in Pasadena, 2008 did mark a minor setback for The Cadets competitively. The corps bounced back in 2009, however, getting back on the medal stand with a third-place finish before earning a World Championship title in 2011.