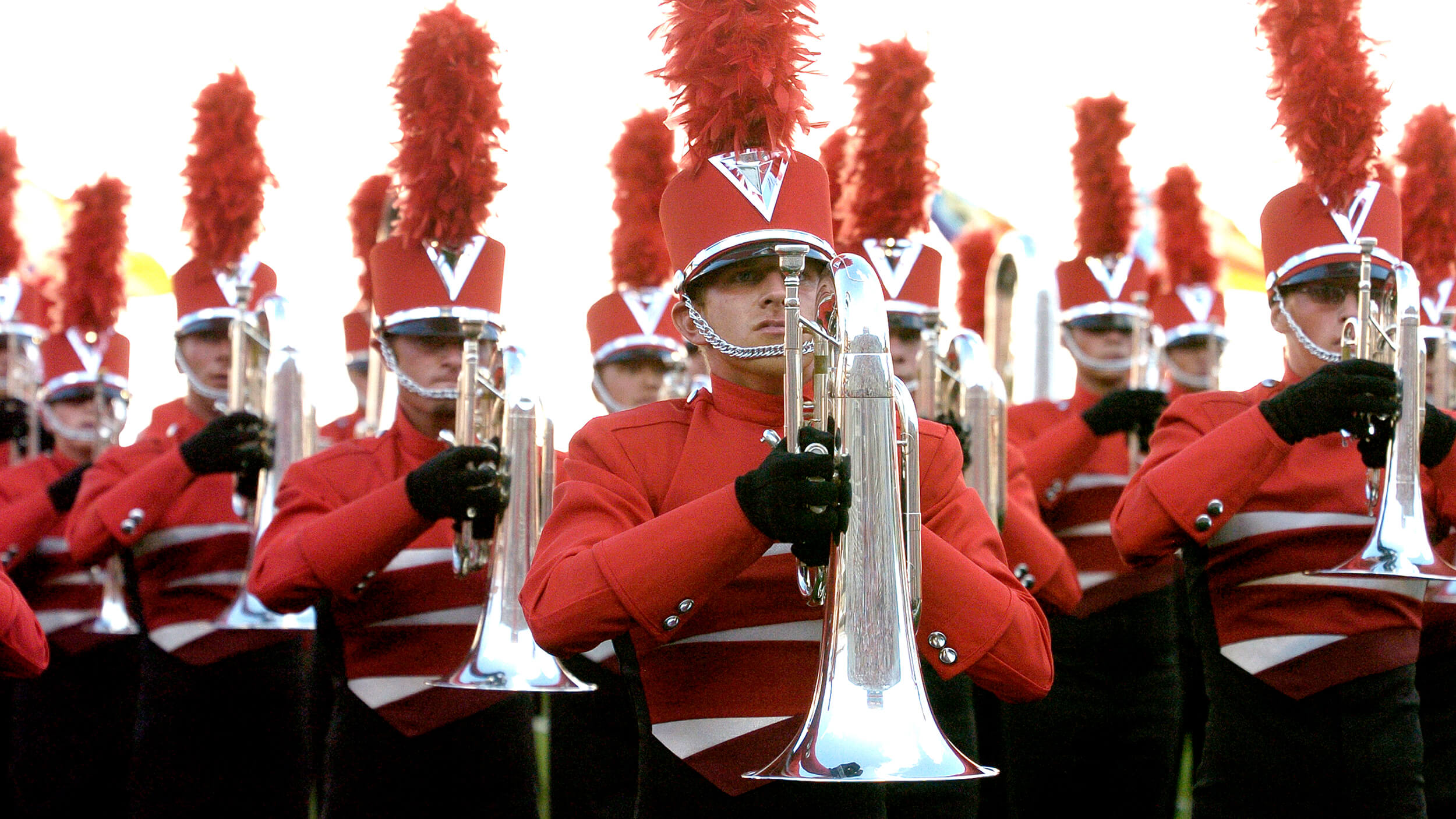 Due to construction delays with the brand-new Lucas Oil Stadium in Indianapolis, Memorial Stadium at Indiana University instead hosted the 2008 Drum Corps International World Championships.

Outside of the Top 12 corps, Crossmen finished in 13th place, under a half point from advancing as a finalist for the first time since 2004. Crossmen had earlier in the season beaten the 12th-place finalist Madison Scouts four times, and the Colts previously bested the Scouts eight times.

Spirit fell to 15th place after placing 12th the previous three years and the 16th-place Troopers advanced into the Semifinals for the first time since 1995. Pacific Crest, ended the season with a score of 79.650, enjoyed its highest Semifinals score up to that time. 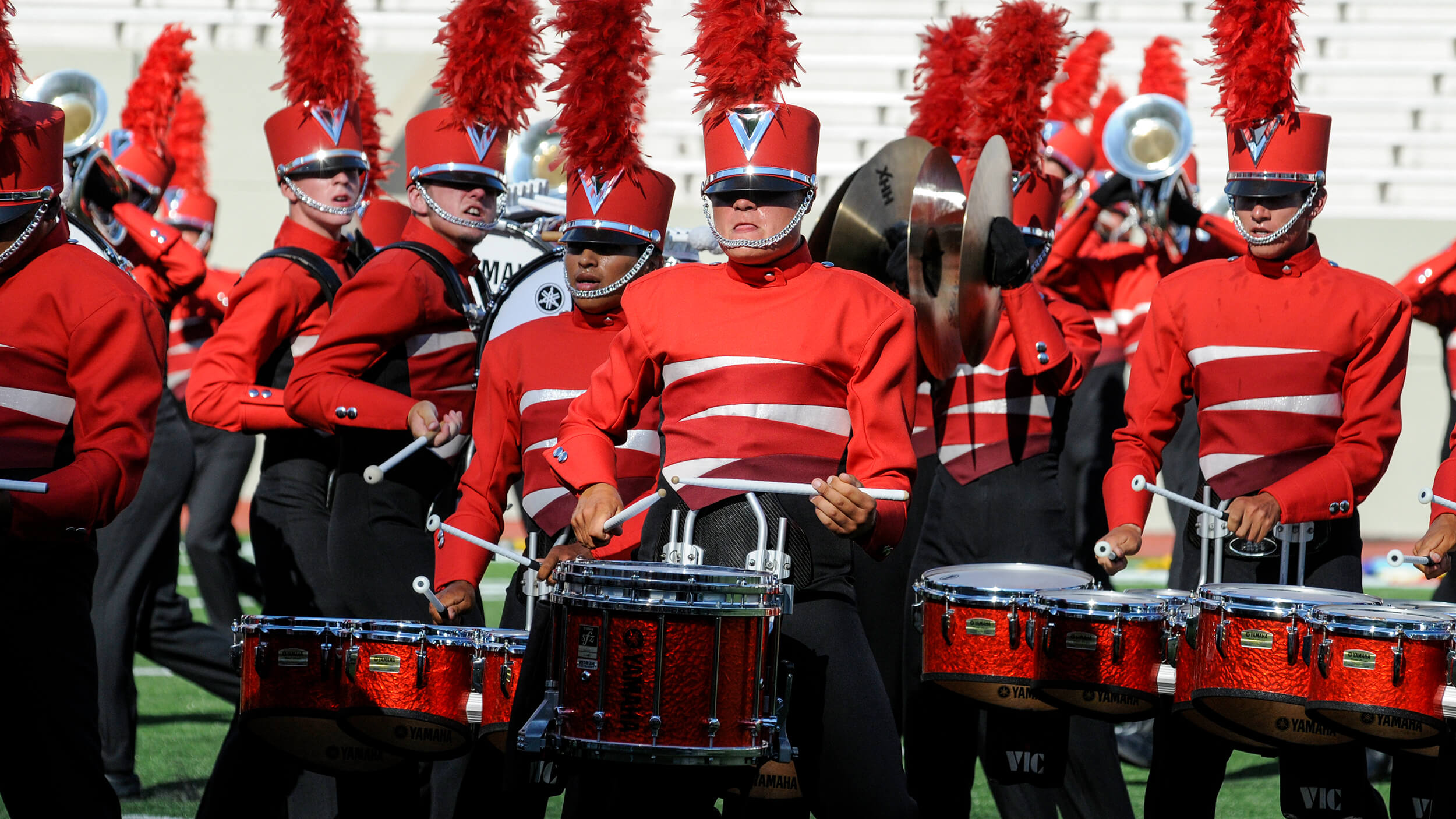 Colts’ 14th-place “Night and Day” chronicled the after-dark hours of a thriving metropolis, opening with chimes ringing the peal of London’s Big Ben.

The opening segment, titled “Sunset in the City,” led into a brash fanfare statement of Cole Porter’s immortal and bittersweet romantic classic pop song, “Night and Day,” written for “Gay Divorce,” a 1932 musical. Fred Astaire sang the tune on stage and also in the 1934 film adaptation of the musical. The song remained so popular over several decades that hundreds of artists the likes of Frank Sinatra, Ringo Starr, and even U2 recording their own versions.

A lone color guard member twirled a large flag of blue and purple surrounding a silver crescent moon. Other members of the guard twirled yellow, red, and orange flags, triangular orange rays above the top of a setting sun introducing the evening hours that provided the setting for the rambunctious action of the following medley of Leonard Bernstein music.

The male members of the color guard first appeared wearing sailors’ hats in the segment titled, “Times Square/Curtain Time,” playing off the theme of Bernstein’s “On the Town.” The percussion section introduced the rowdy “New York, New York,” with a lone male up front brandishing a flag of the New York City skyline. Lit windows on the skyscrapers and the yellow and red colors in the background of the flag reinforced the energy of the early evening hours.

Yellow flags decorated with a strip of black and white checkers inferred the iconic Checker Cab vehicles that are ever-present in New York City, weaving through the bustling momentum of the city streets. The 1944 full-length Broadway theatrical production of “On the Town” was spawned by the “Fancy Free” ballet from earlier in the year, further exploring the same theme of three sailors on a 24-hour leave in The Big Apple.

“The Great Lover” from “On the Town – Three Dance Episodes” was the second song in the Bernstein medley. In the musical, this is where one of the sailors, the hopeless romantic Gabey, fell asleep on the subway and dreamt of wooing the New York transit system’s Miss Turnstiles. Colts brass players produced a series of auto horn sound effects while the taxi flags spun furiously in a traffic jam of color guard members backed up behind the horn line. 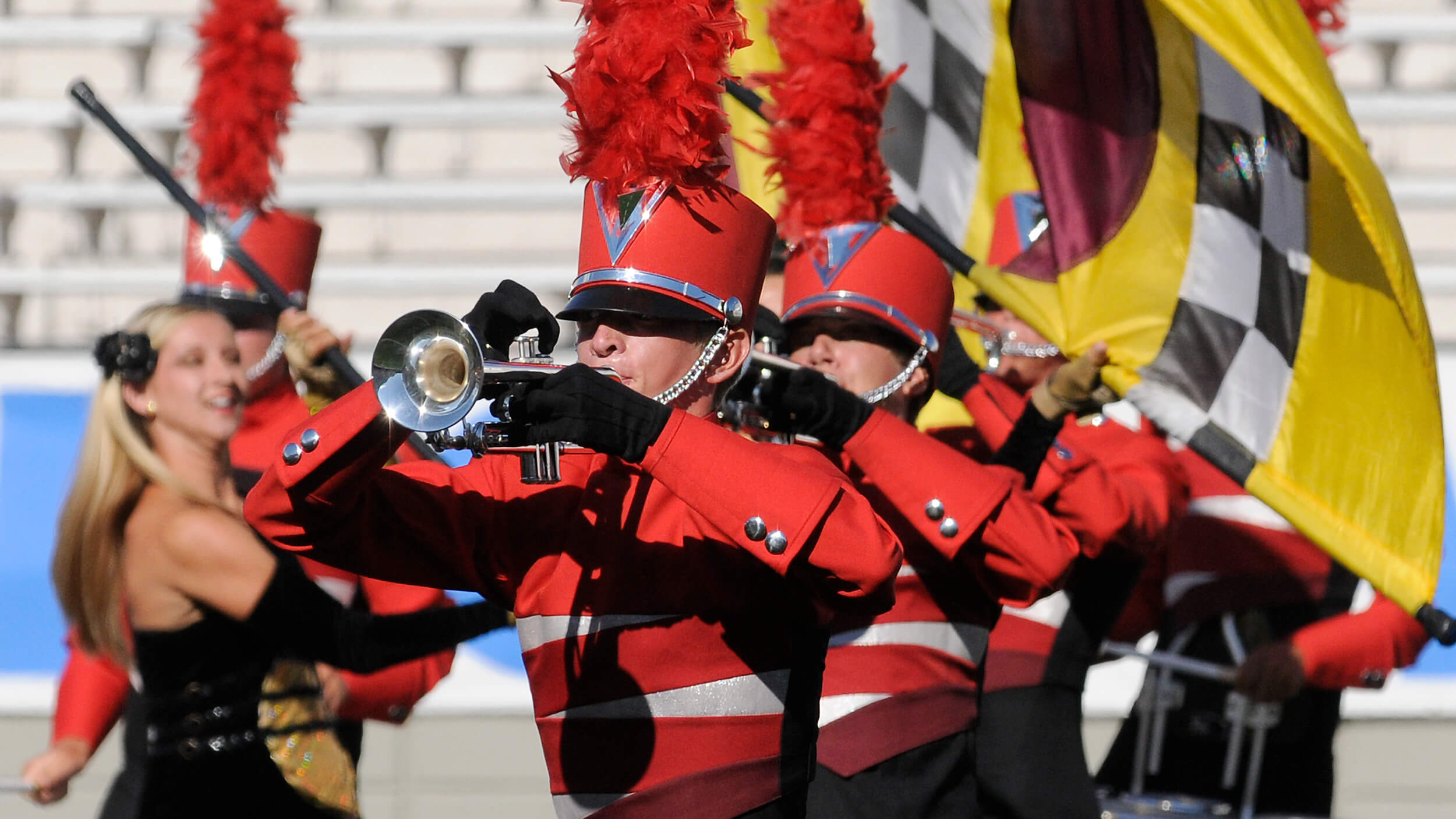 A brief glimpse of “Mambo” played by the Colts’ percussion preceded Bernstein’s “Dance at the Gym – Blues,” from “West Side Story,” the 1957 musical set in Manhattan that was inspired by the Shakespearean story of “Romeo and Juliet.” The brass players formed a 40-yard long arc at the front of the field to enthusiastically shout out the melody, leading into a brief fling of the fiery “Dance at the Gym – Mambo.”

A repeat of the Big Ben chimes from the intro introduced a percussion interlude of Ludwig van Beethoven’s “Adagio sostenuto” movement of his 1801 “Moonlight Sonata.” Two circles of brass players, mirrored on the front and back of the field, rolled to the left over two straight lines of horns, picking up and then disgorging those horn players. It was one of the more intriguing large-scale visual maneuvers of the year.

The next segment, “Moonlight in Central Park,” explored the emotions of tender loneliness and the inner reflection of a stroll through Central Park to the romanticism of Andrew Lloyd Weber’s “Unexpected Song” from the 1982 musical, “Song and Dance.” A large transparent black flag of a crescent moon was punctuated by dots of stars and illuminated abstract images suggesting windows in the darkened skyline.

Several transparent black flags with a silver crescent moon introduced a short overlay of Webber’s “Music of the Night,” enhanced by a color guard member twirling and tossing a baton. Multitudes of the black flags with images of the crescent moons filled the entire right side of the field, with the baton twirler lifting the female who had spun the earlier flag of twinkling stars.

The night turned into day as a single female attired in a bright yellow dress spun a large bright yellow sun flag. Other flags of dark blue and yellow vastly outnumbered her, the silks featuring “man in the moon” faces. Still, the prominence of her yellow dress and flag, coupled with the yellow on the other flags, showed the last gasp of night being conquered by the arriving brightness of day.

A short restatement of “Unexpected Song,” played as the horn line formed a company front and pushed the remainder of night out of the picture. The show ended with horns and drums in a solid box as the single large all-yellow flag continued to spin, informing the sailors from earlier that their shore leave was up.