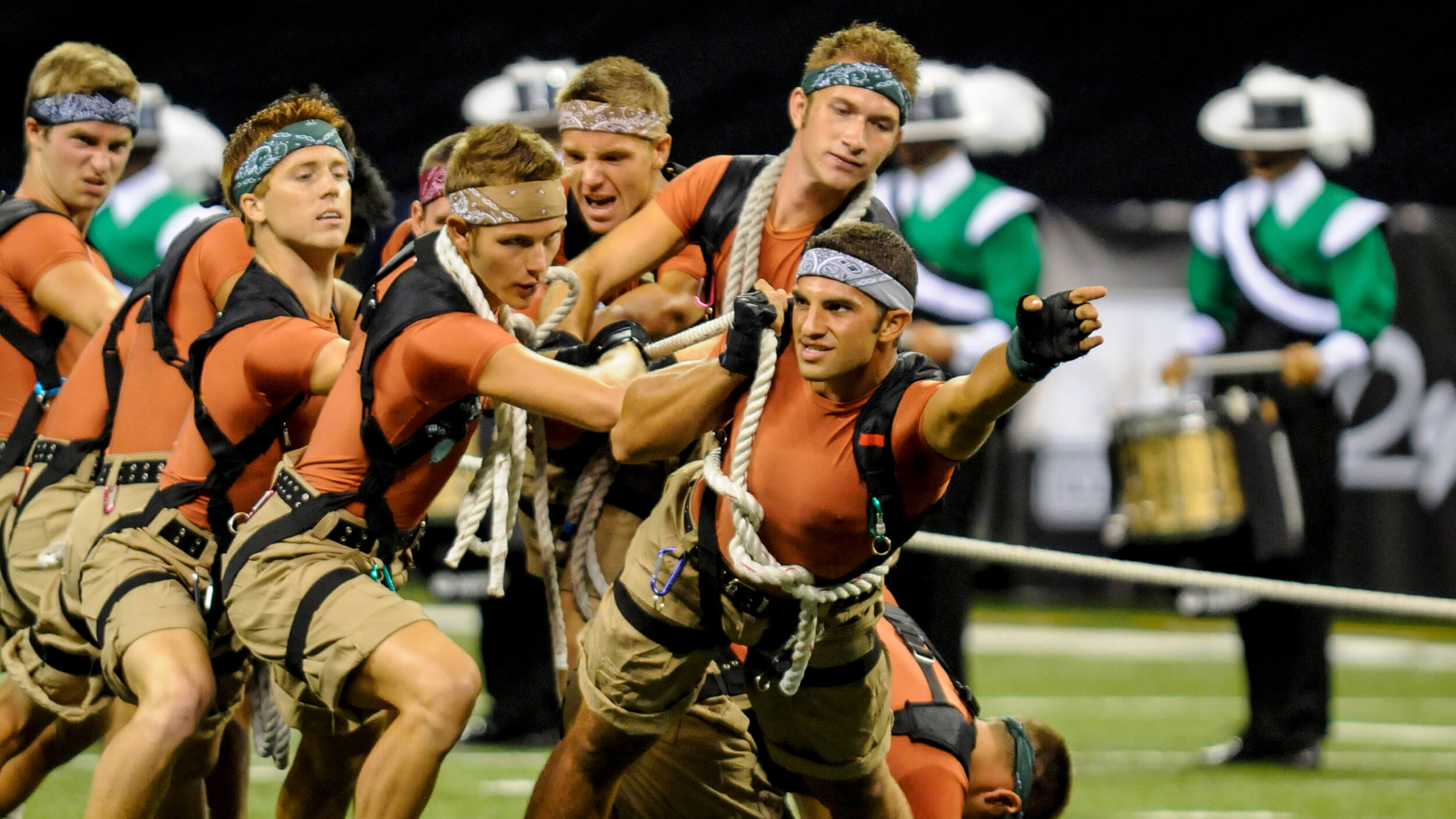 The 2009 Drum Corps International Tour marked the first to culminate at Indianapolis’ Lucas Oil Stadium for the DCI World Championships. The new indoor venue was all the more appreciated when the outdoor heat index that week sailed past 100 degrees during the competitions.

With their “1930” production, the Blue Devils ended the season undefeated to take home the corps’ 13th World Championship title, besting Carolina Crown’s “The Grass is Always Greener” by 1.55 points. The Devils captured four of the five caption awards and received perfect scores from three judges on Finals night.

The Holy Name Cadets, celebrating the corps’ 75th anniversary by taking on the corps’ original name for the season, finished just three tenths of a point under Crown. For the sixth decade in a row, the Allentown, Pennsylvania corps played something from “West Side Story.” Cadets’ success knocked The Cavaliers into fourth place and out of a medalist position for the first time since 1999.

Santa Clara’s fifth-place score of 95.650 was a record for that placement, only broken in 2014 by Carolina Crown’s fifth-place score that was just 0.025 points higher. Phantom Regiment slipped to ninth place after winning the title the prior season, and the 12th-place Troopers earned a finalist berth for the first time since 1986. 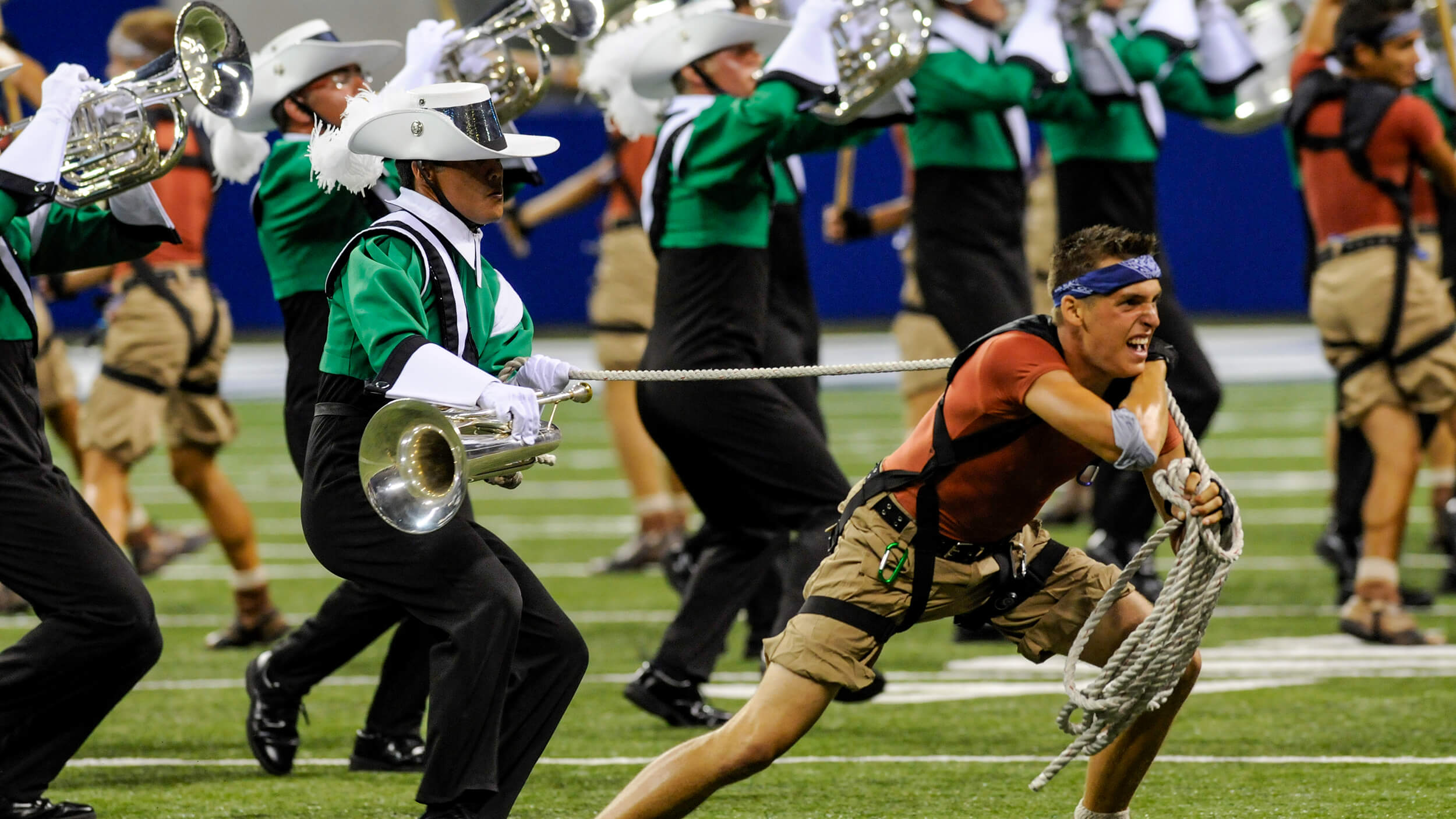 For the first time in The Cavaliers’ 61-year history, in 2009, corps founder Don Warren wasn’t serving as the organization’s president, having retired after the corps’ milestone anniversary the year before. Cavaliers entered the new era of leadership with “The Great Divide,” a show staff members said could be thought of as existing on multiple levels at once; as a metaphor for getting through life’s obstacles, as a literal exercise about spanning great physical chasms of canyons, and as a pure production in the classic symphonic style the corps popularized in the mid-to-late 1980s and through much of the 1990s.

Watch the 2009 Cavaliers' "The Great Divide" on DVD

Kaleidoscopic drill evolutions added to the return of the distinctive Cavaliers style, with much of the show invested in the building of tension that was only released once it could build no longer. Numerous references to rappelling canyons and climbing peaks were witnessed throughout the show.

Based on John Adams’ “Grand Pianola Music,” the corps titled its opening segment, “Echo Fanfare,” representing a melody reverberating off a distant cliff. Setting the theme, color guard members were attired as mountain climbers, wearing climbing harnesses, one attached by a rope to a member of the horn line, letting out slack as he descended into the canyon and others attached to each other.

The fanfare led into “The Descent,” based on Alberto Ginestera’s “Impetuosamente,” the second movement from his 1954 “Pampeana No 3,” originally written for full orchestra to convey his vision of the vast Argentinian prairie known as the pampa. Ginestera studied with Aaron Copland and was influenced by Copland’s utilization of national folk melodies in his work, transferring that concept to the music of South America. The movement ended with the horn line forming three peaks of a mountain range, with the drums as the snowcapped peak of the highest mount.

Another brief segment from the Adams work featured the intoning of a shofar, a ram’s horn used in ancient Jewish religious ceremonies, followed by the echoing sound of someone yelling, “Hello!” across the deep chasm of a canyon. After that short introduction, the hikers were led into the resonant depths of “Cathedral Canyon,” based on Claude Debussy’s 1910 “Engulfed Cathedral,” (sometimes known as “The Submerged Cathedral”), from the French impressionist’s first book of piano preludes.

Based on a legend of a cathedral on the lost island of Ys off the Breton coast of western France, the cathedral was said to rise out of the sea on certain days, allowing people on the Breton coast to hear the sounds of worship from within the risen edifice. Some guard members held onto a circular rope for stability as the music picked up intensity. 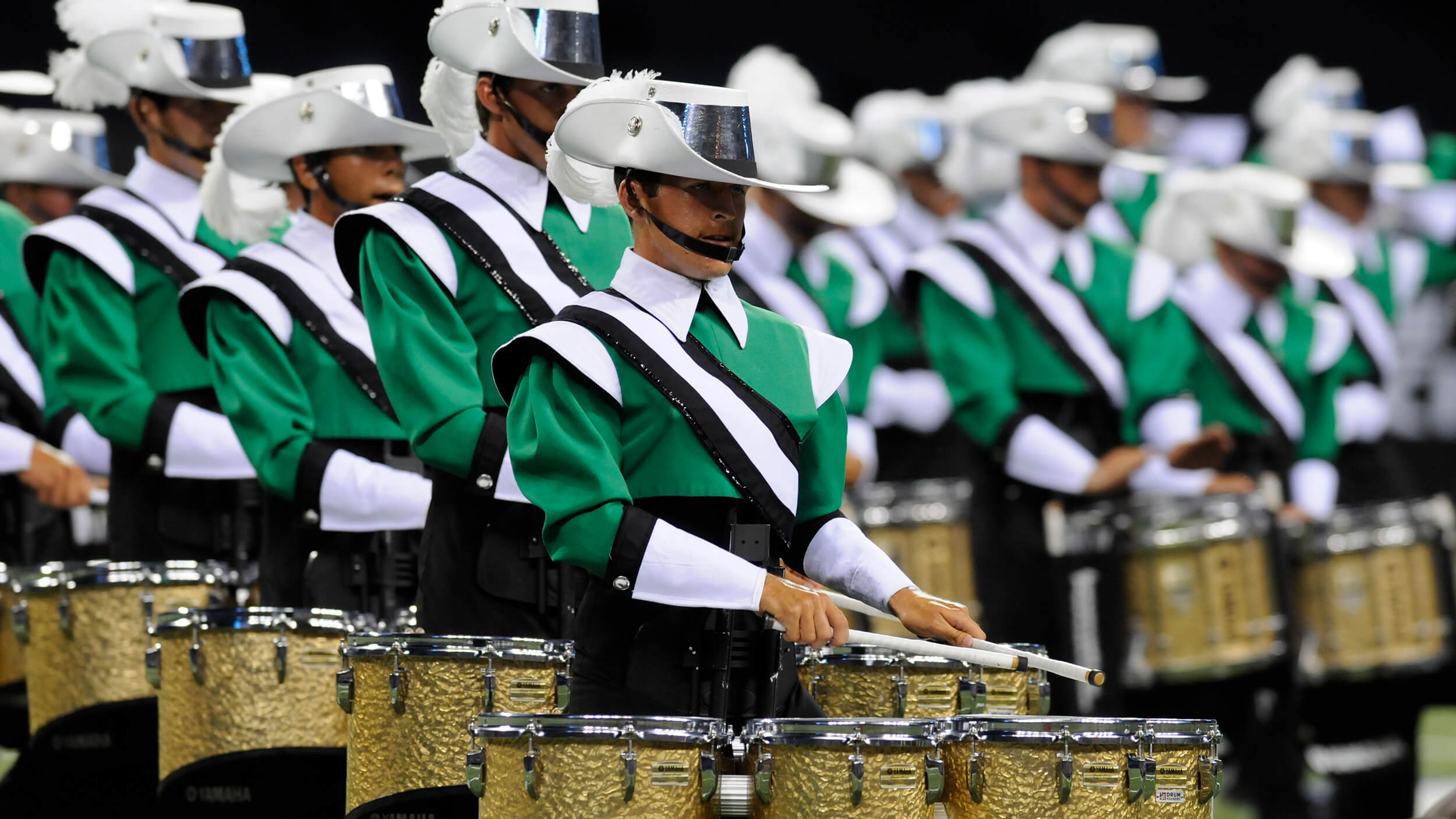 Johan de Meij’s “Extreme Makeover” was written in 2004 and based on Peter I. Tchaikovsky‘s 1871 “Andante cantabile,” the second movement of his “String Quartet No. 1 in D,” which itself was based on a Russian folksong. As in de Meij’s work, some Cavaliers members blew into bottles tuned to specific notes by how much water was in each vessel.

The shouted question, “Is anybody in there?,” was answered with a resounding, “No!” Primarily a percussion feature, the brass had a few interruptions of pointed percussive chords, followed by the front ensemble alluding to the prior Ginastera work. This movement ended with a lone color guard member ascending a pole held aloft by other performers and pumping his fist in victory for having made it to the top of the ascent.

Another John Adams piece, “On the Dominant Divide,” was heard during the segment titled, “Extreme Ascent,” the third section of his 1981 “Grand Pianola Music.” Adams based the piece on a dream he had about limos on an interstate highway turning into large grand pianos and firing off volleys of notes. That cacophony reminded him of the “sonic blur of 20 or more pianos playing different works” while walking down the hallways of the practice rooms of the San Francisco Conservatory of Music.

A return to the finale of “Extreme Makeover” witnessed one color guard member ascend a craggy mountainous stretch by climbing over the backs of stationary brass players, with abstracted flags of purple mountains majesty filling the front of the field.

At the end of the show, a corps member planted a flag in the corps’ traditional green, white, and black stripes atop the peak of a mountaintop formed by the horns. This final segment titled, “Endless Horizon,” represented the human conquest of natural elements while achieving a victory of personal endeavor.