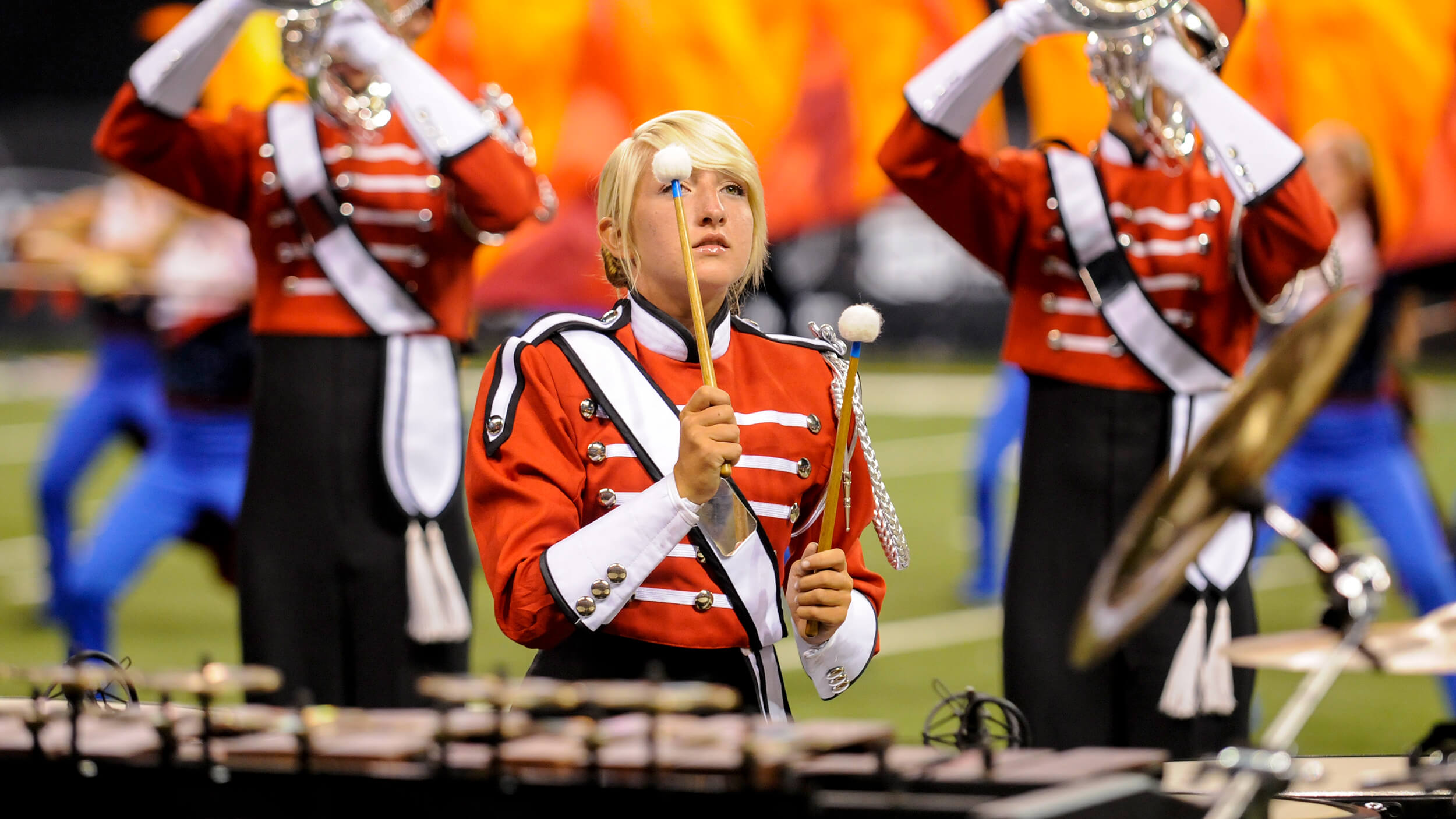 The 2011 Drum Corps International Tour started with Carolina Crown topping three corps that would finish the season ahead of the eventual fourth-place corps. At that first show, The Cavaliers finished second, then went on a 22-show win streak before ending the season in third, under the Blue Devils and Cadets.

Boston Crusaders finished their season in eighth place with “Revolution,” exploring the songs of “Les Misérables,” the 1980 Broadway musical based on the 1862 novel of the same name by Frenchman Victor Hugo. Set in the early 1800s, the musical recounted the story of French peasant and escaped convict Jean Valjean as he attempted to begin a new life while being relentlessly chased by a lawman.

The creative staff conceived “Revolution” to be as much about upheaval in the arts as the political landscape referenced in the music. For example, the color guard started the show in traditional French uniforms, and over the course of the show progressed to wearing contemporary attire.

The show started with a lone trumpet player crossing the front of the field while whistling the theme of “Do You Hear the People Sing,” heard in Act I of the musical and also the grand finale of Act II. The entire corps picked up on his whistling by humming the melody before singing the main verse from the piece.

The singing led into “I Dreamed a Dream,” with the brass section moving into a company front just behind the front ensemble percussion section. As the horns blared the melody, a sea of red, orange, and yellow flags suggesting a blazing inferno popped up across the field.

“The Attack on Rue Plumet,” the next-to-last piece in Act I, referenced the Parisian street upon which sat a house important to the musical’s storyline. Quite frenzied and extremely segmented in Boston’s drill formations, the visual staging enhanced the sense that various sections of the corps were fighting each other. Unforgivingly violent, the percussive drive of the piece ended with a circular block of horns surrounding a long flag waving proudly above the field, akin to what theatergoers see in the musical when another flag, all red to represent the blood of the martyrs, is waved as a symbol of the people’s resolve. 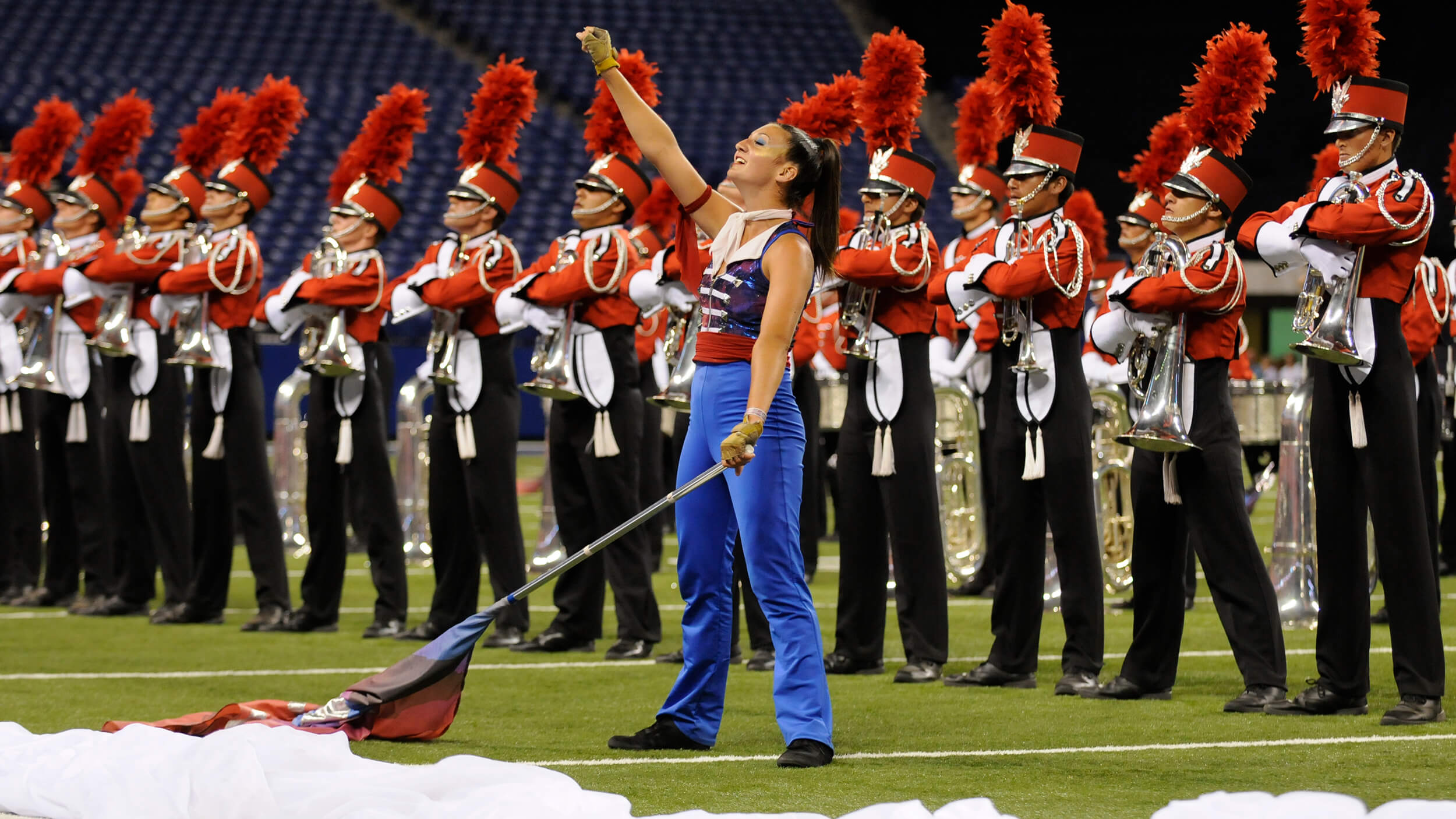 A short quote of the chorale from the beginning of Tchaikovsky’s “1812 Overture” introduced the lovely ballad of “On My Own,” the second song of Act II sung by Éponine, a poverty-stricken woman later killed during the uprising. More hints of “1812” were heard in the lower brass and mallet instruments as the horns and color guard gathered at the right side of the field, with the battery percussion moving off to the far left of the field.

After playing to the back of the field, the brass turned around and knelt as all flags in the end zone turned solid white, symbolizing the peace that Éponine and others found in death that they couldn’t find in life.

The following drum solo included various themes from “1812,” including the motif recognized from the 1960s Quaker Puffed Wheat Cereal commercials to represent “The cereal that’s shot from guns.” Tchaikovsky’s use of the Russian folk song, “U Vorot, Vorot (At the Gate, at my Gate)” highlighted the will of the Russian people in the advance of the invading forces of Napoleon Bonaparte, further referencing the violence of battle. By the end of the selection, the drums and much of the horn line framed the entire field.

The musical’s character Jean Valjean sang the tender prayer, “Bring Him Home,” during Act II as he asked for the safe return of Marius Pontmercy, a young student caught up in the revolution. Starting with mallets and a lone baritone player soon joined by two tubas and two other baritones, the soulful ballad witnessed a giant white scrim that enveloped the ensemble and a few other performers, alluding to a heaven awaiting the martyrs.

Originally sung as the final song in Act I during the dawn of the revolution, and also appearing at the end of the musical, the closer of “One Day More” contained hints of various “1812” themes, with bright flags of hues of white, pink, and blue enlightening the proceedings with hope for a better tomorrow.

Pushing toward the heroic conclusion, the brass players formed a company front for the finale of “1812,” compete with the sound of ringing church bells and bass drums replicating cannon fire. The show ended with color guard members raising their fists in a sign of victory, finally able to relish the result of their hard-fought battle for freedom.