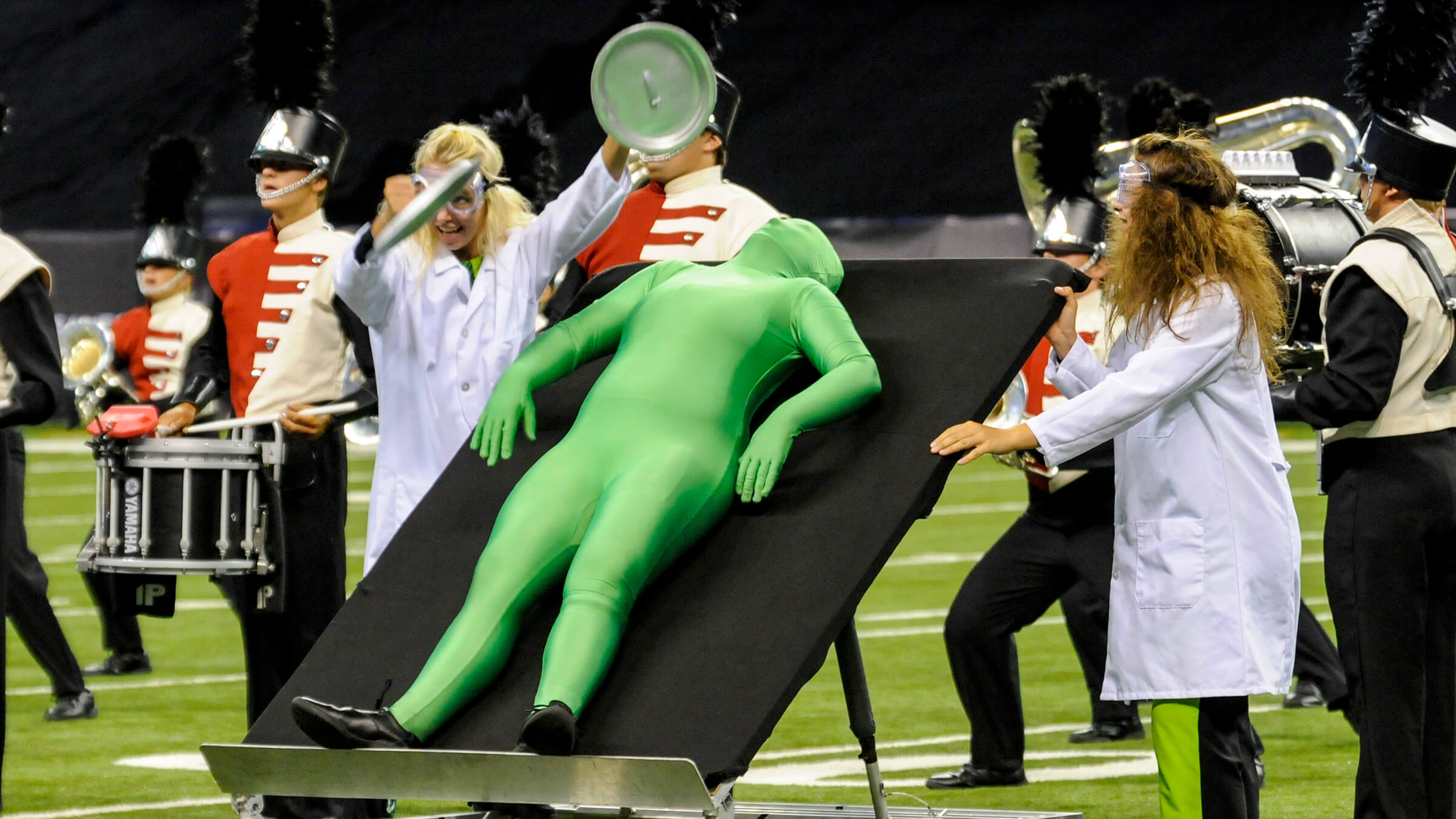 The start of the 2012 40th anniversary Drum Corps International World Championships happened a day late when torrential rainstorms plagued the Open Class Prelims in Michigan City, Indiana. Only two corps took the field before the storms started, so all Open Class corps were rescheduled to perform during the Finals competition the following day.

Among 2012’s Open Class corps, Oregon Crusaders won the awards for Best Brass Performance, Best Visual Performance, and Best General Effect for its production “Dreaming in Color,” topping Blue Devils B by just under a point and a half. The Devils’ “Ecstatic Waters” show earned the award for Best Percussion Performance, followed by the Vanguard Cadets who finished just five hundredths of a point behind Blue Devils B.

The 12th place Colt Cadets performed a show titled, “Alive!,” a story of the quest for acceptance disguised as a show about loveable monsters created in a laboratory.

Each of the five “creatures,” played by the corps’ cymbal line, was clad in a head-to-toe body suit of one of five different primary colors. Each monster, never breaking character, tried to engage corps members throughout the production. It became apparent that they wanted to become members of the corps, but weren’t too successful in achieving that as the rest of the corps members found them to be weird and unusual.

Rebar Clark’s “Escape from Chronopolis,” a then-recent work for concert band utilizing percussion to emulate sounds of timepieces served as the corps’ opener. Kicking things off, the five monsters were covered by black fabric while lying atop slanted laboratory tables, surrounded by the entire color guard dressed as mad scientists wearing protective goggles and long white lab coats over their black and neon green costuming.

During the introduction of the piece, which consisted primarily of the percussion re-creating the sounds of the timepieces, the mad scientists unveiled each of the monsters. When the covers came off, the audience was introduced to the five creatures, colored in either solid orange, blue, red, green, or purple. 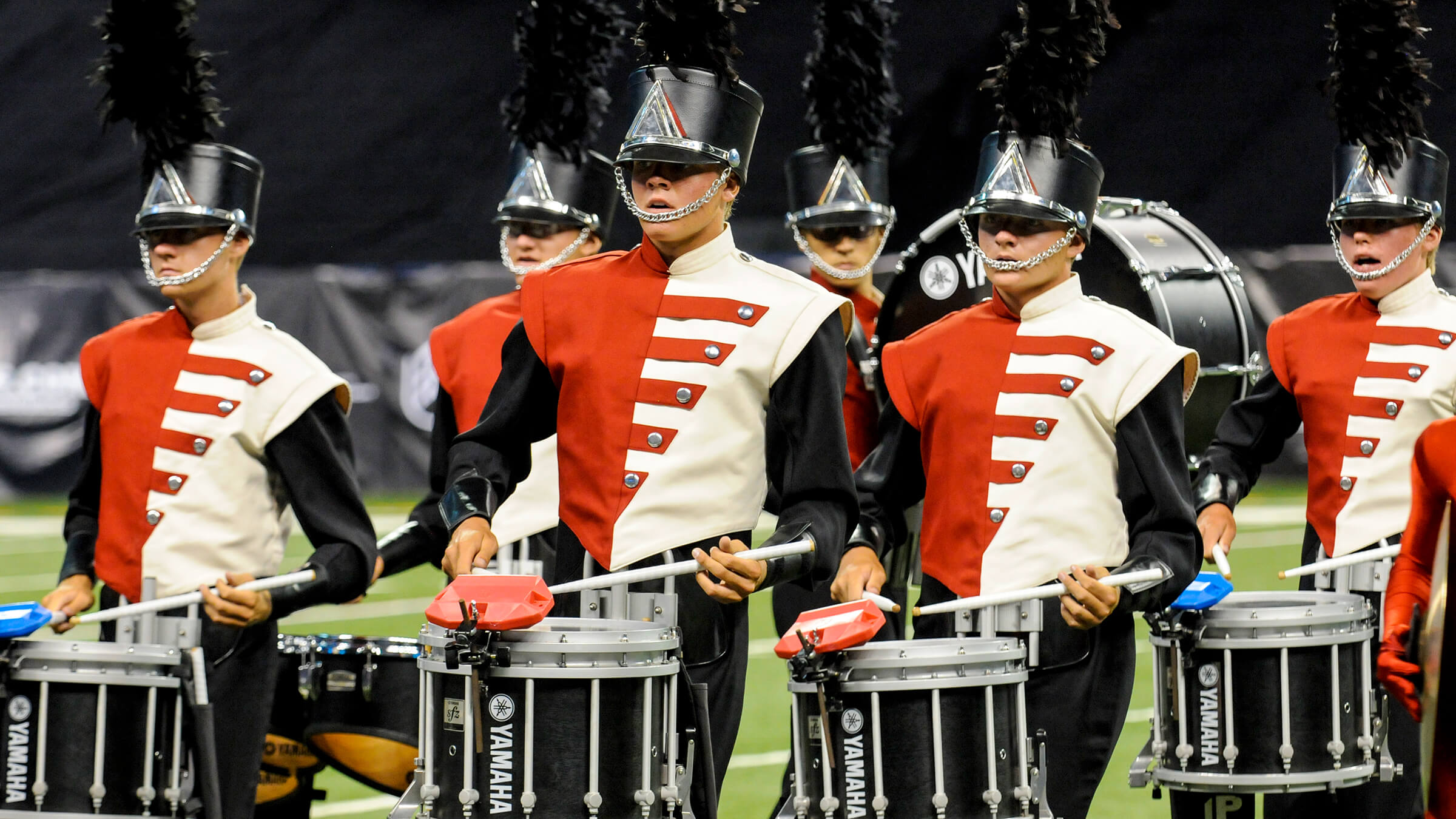 The orange monster kicked off the music by stealing a piece of color guard equipment, and the purple monster made its way into the brass line to try to steal a shako, but was rebuffed. The green monster stole a gong mallet and ran into the front ensemble to create some musical havoc, and the blue monster was the happiest of all, just dancing around.

As the monsters continued to project their individual characteristics, the corps launched into “Theme from ‘Van Helsing’” by film composer Alan Silvestri, who wrote for big screen hits as diverse as “The Abyss” and “The Avengers.” “Van Helsing” is a 2004 horror film starring Hugh Jackman as a vampire hunter and was inspired by the story of Dracula. Each of the monsters at this point climbed atop the risers that earlier had served as the laboratory tables.

One of Ludwig van Beethoven’s best-known compositions is the “Adagio cantabile” movement of his 1798 “Piano Sonata No. 8, Sonata Pathétique.” This melody was played on the field as a baritone and mellophone duet. During this tender selection, the monsters, without their cymbals, interacted with members of the color guard as they slowly gained acceptance.

The red monster was presented with an overlay looking like the jackets worn by the rest of the corps. After a brief dance between that monster and the guard member who presented the uniform, the monster also obtained a plumed shako.

Frank Wildhorn and Leslie Bricusse wrote the closing selection “Façade” for the 1990 Broadway musical “Jekyll and Hyde.” Each of the monsters was now wearing a corps jacket and shako with plume, representing the other members of the corps now accepting them as one of their own.

The monsters ended the show marching in formation, fully integrated into the corps and the hearts of their fellow corps members.