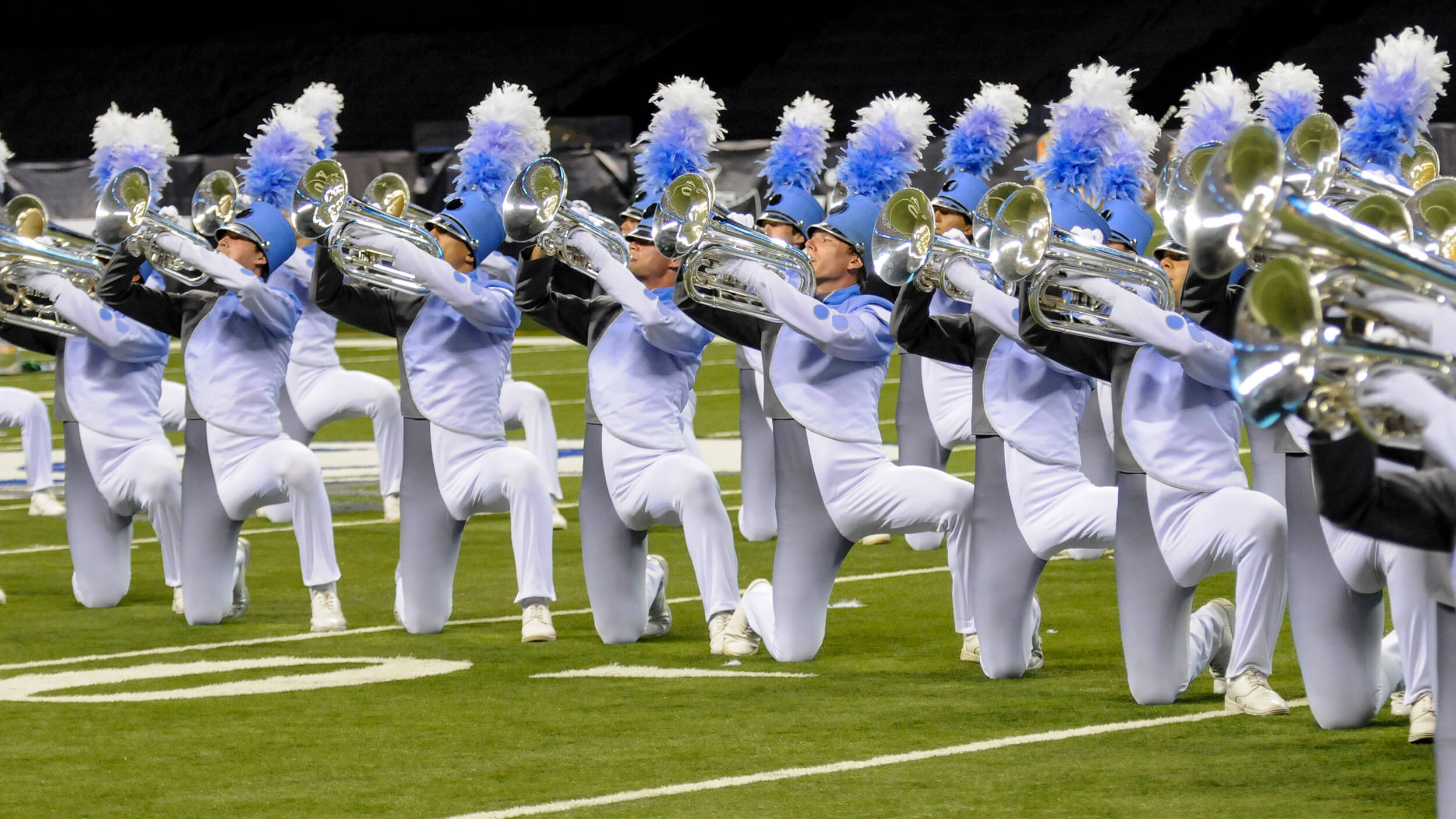 During Drum Corps International World Championships Week in 2015, Blue Devils had to overcome a few setbacks before going home with the corps’ 17th championship trophy.

A half a point penalty for a warm-up violation placed the California corps fourth in Prelims, but even without the penalty, the Devils would have scored 0.625 points under Carolina Crown. By Semifinals, the spread between the two corps was only 0.15, and in Finals, Blue Devils’ “Ink” production topped Crown’s “Inferno” by 0.575.

Bluecoats’ third-place “Kinetic Noise” took advances in on-field sound engineering to a new level, followed by The Cadets’ “The Power of Ten,” during which the corps turned all on-field markers to 10-yard lines.

Ultimately finishing in sixth place, Blue Knights presented “Because…,” a somewhat erudite program that relished in taking time to slowly exhale and wrap the audience in a cuddly warm blanket of sonic tranquility. During the early conception phase of the show, each member of the corps’ design team was asked to bring in music they found to be personally inspirational. The show music was then selected for each work’s ability to inspire the kind of wonder and curiosity the staff members enjoyed as children.

Numerous mirrors, added during the course of the season, assisted in conveying the theme of personal reflection. According to Blue Knights executive director Mark Arnold, “At first there were going to be no props, and then the mirror idea came up … almost like the anti-prop prop. We didn’t try to take away from the music with the prop.”

The show opened with “Because” by John Lennon and Paul McCartney, off The Beatles’ 1969 “Abbey Road” album, the last of the band’s albums to feature all four of its members. “Because” is one of the few Beatles songs to feature the Moog synthesizer, which was introduced five years earlier. Lennon stated the resemblance of the arpeggio accompaniment to the first movement of Beethoven’s “Moonlight Sonata” was intentional, a work that was referenced the following year in Blue Knights’ 2016 production. 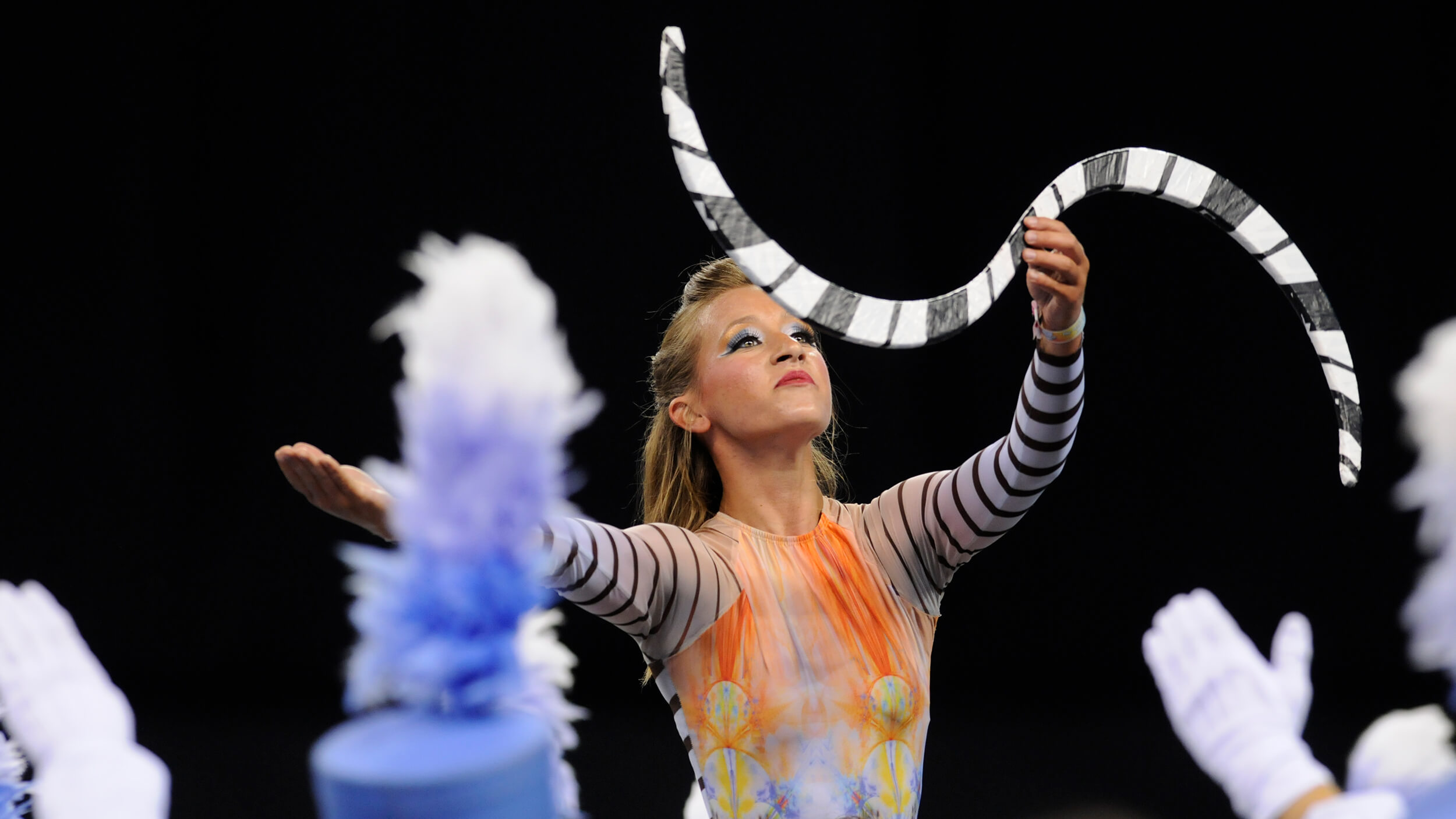 Brass players casually walked to the center of the field from the front left, slowly introducing the melody in an extremely deconstructed manner. Color guard flags sequentially appeared from behind the multitudes of mirrors arced around the sides and back of the field, leading into “Rush” by corps arrangers Jay Bocook, Kevin Shah, and Mike Jackson. If the mirrors were anti-props, this selection was the anti-“Because” as it was frenetic in a traditional drum corps sense and was not at all reflective in nature.

A lone baritone next introduced the plaintive melody of Regina Spektor’s 2006 “Après Moi,” before being joined by other voices equally melancholy in demeanor. This led into a rambunctious drum break that introduced an in-your-face segment that turned the tables upside-down, with the color guard performers twirling curved S-shaped equipment that sliced through the air like a hot knife through butter.

Following, the corps performed “I’m Alive” from Adam Watts’ 2013 “Life on Earth” folk album. Watts had a connection to the Blue Knights having marched in instructor Mike Jackson’s Mission Viejo (California) High School drum line in the early 1990s. He also wrote or produced music for a variety of Walt Disney productions, including “The Chronicles of Narnia,” “Hannah Montana,” and assorted “High School Musical” soundtracks. “I’m Alive” seemed to be a heroic response to the angst that preceded, providing an uplifting agitation to the mounds of repose that had earlier taken the show into the realm of self-psychoanalysis.

The corps elevated the change in demeanor tenfold in a closing tag of Eric Whitacre’s “Fly to Paradise” from his 2012 musical, “Paradise Lost,” known to many for being adapted for the fourth incarnation of the composer’s famous worldwide Virtual Choir project, which blended more than 8000 vocal recordings from 101 countries. A plethora of vibrant colors popped up in the color guard flags, made all the happier by the images of flowers that were lightly emblazoned on the silks.

The music surged over the audience like a giant wave, and as suddenly as it ebbed, the brass and percussion sections disappeared from view, leaving only the guard on the field.

A new ending added the weekend prior to the DCI Eastern Classic in Allentown, Pennsylvania featured a clip of The Beatles namesake to the show with the lyrics, “Because the sky is blue, it makes me cry.” The show came full circle, assisted by the mirrors that seemed to offer a window into the collective souls of everyone on the field and in the stands.