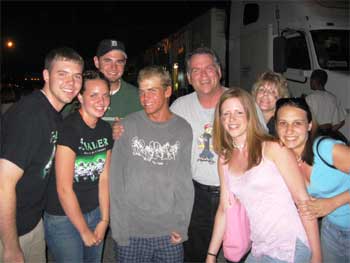 Hey all you people who just finished marching this summer! We're running out of Forzato pics! Hurry up and e-mail your best shots from the summer to dave@dci.org along with where and when the photo was taken. Send some biographical information about yourself as well. We'll give you full credit. Also, let us know if you want your e-mail address included. Richard Peters sent in this one. "What's this? Cavalier fans congratulating a Phantom Regiment member after a regional! "Attached is an "afterglow" picture from the DCI Midwest regional at the RCA Dome, downtown Indianapolis. Three past/current Plymouth-Canton marching band members (Mat, Laura and Zack - left three) met after the regional in the parking lot next to a Phantom Regiment semitruck to congratulate first-year marcher Kyle Peters (center), a Phantom Regiment lead part mellophone player, on a great show. All four of them had marched with Kyle over the years, at this point only Kyle has become a member of DCI. The marchers were talking about the RCA Dome "turf," marching technique, grueling practices and horn snaps -- what else do marchers talk about anyway? Of course Dad, Mom, sister Kate and friend (right four) were excited about the great performances that we saw that night at our first DCI regional! "Kyle lives in Canton, Mich., and was accepted (17 at the time) as a third-part trumpet player. Through a series of injuries (his and other members), Kyle ended up with the lead part mellophone assignment. At first he was hesitant to learn a new drill spot and the mellophone music -- but he adapted quickly, but still misses the trumpet section. For parents it looks odd to see him playing a different instrument -- but if that means he's on the field, what more could you ask for?" Thanks Richard!