Name, age, hometown: Brandon Scott Rogers, 19, Naperville, Ill. What corps are you in and what is your role this summer? I am marching mellophone and this is my second year with the Colts. Give us your full drum corps/marching music background. I marched at Naperville Central High School for four years while I was there. I auditioned for the Cavaliers my junior and senior year but decided that, in the end, Cavies wasn't the place for me. So I came to the Colts in January of 2004, auditioned on trumpet and got a contract. 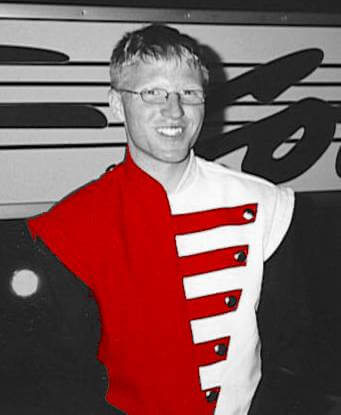 Brandon Rogers
How did you decide to be a member of your corps? My former band director (now a really close friend). His wife marched in the Colts color guard and aged out in '97. What first attracted you to the drum corps activity? DJ Alstadt, my former band director, marched Cavaliers from '92 to '94 and Cadets from '96 to '98. The summer between my freshman and sophomore year in high school, he took a busload of us to the Cavalcade of Brass show. From that point on I was hooked! What advice would you give to young people who want to march? Go all out! Just take that first step of going to a camp. It seriously changes everything. I auditioned for two years and kept getting cut, but I finally found my home with the Colts. There is a corps out there for everybody. People are all different and so is each corps. Just take the time, practice your butt off and go into your auditions prepared and confident! Do you have any favorite road anecdotes? Thinking back to this past summer, there are just too many events that happened. To pick out one specifically would take days to sort out in my head! The last good book I read: "Survivor" by Chuck Palahniuk (I have yet to read anything by Palahniuk that I haven't liked). The last great film I saw: "Phantom of the Opera" (2004) Where I go to school and what I'm studying, if applicable: I am currently attending the College of DuPage in Glen Ellyn, Ill. I am just taking some general ed courses so that I can transfer to Western Illinois University in the fall. I am planning on majoring in music education. Jobs I have/have had: I currently hold two jobs. The first is at Potbelly Sandwich Works. I've been there for over two years now and I love it. The people are great, it's an extremely fun atmosphere and the food is exquisite. The second job is through an Amazon.com zShop. I work for my uncle who distributes CDs and DVDs throughout the country. Three albums I'd want on a deserted island: This is a really hard question! 1. John Mayer, "Any Given Thursday"
2. Dave Matthews Band, "Central Park Concert"
3. Drum Corps International 2004 World Championship Collection (Division 1) My favorite TV show: I don't watch much television but if I had to pick, I'd say that my favorite show is either "Everybody Loves Raymond" or "The Drew Carey Show." Favorite performers: Another hard question. I've seen some amazing performances, so I'll just list a few (in no particular order).

1. Guns 'n' Roses
2. Wynton Marsalis
3. Kenny Wayne Shepherd
4. B.B. King
5. Big Bad Voodoo Daddy How do you "blow off steam?" I play guitar or read a book What has been your formative drum corps moment? From an audience perspective: SCV 1999. From a performance standpoint: Marching with the Colts in 2004 at the Orlando show. Best drum corps show ever: EVER? I have so many favorites! So I'll pick my most recent favorite being Madison Scouts in 1995. What are you most looking forward to about the summer? I love being with my Colts family and all of us working so hard to accomplish an identical goal. The passion that every member of the corps all adds up to such an amazing experience that words really can't describe the feeling. Best thing about being in a drum corps: See above. Worst thing about being in a drum corps: If one person gets sick, the entire corps pretty much gets sick! During tour, the best part of the day is: Full ensemble. During tour, the worst part of the day is: Basics. Favorite drum corps personality and why: At the moment, Rick Morey is my absolute hero. The drill he has written for the Colts this year is simply amazing. So Rick, if you're reading this, thank you from mello 33! What I want to be when I "grow up": "Grow up?" I guess if I have to grow up, then I would really like to be a band director. Describe what you think a typical DCI show will look in 2015. I honestly don't know. It'll probably be just as amazing as it is now but, from talking to people who aged out quite some time ago, I'll probably have the same view/attitude that they have. The "well, back in my day ..." attitude. Haha! Feel free to add anything else you'd like. I would just like to say "thank you" to everybody who has supported me in my drum corps career. All of my family and friends and everybody who has sponsored me and allowed me to pursue this activity. Also, thanks to my Colts family who are and always will be there for me no matter what. I love you all from the bottom of my heart!