Name, age, hometown: Whitney Michele Stone, 19, Sylva, N.C. What corps are you in and what is your role this summer? Carolina Crown color guard. 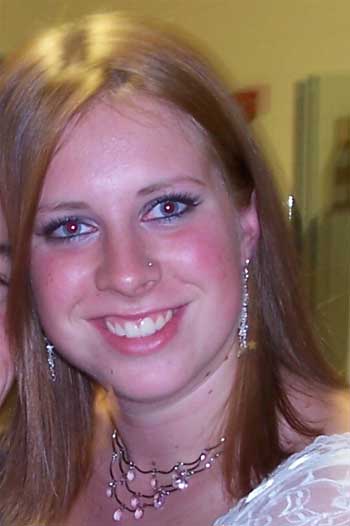 Whitney Stone
Give us your full drum corps/marching music background. I played flute from 6th through 12th grade, marched flute in 8th. I was in color and winter guard from sophomore through senior year (captain junior and senior) at Smoky Mountain H.S. I marched in the Crown color guard in 2003 and 2004, and in the Study IW winter guard in 2004 and 2005. I marched in the WCU marching band in 2003 and 2004, and was captain for 2005. How did you decide to be a member of your corps? Crown's booth was at a marching band competition my sophomore year and I picked up an information packet and tried out that year. I didn't march that year but my senior year I decided to go back and try out again and ended up marching. It's also the closest corps to me. What first attracted you to the drum corps activity? We went with marching band to the Sevierville, Tenn., show the summer before my sophomore and junior year. I thought it was so awesome! I remember it being very loud. What advice would you give to young people who want to march? Just go for it and be confident at auditions! If you don't make it the first time, don't give up and try again when you feel better prepared. Audition camps are a great way to learn. Do you have any favorite road anecdotes? There are way too many. The last good book I read: "Walking Across Egypt" by Clyde Edgerton The last great film I saw: "Drop Dead Gorgeous" (fave movie ever!) Where I go to school and what I'm studying: Western Carolina University, environmental health major and dance minor. Jobs I have/have had: Teaching guard at Smoky Mountain H.S. Three albums I'd want on a deserted island: "Aerosmith's Greatest Hits," a Postal Service CD, Evanescence, "Fallen" My favorite TV show: I don't really watch much TV. Favorite performers: Britney Spears, Veronica Steele, Ellen De Generes How do you "blow off steam?" Talk to Erin, my best tour friend, my mom, or listen to loud music on the bus at night. What has been your formative drum corps moment? Rosie Miller telling me I had a spot for 2003. What are you most looking forward to about the summer? Being an "Angel" and spending the whole summer with Erin and my other great friends! Best thing about being in a drum corps: Performing, of course, getting away from "real life," and getting tan and skinny! Worst thing about being in a drum corps: Being sunburned almost every day -- for me at least. Also, having to sleep on the bus with someone else in the seat, impossible for me. Coming back from tour and not really having anyone that really understands what I just did all summer. During tour, the best part of the day is: Shower! During tour, the worst part of the day is: Rushing like crazy during eat, shower and load. Favorite drum corps personality and why: Rosie Miller, Michael and Katie Townsend and Jenny Ross. They are all amazing at what they do and I look up to them so much! They are my color guard idols! They make it enjoyable. What I want to be when I "grow up": Teaching guard and dance, maybe doing something with environmental health, and being happy and married with adopted kids! Describe what you think a typical DCI show will look in 2015. More electronics, hopefully no woodwinds. Electric guitars maybe -- who knows what else!