Jeremy Logan, 20, is a junior music education major at Louisiana State University. He has marched for the past two years in the Cavaliers front ensemble and ages out in 2006. I asked him how his experiences in drum corps have helped or hindered him as a college music major, and how his corps experiences might help him in his future professional life. 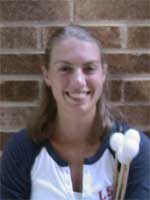