On May 8, 2008, Incognito Drum & Bugle Corps drew its first breath after passing the Drum Corps International participation review and becoming an Open Class corps. From Norwalk, Calif., the corps is the brainchild of composer, visual designer, percussion/brass instructor and corps director Tony T. Nguyen. Nguyen's vision not only included a corps, but an entire organization that would provide opportunities for young people in a variety of musical fields. How that happened was a bit of luck with a lot of careful planning. 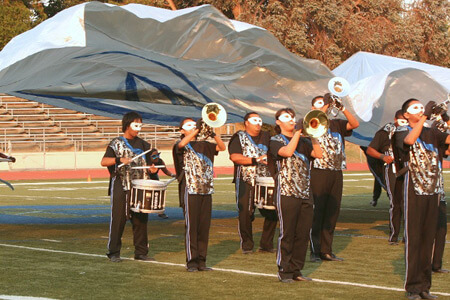 Incognito's inaugural season may have only lasted four weeks, but a strong showing on the field has solidified this new corps' bright future. Surprisingly still, they accomplished this with a one-day-a-week rehearsal schedule. These "weekend warriors" reached 52 members with an average age of 17 years old (14-21). And they already boast a corps motto and instilled traditions. Take for example that everyone in the organization – from director and staff to corps members – have adopted "incognito" names. Here is a deeper look into the world of these "Incognitians" as explained by Tony T. Nguyen, otherwise known as Incognitus.
How did the corps come about? In 2005, Incognito debuted an ensemble that competed in the indoor percussion circuit. I teach at various high schools in southern California. Over the years, many people still wanted to perform but couldn't because of different reasons. When we started Incognito Drumline, I marched with them on the floor. I thought it would be a great thing to march with my kids and for them to be able to see that I can still march and play. I like to show them I will do what I teach to set an example. In 2006 I put brass on the court indoors and everyone was really excited. So that year I told them, "Five years from now, we will compete in Drum Corps International competitions." 2008 rolled around, Incognito Winter Guard debuted during the indoor winter guard season. And on May 8th, 2008, Incognito Drum and Bugle Corps was approved. This happened in two years instead of five years. I am amazed to this day how it all happened.
How was the name chosen? I've been teaching for more than a decade and noticed many people talked about how groups can only do well if they have the "name" or a well-known status. That is true in many cases, but I felt that most people didn't give others a chance, and before anyone hit the competitive arena, they were prejudged. We focus on the music and performance. We didn't want people to look at the individuals, we rather wanted them to sit back and listen to the music. Our motto for Incognito Drumline: "It's not about who's playing, it's all about the music." For Incognito Winter Guard, "It's not about who's on the floor, it's all about the performance." For Incognito Drum and Bugle Corps, "It's not about who's on the field, it's all about the performance." All of our groups wear masks when performing to show that we are one and it doesn't matter who is in the group. 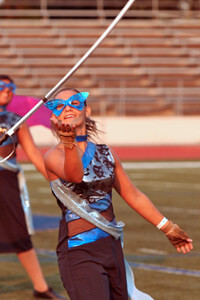 What is Incognito's 2008 show and music? "World of Incognitians." It's all original music from the mind of Incognitus. I've been writing music and drill for many Southern California high schools and with The Music Life Foundation, I teach a composition program. I want to set an example for my members to show that anything is possible if you try and pursue your dreams.
How many members are part of the corps? There are 52 members. Out of the entire 52 members, no one has ever marched in a drum corps.
How did most of them discover this activity? Seeing it live at the Rose Bowl or through videos.
What was your main goal this season? To earn respect from drum corps fans and share with people that with opportunities, anything can happen if you desire it.
Do you think you've achieved it? I don't know if we have achieved it. What I do know is that I am very fortunate to have such a great group of members in the corps and to have a great staff to help make this possible. As for respect for the community, I can only go with what other corps directors have been saying. Some say that for us to score in the 50s our first time out is really good. Some say that if we beat a corps that it is great. Some say if the scores keep going up, it is a great thing. I am just glad that we are at least competitive in our inaugural season.
Does your corps lean toward any certain style of music? This is a very good question. I am not sure if we have a style just quite yet. Our goal is to show versatility. 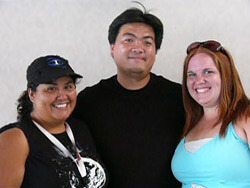 Enora (Color Guard Caption Head),
Incognitus (Director), and Veria (Drum Major)
As a first-year corps, do you have a corps song or any traditions yet? All members are required to have an "Incognito" name. The name can be something that existed from history, or they can make one up. No matter what it is, it has to have meaning. The rules are simple: All male names must end in "us" or "ius." Female names must end in "a" or "ia." So my Incognito name is Incognitus because I am the founder. If your hobby is drumming, your name could be "Drummus" or "Drummius." If you're a female and you love pirate stuff and music, your name could be "Arrria." The point is that we all have Incognito names because we are someone else during our performances and we function as a family. We would prefer not having people say, "Oh so and so is going to march with them, that means he or she is going to be good or suck wind." Plus it's really fun. How often do we get to be someone else or play a character?
As an example, here is the list of the corps' 2008 staff: Incognitus - Corps Director, Music Composer and Visual/Drill Designer Inconspicuous - Percussion Caption Head Enora - Guard Caption Head Maestrus - Brass/Visual Caption Head Rikognitus - Percussion Technician Sidius - Visual Technician Macius - Corps Consultant Fidensius - Music Consultant As for our shows, from year to year we will have masks and it will change depending on concept or theme. We are starting out this year with "World of Incognitians." Whatever our last set of the program will be, next year's opening set will start where we left off with that mask. Then through the show, we will transition into a new mask. Wherever we end that year, we will continue next season where we left off with those masks. Our story continues over years instead of just one season to promote tradition and to remind ourselves to never forget where we came from. I want members to remember their teachers that taught them how to play an instrument or how to spin a flag, and [they should] pass on the knowledge to future performers. We would not be here if someone didn't take the time to teach us. With this thought, we want to leave legacies whether it's on a tiny or grand scale.
What is the future of Incognito? The future is to earn the respect of the community and to be a World Class corps … to keep music alive in our communities and to leave legacies. We hope to do this with class and to stay humble. We want to represent this sport the best way we can.
How difficult was the process of putting a corps together? We have been really fortunate. Because I've been on staff with many local schools, the directors have helped a lot with recruiting and loaning instruments and locations to rehearse. Some of these directors were my directors in high school. I am now able to give back and show them how thankful I am with the time and education they gave me. As for the members, after a decade of teaching, [there is] a family of alumni who still loves music and support what I've taught. With their stories, they have recruited many people to join our team.

How has your support team (parents) been with the corps? We currently have about three or four parents that do a lot of things for the corps. They make sure we have transportation, nourishments and uniform detailing. The huge support team comes from the band directors. They really went out of there way to see Incognito through this season. Some directors were former corps members and knew how hard it was to start a corps and they volunteered their knowledge to us.
Finally, what part does the Music Life Foundation play in the corps existence? I officially founded the Music Life Foundation 2008 but the dream has been around since 2004. I wanted to have a place for kids to come to learn all aspects of music – composition, recording, making music videos, performance, and so on. Learning these aspects of music can cost a fortune to families and sometimes the kid misses out on the opportunities. I wanted to create a place where they can get that education early on so maybe we can help guide them in the right musical direction. We offer composition, recording, jazz, classical, marching, and many other programs. We have a performing indoor drum line and a winter guard. Now, we have the drum and bugle corps. We will have a jazz program next year. We are doing everything we can to make this happen to give kids opportunities. All staff members including myself are volunteers, with all membership and tour fees going back to the kids.
Photos by Francesca DeMello.