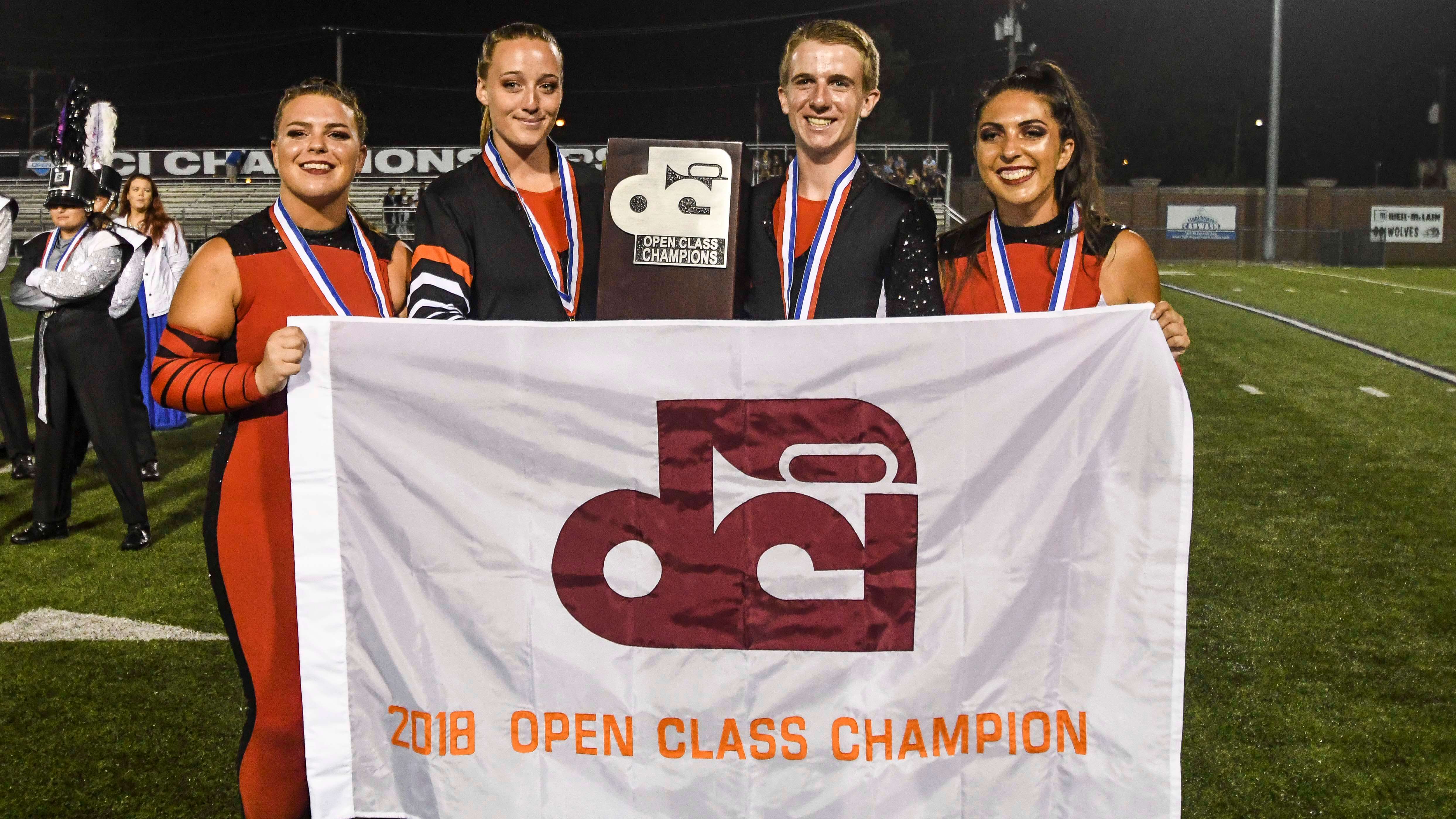 Vanguard Cadets opened up the 2018 season with a 3.15-point deficit to Blue Devils B, but, similarly to the corps’ gold medal-winning 2017 campaign, used a mid-July push to achieve glory.

“It’s fantastic, it’s very, very gratifying,” Vanguard Cadets program coordinator Rob Ripley said. “An enormous number of people put in a lot of work to give the members a show that they could really dig into and perform well. It’s very gratifying watching all of that work come to fruition.”

With their 2018 victory, the Vanguard Cadets became the first repeat Open Class champion since Blue Devils B went back-to-back-to-back between 2009 and 2011. The Santa Clara corps earned caption awards in general effect, brass and percussion.

“The staff never stopped pushing us,” Vanguard Cadets drum major Braydon Ross said. “They kept giving us new material, the corps members always pushing themselves, they were always driving forward. That’s what got us here.”

“I feel so amazing,” Blue Devils B drum major Oliver Bishop said. “Everybody just really put it out there tonight. We had the best run-through earlier during rehearsal and they just topped it again.” 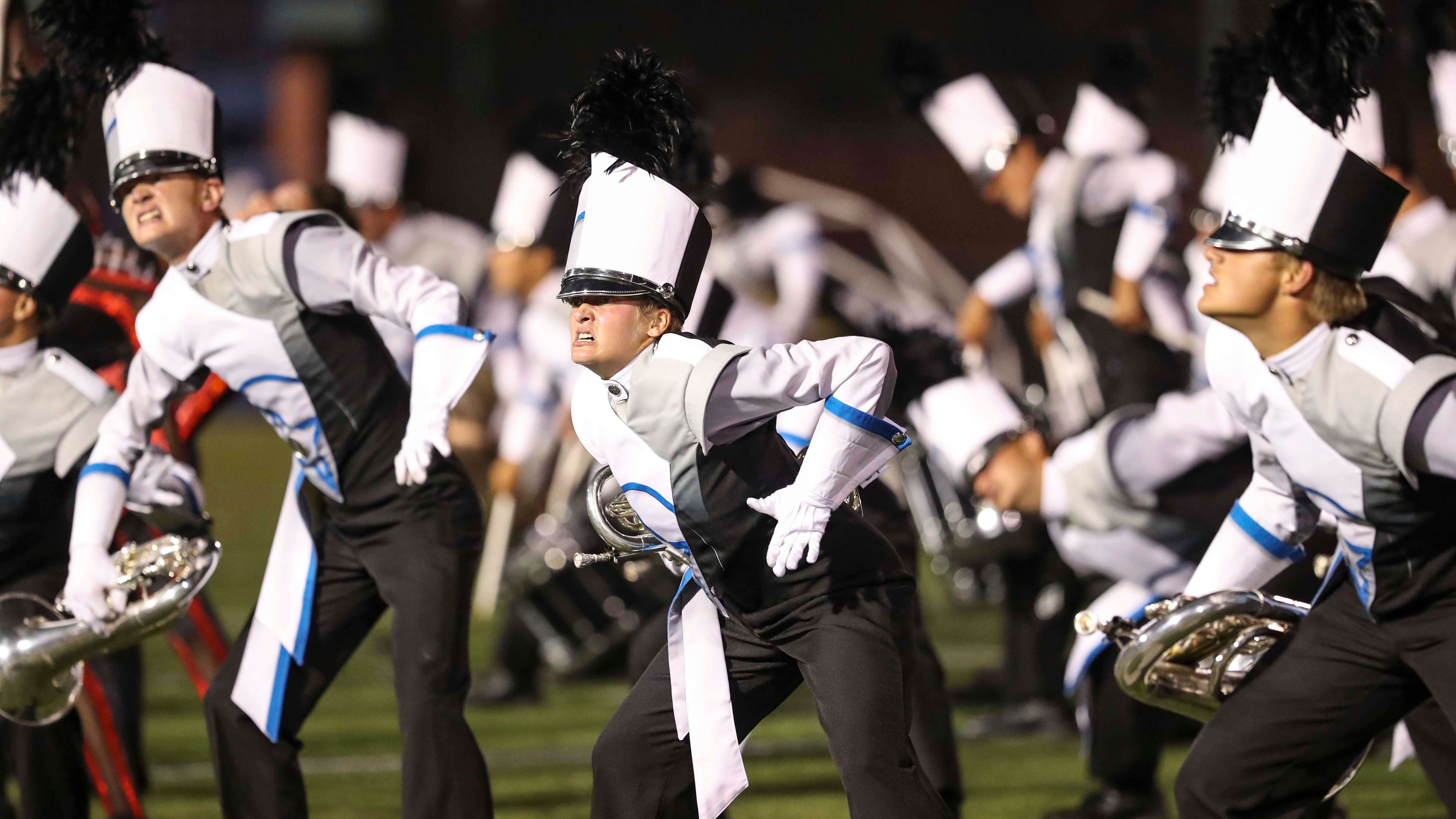 “I feel like I’m in a dream right now,” Gold drum major Tyler Pham said. “We can’t be looking back anymore, we can only be looking forward. The sky is the limit for us now.”

Despite finishing outside of the top three for the first time since 2015, members of Legends clinched their fourth top-five finish in as many years.

“It felt incredible,” Legends drum major Emily Thomas said. “They had such an energy going into it and it definitely carried out through the whole performance. It always feels incredible, especially since we are so close to Michigan, it does kind of feel like a home show. It feels like everybody’s here for us, and we’re getting all of that energy form the audience, it’s incredible.”

Spartans earned its third-straight fifth-place finish and made its ninth appearance in the top five since returning from an inactive 2009 season.

The Nashua, New Hampshire corps took second place in color guard and scored among the top three in total visual.

“That was awesome,” Spartans drum major Emily Dawson said. “I have never felt so great in my life. I could really sense the energy from them, too. So we definitely had a really, really good night tonight.” 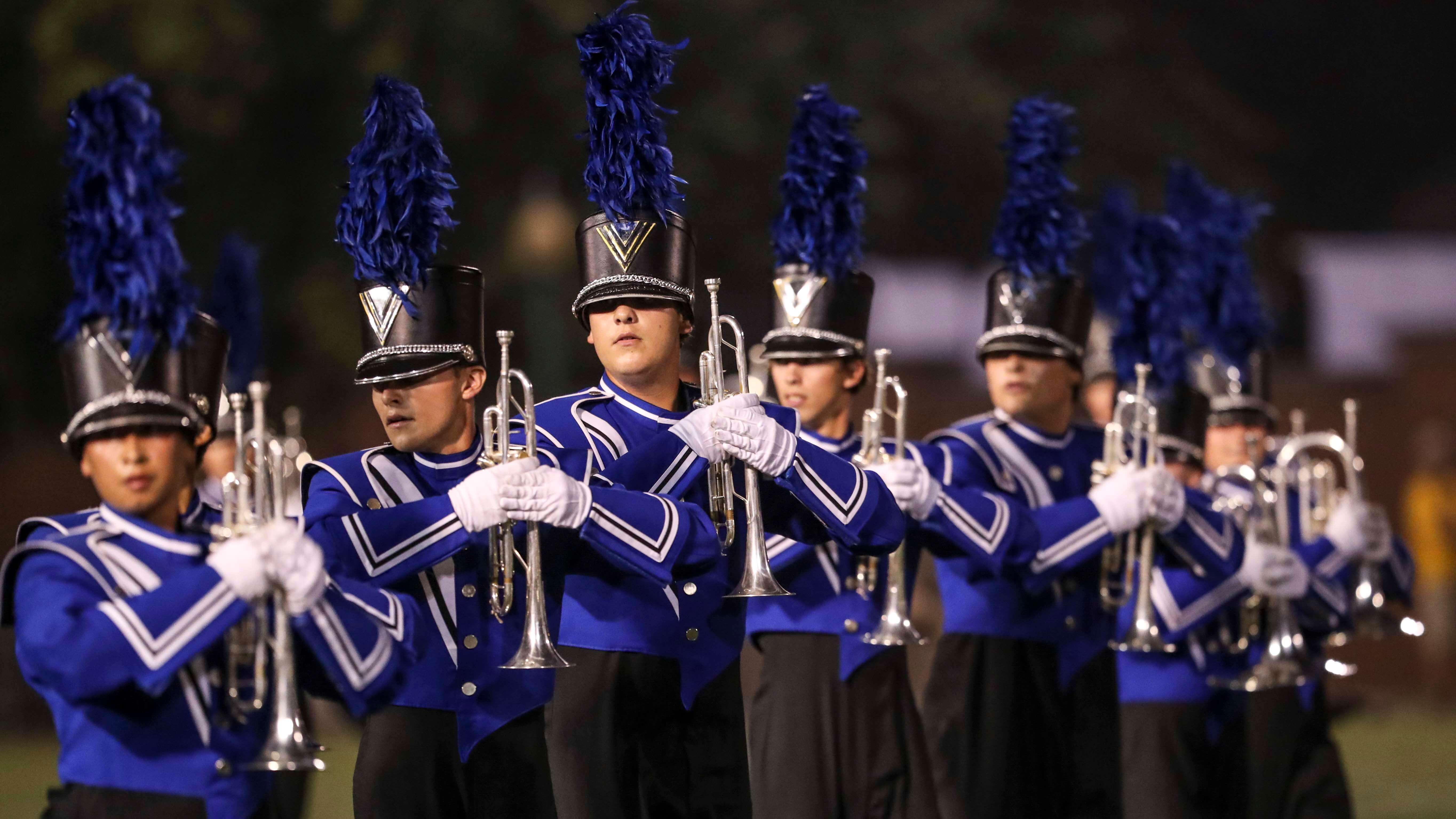 7th Regiment saw major improvement from 2017, jumping from eighth place into the top six, where it hadn’t finished since 2015. Despite trailing Guardians in total music, the Connecticut corps used impressive general effect scores to keep hold of sixth place.

“It was just incredible,” 7th Regiment drum major Leslie Abreu said. “We know that yesterday, we had a great run. We said, ‘We’re going to step it up, because we have nothing to lose.’ And we were so excited and pumped to get out here, and that’s what we just did, we laid it on the field.”

Guardians — which entered this season having never finished higher than 10th in its two trips to the Open Class DCI World Championships — leapfrogged River City Rhythm and Louisiana Stars into seventh place. The Houston corps used strong numbers in the music captions to reach new heights.

Tuesday night, the Guardians set a new record score, breaking 70 points for the first time in the corps’ five-year history. 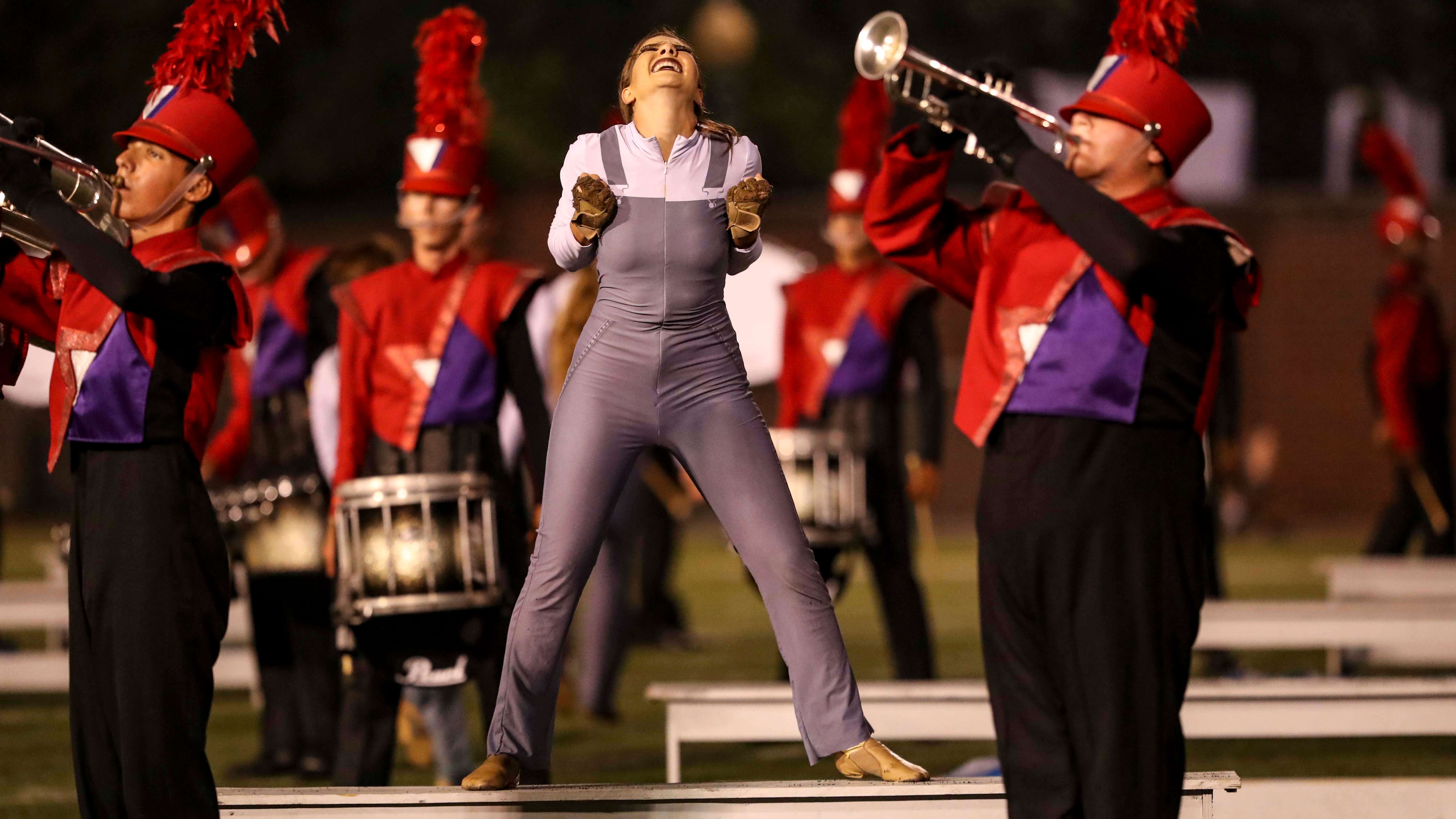 “That was one of our best of the season yet, just like we wanted,” Louisiana Stars drum major Thomas White said. “There was a lot of energy that we saw today that we didn’t really get yesterday. Everybody was really ready for this Finals performance.”

Despite having fallen one position from Monday’s prelims, River City Rhythm matched its best Open Class finish and cracked the top 10 for the first time since 2015.

“That was an incredible run, absolutely incredible,” River City Rhythm drum major Adam Shew said. “Our hornline was on top of it, our battery had an incredible lot warm-up, and it definitely transferred to the field. It was an absolutely energetic, incredible show.”

Southwind scored in the top 10 for the second time in as many years, having returned to the DCI World Championships in 2017 after a nine-year hiatus.

“I shed a few tears at the end, not going to lie,” Southwind drum major Kyra Moyer said. “It just feels so good to be here with our family, doing what we know how to do best, and that’s throw down.” 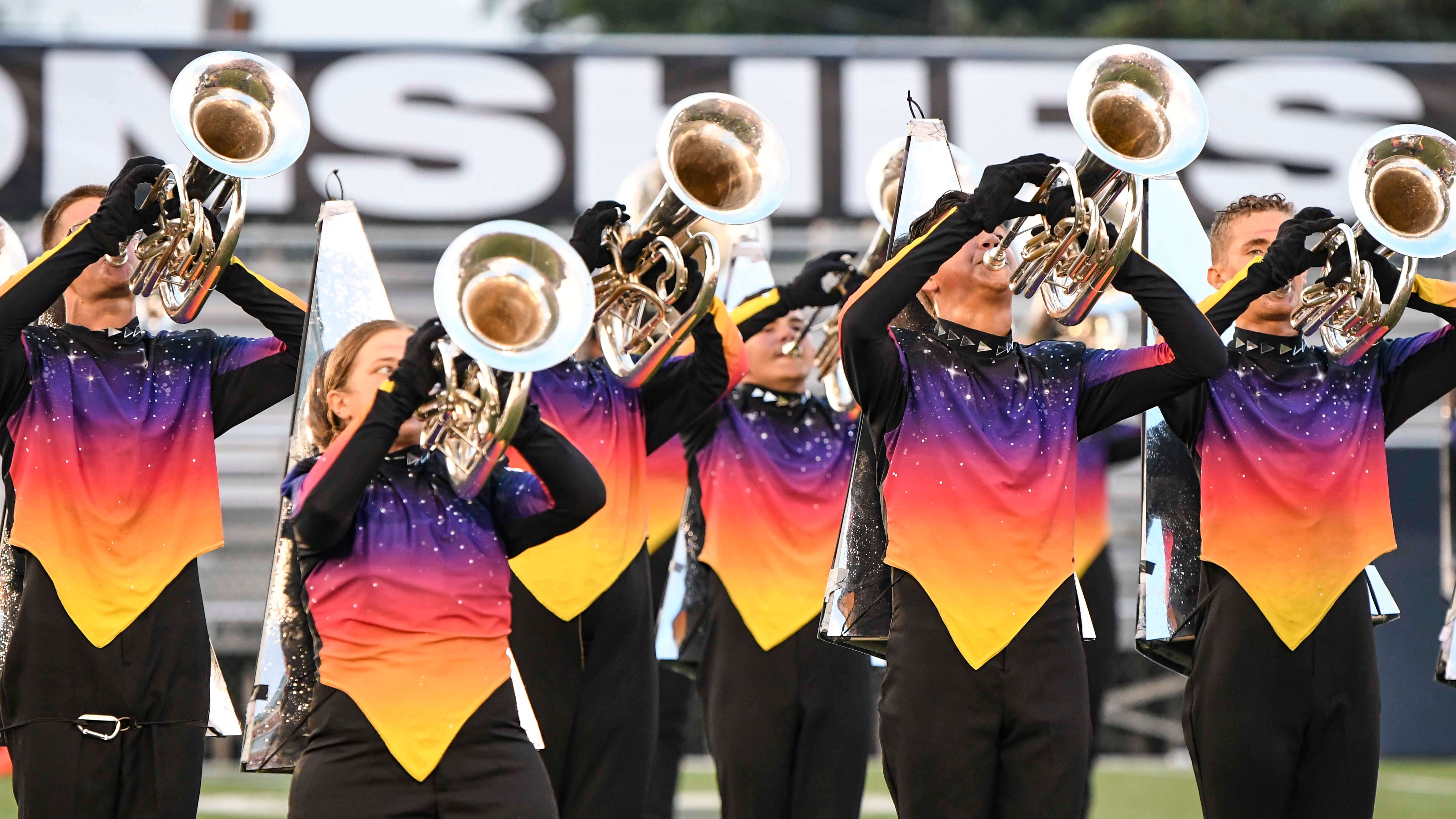 In its debut appearance at the DCI World Championships, Golden Empire earned a finalist position and scored as high as eighth in the percussion and color guard caption.

“There was fantastic energy on the field,” Golden Empire drum major Aaron Aragon said. “I’m super hyped for what happened; we just came from a thunderstorm, and all that energy, all that lightning was on the field tonight.”

Shadow, in its third year making the trip to Michigan City, broke through into the Top 12 after spending the past two seasons in 13th place. The corps’ 10th-place percussion score was a highpoint on the score sheets.

“We were all super excited, because this has been something that we’ve been working toward,” Shadow drum major Haley Hargrove said. “Finally making that push and getting into Finals was super awesome for us.” 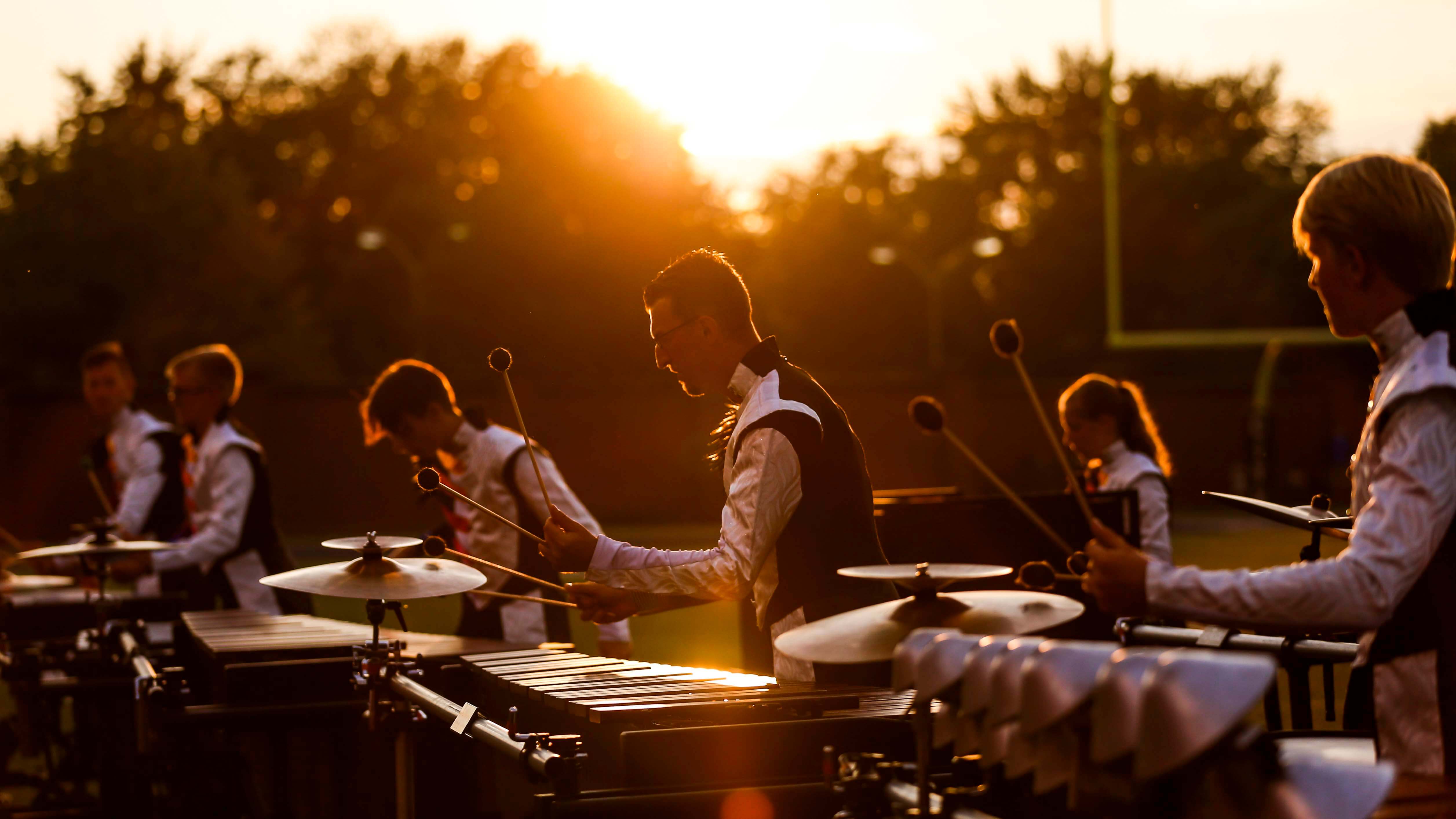 The 2018 International Class champion, Jubal outscored two of its Open Class counterparts, with impressive numbers in the visual captions.

“It was great,” Jubal drum major Viktor Van Maanen said. “We had a great run yesterday during Prelims, and I believe this was even better. It was awesome. The audience was amazing and we were really pumped for this show.”

All 13 corps from Tuesday night’s event will perform next at Lucas Oil Stadium in Indianapolis, the site of the DCI World Championships beginning Thursday, August 9.

View the full lineup for the DCI World Championship Prelims