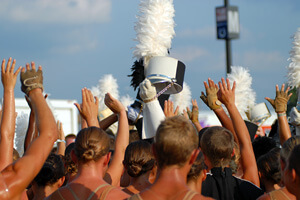 Are you too old to throw your hat in the ring in 2011?
I heart DCI so much! My 22nd birthday is coming up on June 3. Can I join a corps this year? Susana D. – Chicago, Illinois Fresh off the November elections and borrowing from everyone's favorite political line: Yes You Can! It's what corps members often call having a "bonus year," and you're among the lucky people who can march this season as one of those "seasoned" 22-year-old drum corps vets. Looking at the nitty-gritty details in the DCI Rules Manual, here's what it says: 1.0 ELIGIBILITY 1.1 – Drum and bugle corps composed of members not over 21 years of age shall be permitted to compete. Exception: Any member who turns 22 years of age on or after June 1 is eligible to march during that year. For you college students who stopped taking math classes in high school and are running out of fingers to count the days on, more simply, if you were born anywhere from June 1, 1989 to December 31, 1989, you're good to go in 2011. Use the age calculator at DCI.org/audition to see if you're eligible to march in 2011. Did you know that just over 15 years ago no 22-year-olds were allowed to march? Today's version of the age-eligibility rule has been on the books since 1995, and since then discussion on age limits has come up frequently. Last January a rule proposal that would allow all 22-year-olds to compete no matter when their birthday falls on the calendar (That'd make the math a little easier, huh?), was defeated in an 18 to 4 vote by DCI's member corps. Hear what was said in the discussion about that proposal in this video.