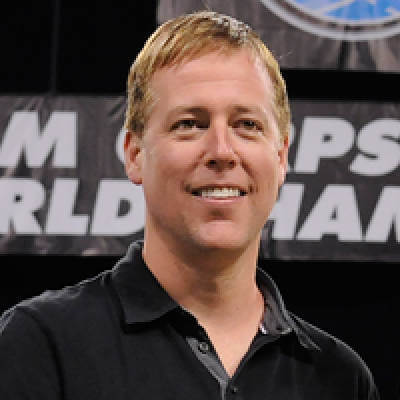 Fame greats as Len Piekarski and the late Steve Brubaker, Michael Gaines had some big shoes to fill when he first started writing the Cavaliers' drill formations while still in his 20s.

More than a decade on the job, he created a multitude of awe-inspiring visual effects on the football field that left drum corps fans on the edges of their seats asking in amazement, "How'd they do that?

"He truly is the 'Botticelli' of present day drill design," said Hall of Fame member James Elvord. "Single handedly, Michael has pushed all designers to explore the outer limits of sheer visual excitement. Michael's work mesmerizes the audience with its brilliant clarity and technical difficulty. No one writing today creates effects on this grand a scale."

Gaines was a member of the Cavaliers' color guard section from 1987 to 1990. Joining its staff the following year, he had his first taste of the drum corps design process writing choreography for the color guard. Lending his hand to parts of the drill design in both 1992 and 1993, it wasn't until the Cavaliers' 50th anniversary season in 1998 that Gaines took on the full responsibility of the corps' visual package.

Crafting the Green Machine's visual productions through 2011, Gaines made his mark while helping the corps achieve an unprecedented five World Championship titles in the 2000s.

A 2007 inductee to the Winter Guard International Hall of Fame, outside of the drum corps arena, Gaines is an active designer, adjudicator and clinician for marching bands and color guards around the world.

His work in the marching arts both on and off the drum corps field has inspired designers of the past, present and future.

"We have seen many good designers and a handful of very good. Then there is the all-time list of drill designers," said Hall of Fame visual designer Marc Sylvester. "I believe that it is the quality and consistency of Michael's work that puts him in the league of the very best Drum Corps International has seen."