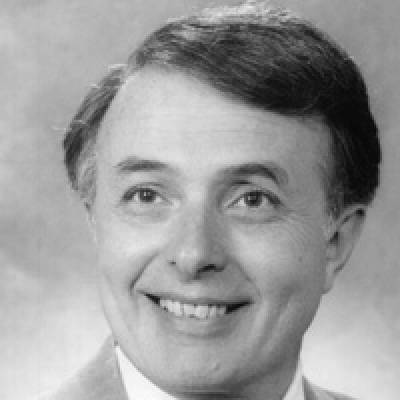 Hall of Fame member James Elvord '97 credits Raymond J. Baumgardt for raising Madison Scouts from their 'dark ages' of the 1960s; perhaps it's because Baumgardt's arrangements for the corps include "Alice in Wonderland," "Rhapsody in Blue" and "The Way We Were" - Madison staples during the time.

Wayne Downey '91 of Blue Devils remembers himself as an aspiring arranger, recalling in his nomination letter how he idolized Baumgardt's skill and compositional ability.
"[Ray] had immense vocabulary, range and could bring passion through writing technique," Downey wrote. "He taught me that virtually any style of music could be brought to the field without compromising the integrity of the original."

Baumgardt was the Madison Scouts' musical director from 1969 to 1979, but he also arranged for numerous other corps: Spirit of Atlanta, the Troopers, 27th Lancers and the Cavaliers, to name a few. Arranger Frank Dorritie said, "Not one of us has ever surpassed [Ray's] knack for sparking the connection between music and audience."

With his ability to arrange so many different styles, Baumgardt could take creative liberties while pleasing the crowd. And according to Paul Litteau '99, who was visual consultant with the Madison Scouts while Baumgardt was musical director, "the loud and long standing ovations still ringing through stadiums many years later give testimony to the audience appeal and accessibility of Ray's work."