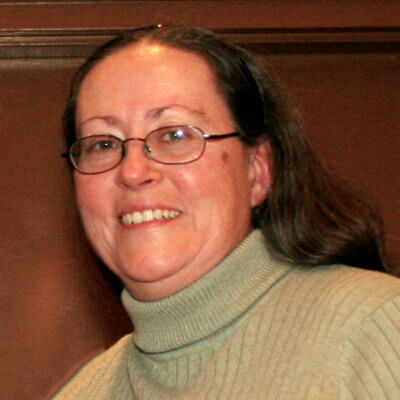 TJ Doucette has made an impression on the drum corps activity through more than 30 years of instructing the Blue Devils color guard.

Doucette was raised in a multi-generational drum corps family and started her marching career in the IC Reveries Junior Corps in Massachusetts, the predecessor to the 27th Lancers. She performed for an amazing 17 years before embarking on her teaching career for a variety of Boston area drum corps and winter guards. After moving to California in 1982, she began working with the Blue Devils B winter guard and four years later joined the staff of the Blue Devils color guard.

Doucette has made a significant contribution to the Concord, California corps winning an unprecedented 18 color guard caption awards during her tenure, which helped lead the corps to 12 of its DCI World Championship titles.

But the competitive success Doucette has achieved in her position is a mere side note to the lasting impression she's made on thousands of students she's taught, mentored and inspired.

“Her students have always been and continue to be her first priority, and her passion for them is unparalleled,” DCI Hall of Fame member Pete Emmons says. “Be it a sixth grader at a local educational clinic that picks up a flag, rifle, or saber for the first time, or a five-year veteran of a champion guard, her expectation is the same—Excellence. It's only her method and approach that changes to fit the needs of each student. I have never seen a teacher who can adjust to abilities with such ease and proficiency.”

DCI Hall of Fame member Shirley Stratton Dorritie, added, “She has achieved this by providing a growth-focused, positive, and educational program—from which her hundreds of students have emerged ready to step into positions of leadership and responsibility.”

“TJ's leadership, knowledge, and patience as an educator is the best in the business,” 2016 DCI Hall of Fame inductee Denise Bonfliglio said. “It's an extremely difficult endeavor to mold the lives of young adults who have a vision and a dream to be the best in all they set out to do. Breaking bad habits, teaching focus, new skills, stamina, and professionalism is no small task when you're at the top of the competitive ladder.”

In addition to Doucette's time with the Blue Devils, she has also worked with a variety of other top WGI Sport of the Arts, high school and international color guards. She has presented educational clinics across the United States and in South America, Europe, and Asia.