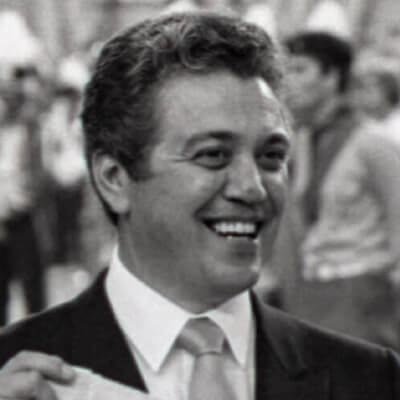 Drum Corps International owes much of its early growth and survival to the efforts and dedication of Donald L. Pesceone, who served as DCI's first full-time executive director from 1973 to 1994.

Pesceone had been involved with drum corps since he was a child, playing French horn in a variety of Chicagoland groups; as a youth in Park Ridge's Mel Tierney American Legion Drum and Bugle Corps and the Skokie Vanguard, and later in Maywood's Winfield Scott Rebels Senior Corps.

He also served the Skokie Vanguard as a marching instructor and drill designer and became the corps' business manager in the early 1960s. His talents in the field led him to be in demand with other corps, including the Stockton Commodores in California and the Salina Silver Sabres and Argonne Rebels, both from Kansas. He became a Marching and Maneuvering judge for the All-American and Central States Judges Association and was one of the first inductees of the CSJA Hall of Fame.

"When it was time for the DCI Board of Directors to hire a full-time executive director, we felt comfortable in offering the position to Don because he had a stellar reputation as a fair judge, treating all corps the same. He gave up a good job to work for DCI," former Madison Scouts director and 1994 Hall of Fame inductee Bill Howard said.

When Pesceone accepted the position as DCI's executive director, he and his wife Mary first ran the organization out of their home. Soon, more people needed to be hired to handle such elements as show promotion throughout the United States and Canada, public relations, and merchandising, requiring the move into DCI's first headquarters in the suburbs of Chicago.

"Don deserves a lot of credit for sticking his neck out and taking the job,"" says Cavaliers founder Don Warren. ""None of us knew upfront if DCI was going to be successful. He did a good job during his two decades at the helm."

One of Pesceone's proudest accomplishments was helping to establish additional tiered divisions within DCI, encouraging smaller and/or less experienced corps to compete with organizations much like their own in what is now known as the Open Class division.

Pesceone was one of the first to be inducted into the DCI Hall of Fame, enshrined in 1986, its second year of existence.