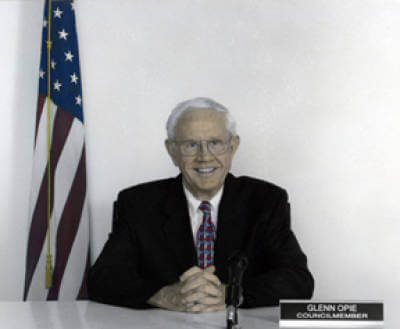 Lots of Americans would probably love to give their own governor a bloody nose. But Glenn Opie, who was elected to the Drum Corps International Hall of Fame by the Hall of Fame Legacy Committee back in February, is probably only one of a few who can actually brag about that feat.

The incident happened when Opie's corps, the Argonne, Kan., Rebels (he was that corps' director from 1949 to 1973), was invited to Topeka for a State American Legion parade, and a performance at a banquet that then-Kansas Gov. Bill Avery would be attending.

Opie said, "As usual, I went banquet hall to determine how to bring in the corps, what doors to use, etc. The governor that day was to hand us a proclamation proclaiming the Argonne Rebels as 'Kansas' Official Drum and Bugle Corps.' There were two closed double doors midway along the wall of the banquet room. I felt it necessary to enter through these heavy doors, so in a bit of a hurry, and with more than the usual effort, I hurled myself against the left door to bank it open, and back against the interior wall of the room.

"Unknown to me, Gov. Avery was standing about three feet to the left of the hinged door, which swung back against the wall with considerable force. All I heard was a 'thud,' and upon looking around the opening, discovered the governor with a bloody nose.

"Fortunately in those days there were no bodyguards, otherwise my drum corps career might have ended right there. But the governor was a good sport. He did, in fact, award us our proclamation, and I wasn't jailed or shot," Opie said.

Opie, a U.S. Navy veteran, was a lawyer in Great Bend since 1956 and active in the Kansas legal community.

Opie's nomination was also backed by former U.S. Sen. Bob Dole (R-Kan.), who said, "I strongly support Glenn's election to the Hall of Fame. Doing so would bring recognition to a man whose presence is long overdue."

Shannon Stimson, who nominated Opie to the Hall of Fame, is now a political science professor at the University of California-Berkely. Stimson said that Opie's influence on the young people who marched under him should be remembered, rather than his success directly on the field. "I would suggest that it is not simply his ability to produce championships that should be recalled, but rather the almost singular impact he had on the lives of more than 1,700 young people who moved through the corps and out into life under his supervision," Stimson said in Opie's nomination letter.