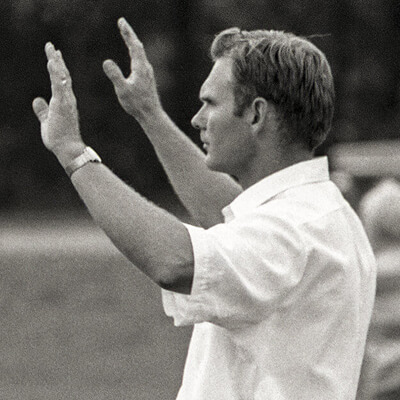 William “Bill” Howard was a longtime director of Madison Scouts and one of the founding directors of Drum Corps International.

A 1994 inductee into the DCI Hall of Fame, Howard got his start with the Madison Scouts organization as a soprano bugler in the early 1950s. From that point on, he was never far from the corps and continued as a strong supporter of both the Scouts and Drum Corps International.

According Madison Scouts Executive Director Chris Komnick, “There has never been someone who has dedicated, literally, an entire lifetime to this organization, a dedication that extended more than six decades. Virtually every living Madison Scout has felt his influence.”

When Howard became director of the Madison Scouts in 1969, he found a corps just barely hanging on, with only 17 brass players attending the first rehearsal. His diligence ushered in a new era of excellence that led to the Scouts’ first DCI World Championship title in 1975.

In 1971, along with four other directors, he co-founded the Midwest Combine, the predecessor to the creation of Drum Corps International the following year. As part of the Combine, Howard strongly felt that corps needed to take control of their own destinies, and that doing so would lead to a new age of drum corps. It did.

“Bill will be remembered as an icon, an innovative force in the creation of DCI and an example of leadership,” said DCI Hall of Fame member James Elvord, who marched under Howard’s tutelage. Elvord later became one of the corps’ horn instructors, helping to develop the group into one of the most iconic brass lines of the 1970s. “Under Bill, the Scouts developed into the crowd favorite known today.”

DCI Hall of Fame member Mary Pesceone helped nurture DCI through its first decades, along with her husband, the late Don Pesceone. She remembers Howard fondly as “a gentle man, a very quiet man, and very focused on whatever he wanted to do or say. He always believed in drum corps kids and was astounded at what they could do, and so he kept presenting them with remarkable tasks while encouraging them to continue succeeding on a continuing higher level. I adored him.”

Cavaliers founder Don Warren remembers Bill as “a sincere leader,” adding, “He was easy to work with and was quite a congenial person, a high class person.”

Howard and Warren used to meet in each other’s homes to discuss the future of the drum corps activity. “We worked together on rules changes and what we wanted to try,” Warren said. “I told him I wanted the Scouts to be right up there and a strong second to us, and he’d laugh about that. We thought pretty much alike, as he was all about drum corps and the kids. He worked hard to get the best corps possible on the field.”

Upon leaving the role of Madison Scouts director after the 1980 DCI season, Howard spent three decades assisting in the management of the corps’ finances, many of those years while serving on the organization’s board of directors.