They're the drivers. The cooks. Even sometimes the lawn mowers. They're Drum Corps International volunteers, the unsung heroes of the marching music activity. After a nomination period and selection process by a panel of Friends of DCI members, the following individuals have been named 2012 Volunteers of the Year. They'll all be honored for their contributions during the 2012 DCI World Championships in Indianapolis. 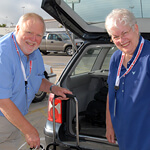 Tom & Peggy Kosin
The Kosins have been Drum Corps International aficionados since their four children began marching in the mid 1970s. Each has played a part in Drum Corps International history. Peggy worked for many years at the DCI headquarters and was one of the first administrators of the Friends of DCI donor program. Tom developed and programmed the software that is used to input the scores from judges at each of DCI's competitions that then calculates the winner and other placements. During DCI's biggest shows of the season, you'll find Tom and Peg locked away in the press box or another secluded room in the stadium tabulating the scores as they come in from the judges. And late at night they'll be waiting on results from events across the country to input them into the system to reported and displayed on the web at DCI.org. "It is an intricate process involving many details to ensure its accuracy, and these two manage the system and execution, flawlessly," said Sue Kuehnhold, Director of Events and Corps Relations at Drum Corps International. "For more than two decades they've tirelessly worked behind the scenes, and every corps, corps member, judge, and fan has been impacted by their work often without even realizing it." The 2012 season will be the last that the Kosins will be able to volunteer in the same capacity for Drum Corps International. "There will be big shoes to fill upon their departure," Kuehnold said. "By handling this crucial component of competition for the drum corps activity, they've filled an important role for the thousands of members who have come through the ranks under their watch." 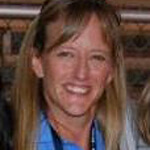 Sarah (Kehrt) Bowling
Sarah Bowling has been part of the Blue Devils family since her children joined the Blue Devils C Corps in 2000. Her involvement includes instructing, fundraising, driving, cooking, sewing uniforms and securing housing for the corps. She's even mowed the football fields at Mars, the Blue Devils' outdoor rehearsal facility. "Sarah has volunteered and donated an abundance of time and money to all three corps in the Blue Devils organization," said Rick Odello, director of the Blue Devils B and C corps. "She was the driving force in receiving a grant for the purchase of an equipment truck for the C corps." Bowling currently serves as tour manager for Blue Devils B. She's responsible for coordinating all kinds of logistical considerations including the corps' housing, transportation and more. "Her loyalty to the organization and the drum corps activity is unsurpassed," Odello said. "She has been a personal mentor and adviser to me for many years." 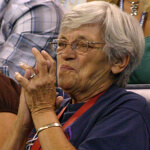 Mary DeSchepper
She's known as "Grandma" to some. Others know her as half of "Bobenmary," referring to her and husband Bob. DeSchepper has been a drum corps volunteer since 1983, since her children marched as members of the Geneseo Knights. She became involved with the Colts when they leased another corps' kitchen trailer, which included Bob and Mary as a "package deal." DeSchepper was nominated by Colts Executive Director Greg Orwoll and Colt Cadets Director Vicki Schaffer. With the Colts, DeSchepper manages the souvenir program, organizes rides for members to and from rehearsal camps, sews, cooks, shops for supplies, counsels and does whatever else is needed. "Most important is the time she spends one on one with people who need a helpful heart," Orwoll said. "She has 'saved' numerous individuals from giving up when struggling to acclimate themselves to life on the road with the corps." In her nomination letter, DeSchepper was described as representing the essence of everything right about drum corps: Do it right, do it on time, give it your best for the betterment of the group, never give up, and always – always – remember the kids first. Learn more about attending the 2012 DCI World Championships to congratulate these volunteers.