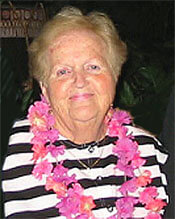 Patsy Bonfiglio
Margaret "Patsy" Bonfiglio, co-founder of the 27th Lancers, passed away early Friday morning at the Beth Israel Hospital in Boston. She was 76. Founded in 1967 by Bonfiglio and husband George, the 27th Lancers of Revere, Mass. competed as a Drum Corps International member corps from 1972 to 1986. Bonfiglio is survived by her husband, four children, and several grandchildren, among others. A wake will be held on Monday, June 2 at Vertuccio Funeral Home in Revere, Mass. The funeral will be Tuesday, June 3 at Immaculate Conception Church, also in Revere. Read full details on BostonHerald.com. Read more on 27thLancers.net.